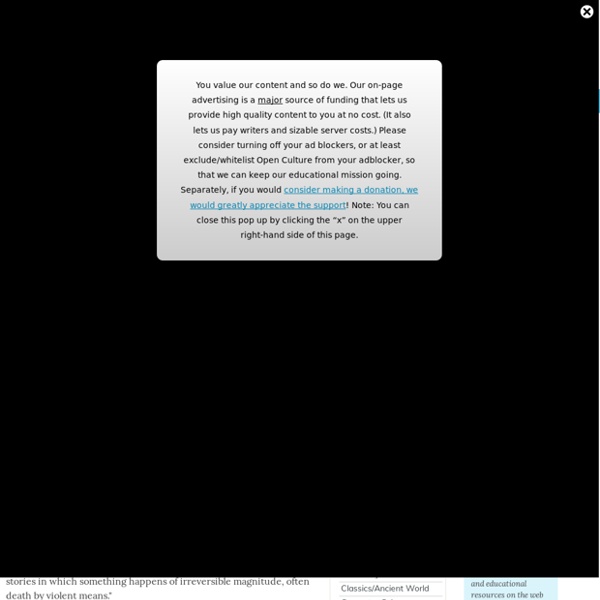 Flannery O'Connor was a Southern writer who, as Joyce Carol Oates once said, had less in common with Faulkner than with Kafka and Kierkegaard. Isolated by poor health and consumed by her fervent Catholic faith, O'Connor created works of moral fiction that, according to Oates, “were not refined New Yorker stories of the era in which nothing happens except inside the characters' minds, but stories in which something happens of irreversible magnitude, often death by violent means." In imagining those events of irreversible magnitude, O'Connor could sometimes seem outlandish--even cartoonish--but she strongly rejected the notion that her perceptions of 20th century life were distorted. In April of 1959--five years before her death at the age of 39 from lupus--O'Connor ventured away from her secluded family farm in Milledgeville, Georgia, to give a reading at Vanderbilt University. The grandmother didn't want to go to Florida. Related Content: Related:  Read, Write, Reflect

Mind Matters One Simple Idea: How Positive Thinking Reshaped Modern LifeBy Mitch HorowitzCrown Publishing, 2014352 pp.; $24 cloth George Orwell once wrote that you had to be a part of imperialism in order to hate it. A comparable sentiment drives author and editor Mitch Horowitz’s inquiry in One Simple Idea: How Positive Thinking Reshaped Modern Life. This temperament sets One Simple Idea apart from recent takedowns of the movement such as Bright-Sided: How Positive Thinking is Undermining America, social critic Barbara Ehrenreich’s bald rejection of the cult-like mandate to treat her breast cancer with a positive attitude, and journalist Oliver Burkeman’s exploration of a “negative path” to happiness in The Antidote: Happiness for People Who Can’t Stand Positive Thinking. And so it is that Horowitz, sans rose-colored glasses, attempts to record the lineage of the American positive thinking movement. More useful as part of these works would have been testimonials.

E316K -- Bremen I think that if there is any value in hearing writers talk, it will be in hearing what they can witness to and not what they can theorize about. My own approach to literary problems is very like the one Dr. Johnson's blind housekeeper used when she poured tea–she put her finger inside the cup. These are not times when writers in this country can very well speak for one another. In the twenties there were those at Vanderbilt University who felt enough kinship with each other's ideas to issue a pamphlet called, I'll Take My Stand, and in the thirties there were writers whose social consciousness set them all going in more or less the same direction; but today there are no good writers, bound even loosely together, who would be so bold as to say that they speak for a generation or for each other. The social sciences have cast a dreary blight on the public approach to fiction. Henry James said that Conrad in his fiction did things in the way that took the most doing.

The Short Story Podcasts Broadening the number of resources The Short Story brings its readers, we are extremely pleased to provide this set of podcasts, courtesy of the Florida Centre of Instructional Technologies (FCIT) from the University of South Florida (USF). In due time, we hope to provide a greater number and range of podcasts to TSS. If you would like to offer your own recordings, please contact us as at info@theshortstory.co.uk to discuss the details. This set of twenty five short story podcasts is from Sherwood Anderson’s influential short story collection Winesburg, Ohio (1919). Source: Anderson, S. (1919) Winesburg, Ohio. New York, NY: B.W. 1.The Book of the Grotesque An aging writer ponders the many people he has met and the stories he has heard in his lifetime. Audio Player 2. 3. 4. 5. 6. 7. 8. 9. 10. 11. 12. 13. 14. 15. 16. 17. 18. 19. 20. 21. 22. 23.Death, concerning Doctor Reefy and Elizabeth Willard As her life comes to a close, Elizabeth Willard shares her life experiences with Doctor Reefy.

Baby boomer humor’s big lie: “Ghostbusters” and “Caddyshack” really liberated Reagan and Wall Street I am going to start with three beloved movies of my childhood, and end with a suggestion of why liberals will probably never be able to come to grips with what they winningly call “inequality.” The three movies I have in mind—”National Lampoon’s Animal House,” “Caddyshack,” and “Ghostbusters”–were all written or directed, in whole or in part, by the great Harold Ramis, who died last week, and whose work was eulogized by President Obama as follows: When we watched his movies . . . we didn’t just laugh until it hurt. We questioned authority. We identified with the outsider. That seems about right, doesn’t it? So, the political equation is obvious, right? Well, no. Start with the first really great movie Ramis had a hand in writing, “National Lampoon’s Animal House.” Drink, take and lie: translate it into Latin and it could be the motto of the One Percent. And that makes for a pretty liberal film, right? Well, free-market conservatives do. These two developments are not unconnected.

O'Connor on "A Good Man is Hard to Find" Short Story Criticism Thomas Votteler Editor Total Number of Volumes in Set: 21 Gale Research, Inc.: Detroit 1990 Flannery O'Connor (essay date 1963) [O'Connor delivered the following remarks at a reading she gave at Hollins College, Virginia on14 October 1963. Much of my fiction takes its character from a reasonable use of the unreasonable, though the reasonableness of my use of it may not always be apparent. Flannery O'Connor, "On Her Own Work," in her Mystery and Manners: Occasional Prose, edited by Sally Fitzgerald and Robert Fitzgerald, Farrar, Straus and Giroux, 1969, pp. 107-18.

Omniscient Gentlemen of The Atlantic | | Notebook Maureen Tkacik [from The Baffler No. 19, 2012] Shepherd, show me how to go O’er the hillside steep, How to gather, how to sow,— How to feed Thy sheep. –Mary Baker Eddy Not long before The Atlantic’s parent company announced its swing into a profit-making business model despite operating in the most moribund corner of a publishing industry, I sat in a glass-paneled press room next to a small auditorium on the second floor of the Washington Newseum and took in the incipient profitability. The din of younger colleagues tapping keyboards is never soothing, but sitting in the press room of the Ideas Forum felt like a human rights violation. [New York Times financial correspondent] rankles [Treasury Secretary] with questions such as “What do you think is the most important thing the team has gotten right?” Omniscience is the operating principle by which everyone understands everyone else in Washington, D.C. Quinn wore a light beige pantsuit with a pink blouse that conjured the seventies.