50 Questions That Will Free Your Mind 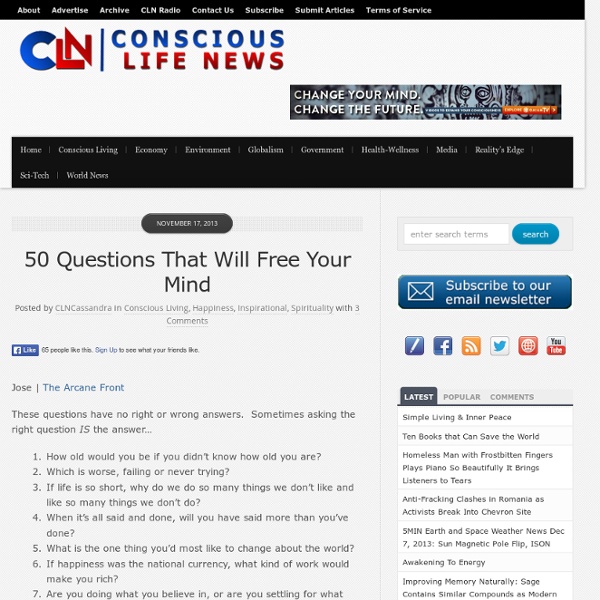 This Moment By Leo Babauta We all suffer, every day: worry, procrastination, anxiety, feeling overwhelmed, irritated, angry, frustrated, wishing things were different, comparing ourselves to others, worried we’re missing out, wishing other people would be different, feeling offended, loneliness, fear of failure, not wanting to do something, wishing we had less fat or bigger boobs or bigger muscles, angry at being controlled, wanting to find the perfect someone, wishing our partner was more perfect, stressed about finances, not wanting to think about problems, not knowing how to fix things, uncertain about choices, rushing from one task to the next, not liking our jobs. And yet, these problems are self-created. They’re real, but our tricky minds have created them. Try this, for a minute: let all of that go for a moment, and just pay attention to the physical things around you right now. See this moment as it is, without all the things you’re worried/frustrated/angry about. It is perfect, as it is.

Eye Sharpening - Photoshop Tutorial With this tutorial you can create amazing, bright eyes within minutes. First retouch, adjust levels and do all necessary colour corrections on your image. With a Lasso Tool (L) select the eyes (hold Shift key to add to selection). Hit Ctrl+J to copy selection to a new layer. Use Smart Sharpen filter on the eyes, the choice of right settings will depend on the size of your file. Add a layer mask to the sharpened layer, then using a white soft brush on 50% bring back paint only iris’ and pupils to expose the sharpened eyes. Using levels brighten the whole picture and then copy mask from previous layer to select only eyes by holding Alt while dragging the sharpened mask (“layer 1” in the pic) onto the “levels 2” layer. With a Colour Balance set desired eye colour, keep “Preserve Luminosity” ticked, again use copy of previously created mask to select eyes only. Reduce opacity of the colour layer to make the eyes look more natural. And voilà, the image is ready.

World Building World Building is fun. It can also be a nightmare. How can one person possibly create an entire world? There's just so much to consider. If you miss something, your world may not feel real to your readers then, your story fails. Hopefully, the links below will make the process a little easier. Templates Below are some awesome sites with amazing details about each characteristic of World Building. SFWA: Fantasy World Building QuestionsCreating Fantasy and Science Fiction WorldsConsider WorldbuildingBerley’s Top 10 World Building Tips for Sci Fi or FantasyInkwell Ideas: Worldbuilding: Local Area DesignSquidoo: Fantasy Worldbuilding Resources Darkness/Dark-side Defined (Physical and Psychological) For some reason, I've always been facinatd by darkness. Dictionary.com: DarknessMerriam-Webster: DarknessEssential Secrets of Psychology: "What is the Shadow?" Characters, Creatures & Powers Most dark fantasy stories have some sort of non-human character. Setting I'm a visual person. Government

Top 10 Thinking Traps Exposed — How to Foolproof Your Mind, Part I Our minds set up many traps for us. Unless we’re aware of them, these traps can seriously hinder our ability to think rationally, leading us to bad reasoning and making stupid decisions. Features of our minds that are meant to help us may, eventually, get us into trouble. Here are the first 5 of the most harmful of these traps and how to avoid each one of them. 1. “Is the population of Turkey greater than 35 million? Lesson: Your starting point can heavily bias your thinking: initial impressions, ideas, estimates or data “anchor” subsequent thoughts. This trap is particularly dangerous as it’s deliberately used in many occasions, such as by experienced salesmen, who will show you a higher-priced item first, “anchoring” that price in your mind, for example. What can you do about it? Always view a problem from different perspectives. 2. In one experiment a group of people were randomly given one of two gifts — half received a decorated mug, the other half a large Swiss chocolate bar. 3. 4.

Mind42.com - Collaborative mind mapping in your browser The Elements of Change ‘Without accepting the fact that everything changes, we cannot find perfect composure. But unfortunately, although it is true, it is difficult for us to accept it. Because we cannot accept the truth of transience, we suffer.’ ~Shunryu Suzuki Post written by Leo Babauta. Change can be a difficult thing. I’m happy to report that after years of studying it, I’ve become fairly good at it (though happily failing all the time). What have I learned from my changes? It can be incredibly difficult, or it can be wonderfully joyous. My Recent Changes I’ve made dozens of changes over the last few years (read My Story for a partial list), but here’s a short list of a few I’ve made just this year: Lost over 40 lbs since last year. Again, this is a short list — there are others that are less noteworthy, and probably a few I’m forgetting. The Elements of Change So what’s the joyous path to making these changes and others? 1. 2. 3. 4. 5. 6. And lastly One last note, to anyone making changes: you will fail.

10 Mind-Blowing Theories That Will Change Your Perception of the World | Reality is not as obvious and simple as we like to think. Some of the things that we accept as true at face value are notoriously wrong. Scientists and philosophers have made every effort to change our common perceptions of it. The 10 examples below will show you what I mean. 1. Great glaciation is the theory of the final state that our universe is heading toward. 2. Solipsism is a philosophical theory, which asserts that nothing exists but the individual’s consciousness. Don’t you believe me? As a result, which parts of existence can we not doubt? 3. George Berkeley, the father of Idealism, argued that everything exists as an idea in someone’s mind. The idea being that if the stone really only exists in his imagination, he could not have kicked it with his eyes closed. 4. Everybody has heard of Plato. In addition to this stunning statement, Plato, being a monist, said that everything is made of a single substance. 5. 6. Enternalism is the exact opposite of presentism. 7. 8. 9. 10.

Intro to Playwriting So, you're going to write a stage play. First, what is a play? Basically, it's a blueprint for a stage production. It's performed by actors and directed, designed, and perhaps choreographed by others. As a collaborative art, a script is the cornerstone of a production from which the actors, designers, and directors all take their cues. You've probably seen a play before, if not on stage then one that's been adapted for TV or film. If you've ever glanced at the text of a play you'll see that it's pretty much all dialogue. Since a play is intended for performance, it adheres to some "unities" because of length limitations and the confines of the stage. Characters - You're going to want some, or else those actors will be very confused when they arrive for auditions. Setting - Where and when will your play take place? Stage Direction - This can be very confusing for both novices and professionals. An important thing to know is that stage directions are not narration. Do Include: