The Three Phases of Life 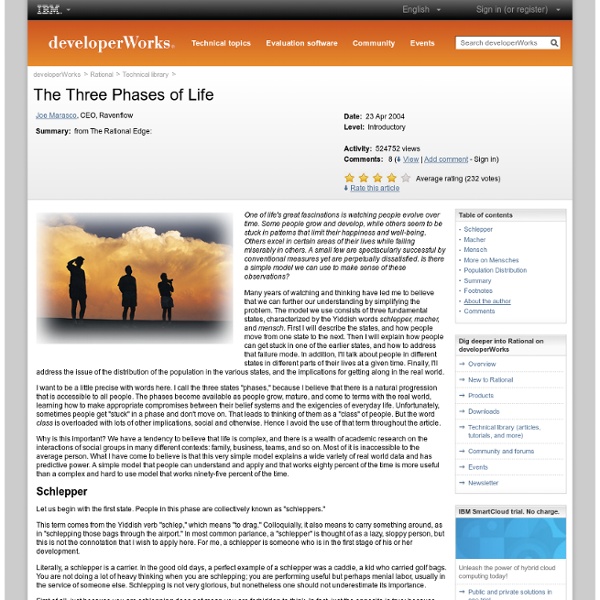 One of life's great fascinations is watching people evolve over time. Some people grow and develop, while others seem to be stuck in patterns that limit their happiness and well-being. Others excel in certain areas of their lives while failing miserably in others. A small few are spectacularly successful by conventional measures yet are perpetually dissatisfied. Is there a simple model we can use to make sense of these observations? Many years of watching and thinking have led me to believe that we can further our understanding by simplifying the problem. I want to be a little precise with words here. Why is this important? Schlepper Let us begin with the first state. This term comes from the Yiddish verb "schlep," which means "to drag." Literally, a schlepper is a carrier. First of all, just because you are schlepping does not mean you are forbidden to think. In general, we all need to schlep. Schleppers quickly perceive the great injustice of life. So, we all start out as schleppers.

36 Strange and Funny Google Street View Photos We wanted to post these awesome Google Street View photos a long time ago, but somehow they got lost along the way. Luckily, I found them while reading Twisted Sifter. We tried our best to find more cool examples of Google Street View images, however almost every source was pointing to Jon Rafman. Montreal based artist Jon Rafman isn’t the original photographer but instead he explores Google Street Views and takes screenshots of the most unusual and funny sights. The original images were taken by an army of Google’s hybrid electric automobiles, each one equipped with nine cameras on a single pole trying to photograph every highway and byway in the world. “The world captured by Google appears to be more truthful and more transparent because of the weight accorded to external reality, the perception of a neutral, unbiased recording, and even the vastness of the project,” said Jon in his interview to Art Fag City. Website: 9-eyes.com

Real Weddings I love the rich jewel-toned colors of this wedding! Captured by Jen Stewart Photography , Emilie and Anthony were married this past June in a gorgeous ceremony in a rose garden in Sacramento, California. The couple met during medical school and their ceremony was performed by a doctor friend/instructor. The ceremony aisle was decorated with trails of big blooms, leading to a bamboo chuppah draped in airy, white fabric. Rich, jewel tones and peacock feathers were used throughout the wedding party attire and decor. At the reception, lush floral arrangements decorated each table in the penthouse room. A few words from the bride: Anthony and I met during our first year of medical school at UC Davis.

5 Popular Beliefs That Are Holding Humanity Back Humans believe in a lot of stupid shit, and we do something stupid as a result of those beliefs about, oh, once every five seconds. And sure, most of you reading this are educated types who don't believe in Bigfoot or psychic readings, but there are a whole bunch of equally stupid/harmful superstitions out there that are so commonly held that we don't even think of them as such. Very few of us don't fall victim to at least a few of them. In fact, I'm something of an expert on this because I believe literally hundreds of idiotic things, and also because I wrote a ridiculous best-seller about an apocalypse brought about by people believing in apocalypses. #5. Jupiterimages/Photos.com/Getty Images The headlines will make a lot more sense to you once you understand one simple fact: About 60 percent of Americans believe that Jesus Christ and his angels will descend from heaven and destroy the planet, and about 40 percent of Americans think it will happen within the next few decades. #4. #3.

Kitchen I'm so excited to share with you this Orlando, Florida home! Not only is Marg Hyland a fellow turquoise lover (could you tell?!), but she's also a reader and long-time sponsor of my blog! I was thrilled when I learned she moved into this home! The house color and Key West Style were what Marg fell in love with first, and after moving in, she decided to fill the inside of the home with her favorite color too–which happens to match the branding of Pegeen, her children's formal wear company. In addition to the beautiful blues throughout, Marg decorated with pieces she's been collecting for years and years, as well as finds from Pier 1, Tuesday Mornings, Marshalls, flea markets and auctions. If you're in the market for flower girl dresses or ring bearer suits, definitely check out Pegeen! Love turquoise?

Bedroom Designs: Modern Interior Design Ideas & Photos Do you prefer plush padding a minimalist pillow, a decked-out design or toned-down interior? From dazzling abstract designs to humorously offbeat sleeping spaces here are seven brilliant bedroom designs to inspire your imagination. Who knows, with a few decorative adjusts you might be able to remodel your own bedrooms to similar effect. If you love soft illumination and hate to sacrifice privacy, this bedroom interior has a brilliant combination of strategies from uplighting around the bed itself to wall panels that block direct views and sunlight but let light in around them. If you are more of a minimalist, this simple bedroom space has a rhythmic modularity and combines soft white walls and ceiling with variegated wood furniture and furnishings for a pleasantly mixed aesthetic experience. At the opposite end of the spectrum, how would you like to have your bedroom be in the middle of your pool room?

Western Philosophy - Mind Map Garden House by David Guerra Email David Guerra is the Brazilian architect that redesigned the Garden House, a 1980′s house located in Brazil. This amazing house was constructed considering some important aspects like the interior/exterior integration which was planned to be bigger. This was possible using the garden day by day and it not only helped at the integration but also at the lighting of the rooms that used to be dark. To be suitable for the new owners the house was modernized adding new spaces that can be used in different ways. There was used a mix of styles including classics, ethnics, contemporaries and Brazilian references.

Internet troll personality study Medioimages/Photodisc In the past few years, the science of Internet trollology has made some strides. Last year, for instance, we learned that by hurling insults and inciting discord in online comment sections, so-called Internet trolls (who are frequently anonymous) have a polarizing effect on audiences, leading to politicization, rather than deeper understanding of scientific topics. That’s bad, but it’s nothing compared with what a new psychology paper has to say about the personalities of trolls themselves. It is hard to overplay the results: The study found correlations, sometimes quite significant, between these traits and trolling behavior. In the study, trolls were identified in a variety of ways. E.E. To be sure, only 5.6 percent of survey respondents actually specified that they enjoyed “trolling.” I have sent people to shock websites for the lulz. I like to troll people in forums or the comments section of websites. I enjoy griefing other players in multiplayer games.

10 Mind-Blowing Theories That Will Change Your Perception of the World Reality is not as obvious and simple as we like to think. Some of the things that we accept as true at face value are notoriously wrong. Scientists and philosophers have made every effort to change our common perceptions of it. 1. Great glaciation is the theory of the final state that our universe is heading toward. 2. Solipsism is a philosophical theory, which asserts that nothing exists but the individual’s consciousness. Don’t you believe me? As a result, which parts of existence can we not doubt? 3. George Berkeley, the father of Idealism, argued that everything exists as an idea in someone’s mind. The idea being that if the stone really only exists in his imagination, he could not have kicked it with his eyes closed. 4. Everybody has heard of Plato. In addition to this stunning statement, Plato, being a monist, said that everything is made of a single substance. 5. 6. Enternalism is the exact opposite of presentism. 7. So, what is the debate? 8. What’s the point? 9. 10.

suicide_note the boy who thinks too much. bedtime calculator Be lucky - it's an easy skill to learn Take the case of chance opportunities. Lucky people consistently encounter such opportunities, whereas unlucky people do not. I carried out a simple experiment to discover whether this was due to differences in their ability to spot such opportunities. I gave both lucky and unlucky people a newspaper, and asked them to look through it and tell me how many photographs were inside. On average, the unlucky people took about two minutes to count the photographs, whereas the lucky people took just seconds. Why? For fun, I placed a second large message halfway through the newspaper: "Stop counting. Personality tests revealed that unlucky people are generally much more tense than lucky people, and research has shown that anxiety disrupts people's ability to notice the unexpected. The experiment was then repeated with a second group of people, who were offered a large financial reward for accurately watching the centre dot, creating more anxiety.