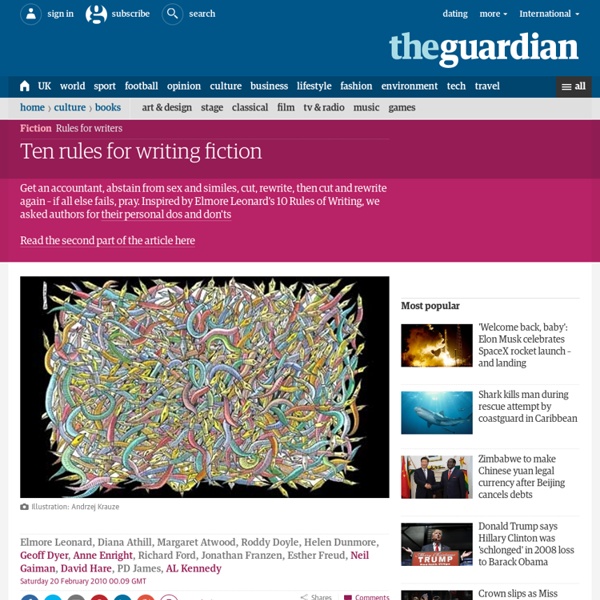 Elmore Leonard: Using adverbs is a mortal sin 1 Never open a book with weather. If it's only to create atmosphere, and not a charac­ter's reaction to the weather, you don't want to go on too long. The reader is apt to leaf ahead look­ing for people. There are exceptions. If you happen to be Barry Lopez, who has more ways than an Eskimo to describe ice and snow in his book Arctic Dreams, you can do all the weather reporting you want. 2 Avoid prologues: they can be ­annoying, especially a prologue ­following an introduction that comes after a foreword. 3 Never use a verb other than "said" to carry dialogue. 4 Never use an adverb to modify the verb "said" ... he admonished gravely. 5 Keep your exclamation points ­under control. 6 Never use the words "suddenly" or "all hell broke loose". 7 Use regional dialect, patois, sparingly. 8 Avoid detailed descriptions of characters, which Steinbeck covered. 10 Try to leave out the part that readers tend to skip. Diana Athill Margaret Atwood Roddy Doyle

Who wrote this amazing, mysterious book satirizing tech startup culture? A mysterious little book called Iterating Grace is floating around San Francisco right now. At least a dozen people have received the book in the mail—or in my case, by secret hand-delivery to my house. (Which is a little creepy.) The artifact itself consists of a 2,001-word story interspersed with hand-drawn recreations of tweets by venture capitalists and startup people like Chris Sacca, Paul Graham, Brad Feld, Sam Altman, and others. The story’s lead character, Koons Crooks, goes on a spiritual quest by contemplating the social media feeds emanating from the startup world. How to Write with Style: Kurt Vonnegut’s 8 Keys to the Power of the Written Word Find a Subject You Care About Find a subject you care about and which you in your heart feel others should care about. It is this genuine caring, and not your games with language, which will be the most compelling and seductive element in your style. I am not urging you to write a novel, by the way — although I would not be sorry if you wrote one, provided you genuinely cared about something. A petition to the mayor about a pothole in front of your house or a love letter to the girl next door will do. Do Not Ramble, Though

The Art Of The Rewrite So you’ve written your story, mulled over its potential problems, and even had it critiqued by friends or colleagues who’ve given you their praise, suggestions and ultimate diagnoses. You know your work has major issues that need addressed. Now what? 20 Common Grammar Mistakes That (Almost) Everyone Gets Wrong I’ve edited a monthly magazine for more than six years, and it’s a job that’s come with more frustration than reward. If there’s one thing I am grateful for — and it sure isn’t the pay — it’s that my work has allowed endless time to hone my craft to Louis Skolnick levels of grammar geekery. As someone who slings red ink for a living, let me tell you: grammar is an ultra-micro component in the larger picture; it lies somewhere in the final steps of the editing trail; and as such it’s an overrated quasi-irrelevancy in the creative process, perpetuated into importance primarily by bitter nerds who accumulate tweed jackets and crippling inferiority complexes. But experience has also taught me that readers, for better or worse, will approach your work with a jaundiced eye and an itch to judge.

9 Editing Tips that Make Your Writing Sparkle It’s often said that writing is rewriting. Banging out a quick first draft can be fun, but the real grunt work comes in revising your work. Here are nine editing tips that can help you polish your writing until it sparkles: 1. Expressions & Sayings Index If you prefer to go directly to the meaning and origin of a specific expression, click on its relevant entry in the alphabetical list below. Use this alphabet to speed up your search: A B C D E F G H I J K L M N O P Q R S T U V W X Y Z Data Mining Novels Reveals the Six Basic Emotional Arcs of Storytelling Back in 1995, Kurt Vonnegut gave a lecture in which he described his theory about the shapes of stories. In the process, he plotted several examples on a blackboard. “There is no reason why the simple shapes of stories can’t be fed into computers,” he said. “They are beautiful shapes.” The video is available on YouTube.

Spice Up Your Writing With Dialogue by Judy Cullins Does your chapter sound like a report? Does it go on and on with past tense sentences that tell, rather than show? Writer’s Digest - Writing Prompts Write a scene that includes a character speaking a different language, speaking in a thick accent, or otherwise speaking in a way that is unintelligibe to the other characters. (Note: You don't necessarily need to know the language the character is speaking—be creative with it!) Describe a character's reaction to something without explaining what it is. See if your fellow prompt responders can guess what it is. Write a story or a scene about one character playing a prank on another. Recently published titles 82nd & Fifth The Metropolitan Museum of Art (2013) "Abraham Lincoln: The Man (Standing Lincoln): A Bronze Statuette by Augustus Saint-Gaudens": Metropolitan Museum Journal, v. 48 (2013) Tolles, Thayer (2013) Afghanistan: Forging Civilizations along the Silk Road Aruz, Joan, and Elizabetta Valtz Fino (2012) "Amenhotep, Overseer of Builders of Amun: An Eighteenth-Dynasty Burial Reassembled": Metropolitan Museum Journal, v. 48 (2013) Reeves, Nicholas (2013) The American West in Bronze, 1850–1925 Tolles, Thayer, Thomas Brent Smith, with contributions by Carol Clark, Brian W.