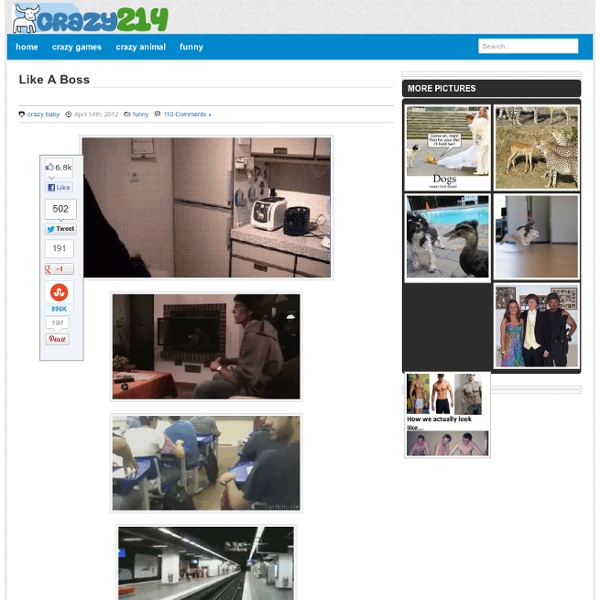 Moving slabs [This Dynamic Earth, USGS] The layer of the Earth we live on is broken into a dozen or so rigid slabs (called tectonic plates by geologists) that are moving relative to one another. "Historical perspective" 20 GIF Reactions to Real-Life Situations (9.26.11 Here’s a fresh round of animated GIFs that perfectly characterize how it feels when we encounter these everyday scenarios. When someone steps on the back of your shoe When someone you hate says something funny When you have too much sugar When you see your ex after the breakup When you’re in the back seat and the front windows are down

StumbleUpon The FBI’s Reading Room contains many files of public interest and historical value. In compliance with the National Archives and Records Administration (NARA) requirements, some of these records are no longer in the physical possession of the FBI, eliminating the FBI’s capability to re-review and/or re-process this material. Please note, that the information found in these files may no longer reflect the current beliefs, positions, opinions, or policies currently held by the FBI. Some Bizzare and Odd things around us… Beauty of the nature lies in viewer’s eyes. A photograph is just a way to show or represent that beauty. Here is a bunch of some wonderful pictures which are not only the example of beautiful photography but are also a photograph of some miracles happening in the world. You can also call it the creativity and innovation of photographer’s mind. I think it was at the peak while taking these pictures.

If the rest of this year's movie posters told the truth It's been far too long since our last movie poster TRUTH-BOMBING: here's a round-up of the remaining movies that have dodged our rapist rapier wit so far this year. Attention Stumblers! We have a new feature we think you'll like: If 2012's Oscar posters told the truth. In conclusion, I have far too much time on my hands.

Husband and target Husband banned from Target After I retired, my wife insisted that I accompany her on her trips to Target. Unfortunately, like most men, I found shopping boring and preferred to get in and get out. Equally unfortunate, my wife is like most women - she loves to browse. Yesterday my dear wife received the following letter from our local Target. Dear Mrs. 10 More Mysterious Conspiracy Theories Mysteries To date we have around seven conspiracy theory lists or lists containing entries related to such. This new list is a welcome addition as it has been some time since our last one and they are always extremely fascinating topics to read about. The world is full of conspiracy theories – many of which contain elements of mystery. This will definitely not be the last list of this type.

I Went on a Wizard Quest A few months ago, I had the most fun I have ever had in my entire life at a place called Wizard Quest in Wisconsin. I've been trying to explain exactly what it is to people ever since, but haven't had much luck. According to their website, it's a "13000-square-foot fantasy-themed labrynth (we call it the quadrasphere)." But that doesn't make it sound anywhere near as awesome as it actually is, so here's a blog about it. If you intend to visit this place in the near future, maybe don't read this blog. It's gonna have a lot of spoilers. What Is Globalization? Finally, a definition of globalization that one can understand and to which we now can relate: Question: What is the truest definition of Globalization? Answer: Bucket List: 225 Things to Do Before You Die 211. Zip Line in Monteverde, Costa Rica Zip line above and through the foggy, almost mystical cloud forests of gorgeous Monteverde in Costa Rica.

Awesome pictures from around the world Someone sent me these in a chain email, it was horribly formatted. I also do not know who made the comments, or how accurate they are. I take zero credit in the pictures, I just wanted to compile them nicely for all to see.