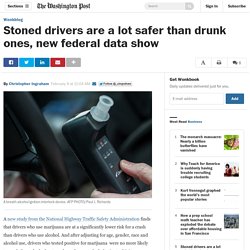 AFP PHOTO/Paul J. Richards A new study from the National Highway Traffic Safety Administration finds that drivers who use marijuana are at a significantly lower risk for a crash than drivers who use alcohol. And after adjusting for age, gender, race and alcohol use, drivers who tested positive for marijuana were no more likely to crash than who had not used any drugs or alcohol prior to driving. The chart above tells the story. A SWAT Raid Based On Faulty Information Kills a Man Over His ‘Huge Stash.’ Worth Maybe All of $2. In a sad case of investigative error, a man has tragically lost his life in a SWAT raid. 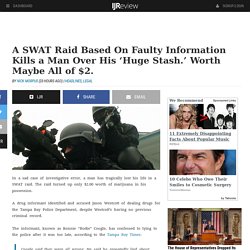 The raid turned up only $2.00 worth of marijuana in his possession. A drug informant identified and accused Jason Westcott of dealing drugs for the Tampa Bay Police Department, despite Westcott’s having no previous criminal record. $573 million in pot sales: 12 stats that defined cannabis' year. 24 maps and charts that explain marijuana.

Advertising Marijuana II: Political Distortions in Canada and the US - Cannabis Digest. Thought One. 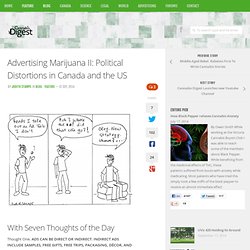 Sep 29, 2014 | By Alec Lately we've been seeing more and more medical applications of 3D printing appearing, many of which are revolutionary prosthetics or implants that are changing people's lives throughout the world. 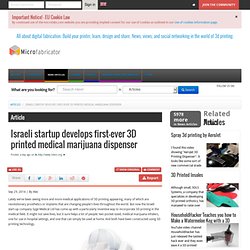 But now the Israeli start-up company Syge Medical Ltd has come up with a particularly inventive way to incorporate 3D printing in the medical field. It might not save lives, but it sure helps a lot of people: two pocket-sized, medical marijuana inhalers, one for use in hospital settings, and one that can simply be used at home. War On Drugs: 27 Reasons Why U.S. Doesn't Have The 'Moral Authority' To Lead It In Latin America. (Photo by Spencer Platt/Getty Images) Only 7 percent of Americans think the United States is winning the war on drugs, and few Americans are interested in throwing down more money to try to win, according to a Rasmussen Reports poll released in 2012. 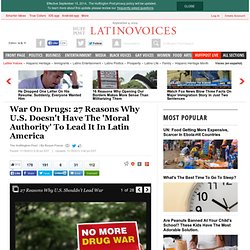 Mexican authorities seized almost 70,000 weapons of U.S. origin from 2007 to 2011. In 2004, the U.S. Congress declined to renew a 10-year ban on the sale of assault weapons. They quickly became the guns of choice for Mexican drug cartels. Because Most Americans Are Unenthusiastic About It Only 7 percent of Americans think the United States is winning the war on drugs, and few Americans are interested in throwing down more money to try to win, according to a Rasmussen Reports poll released in 2012. Mexican President Felipe Calderón drew international headlines this week when he said the United States didn’t have the “moral authority” to lead a drug war, after the states of Colorado and Washington legalized marijuana for recreational use. 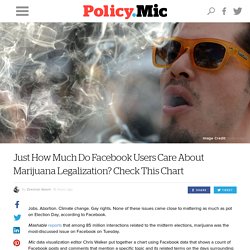 Abortion. Climate change. Gay rights. None of these issues came close to mattering as much as pot on Election Day, according to Facebook. Mashable reports that among 85 million interactions related to the midterm elections, marijuana was the most-discussed issue on Facebook on Tuesday. Mic data visualization editor Chris Walker put together a chart using Facebook data that shows a count of Facebook posts and comments that mention a specific topic and its related terms on the days surrounding the election. Could hemp nanosheets topple graphene for making the ideal supercapacitor? As hemp makes a comeback in the U.S. after a decades-long ban on its cultivation, scientists are reporting that fibers from the plant can pack as much energy and power as graphene, long-touted as the model material for supercapacitors. 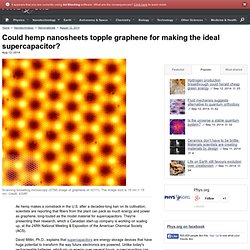 They're presenting their research, which a Canadian start-up company is working on scaling up, at the 248th National Meeting & Exposition of the American Chemical Society (ACS). David Mitlin, Ph.D., explains that supercapacitors are energy storage devices that have huge potential to transform the way future electronics are powered. Welcome to the Cannabis States of America 2014 ~ Greentaag. Arianna Huffington is part of the marijuana majority. Are you? Alaska Becomes Fourth State To Legalize Recreational Marijuana. Alaska legalized recreational marijuana for adult use on Tuesday, becoming the fourth state in the nation to do so. 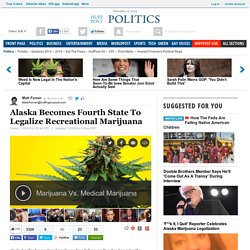 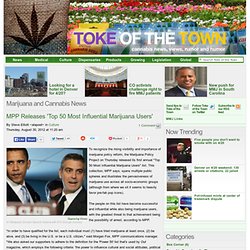 How to Make Weed Vodka, aka ‘Green Dragon’ The Green Dragon ranks as one of the more elusive DIY methods of getting high. 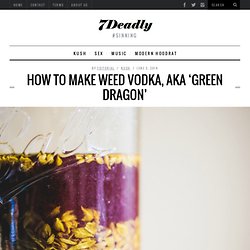 The cannabis tincture is a simple enough concept but the methods of creating this weed vodka varies depending on who you ask. From throwing stems into a half-full bottle of Smirnoff and letting it soak for a few weeks to speeding up the process by heating it in an oven, the recipe for Green Dragon depends on who’s making it. Looking to find the most straightforward, stoner-friendly recipe, we went with the soak-and-wait route. For the extract, use an alcohol that’s at least 60 proof — Bacardi, Smirnoff, etc. - StumbleUpon. Marijuana Policy and Effects. Many opponents of medical marijuana make much of the purported link between marijuana use and mental illness. But there is simply no compelling evidence to support the claim that marijuana is a causal risk factor for developing a psychiatric disorder in otherwise healthy individuals.

Most tellingly, population-level rates of schizophrenia or other psychiatric illnesses have remained flat even when marijuana use rates have increased. Emerging evidence indicates that patients who have tried marijuana may show significant improvements in symptoms and clinical outcomes (such as lower mortality rates and better cognitive functioning ) compared with those who have not. 8 Exotic Marijuana-Infused Delectables That Put Simple Pot Brownies to Shame. Photo Credit: Kzenon / Shutterstock.com September 3, 2014 | Like this article? Join our email list: Stay up to date with the latest headlines via email.