50 Americans Summarize Their Home State In One Perfectly Sarcastic Sentence. Funny Vines - Freakin weirdo. He needs a Xanax. Crossover gold. 22 Signs You've Found Your Best Friend Forever. You just got REICHROLL'D!! A few of my favorites. As a resident of the Midwest. Creative Cursing! Art Part 11. Nacho Diaz. Every year I take seductive Valentine's Day Photos. Here is this years. (Original Content) Why I can’t smoke weed, as told by animals. Nov 16, 2012 First I’m like, Oh this is fun, let’s eat cookies… Then someone says something funny and I’m like, Oh shit, this is so great… And I start really laughing… And laughing even harder… And at some point I realize I’m laughing too hard…. 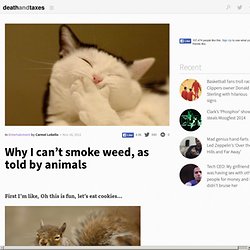 This list includes unique or extremely rare circumstances of death recorded throughout history, noted as being unusual by multiple sources. Some of the deaths are mythological or are considered to be unsubstantiated by contemporary researchers. Oxford Dictionaries defines the word "unusual" as "not habitually or commonly occurring or done" and "remarkable or interesting because different from or better than others. "[1] Some other articles also cover deaths that might be considered unusual or ironic, including List of entertainers who died during a performance, List of inventors killed by their own inventions, List of association footballers who died while playing, List of professional cyclists who died during a race and the List of political self-immolations. Antiquity[edit] Middle Ages[edit] Renaissance[edit] 18th century[edit] 19th century[edit] 20th century[edit]

Why I Should Touch Your Butt: A Powerpoint Presentation. This Is What Friends Are For… Thanksgiving as a kid VS Thanksgiving as an adult. All artwork and content on this site is Copyright © 2014 Matthew Inman. 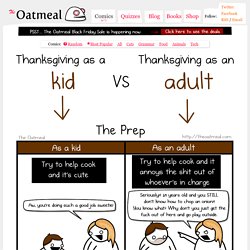 When you break up with someone: When someone on Facebook is fishing for compliments: When you’re in the club with a friend: When your arm falls asleep and you try to use it: When someone tricks you into watching a gross video: 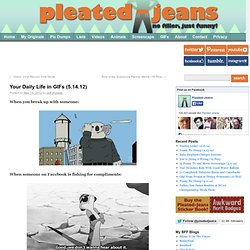 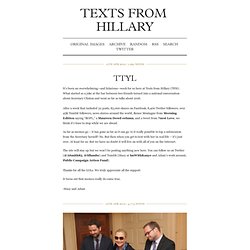 What started as a joke at the bar between two friends turned into a national conversation about Secretary Clinton and went as far as talks about 2016. After a week that included 32 posts, 83,000 shares on Facebook, 8,400 Twitter followers, over 45K Tumblr followers, news stories around the world, Renee Montagne from Morning Edition saying “ROFL,” a Maureen Dowd column, and a tweet from ? Uest Love, we think it’s time to stop while we are ahead. As far as memes go – it has gone as far as it can go. Is it really possible to top a submission from the Secretary herself? The site will stay up but we won’t be posting anything new here. 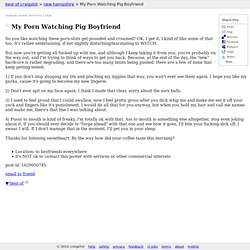 OK, I get it, I kind of like some of that too. It's rather entertaining, if not slightly disturbing/fascinating to WATCH. But now you're getting all fucked up with me, and although I keep taking it from you, you're probably on the way out, and I'm trying to think of ways to get you back. Because, at the end of the day, the "new" hardcore is rather degrading, and there are too many limits being pushed. Here are a few of mine that keep getting tested: 1) If you don't stop slapping my tits and pinching my nipples that way, you won't ever see them again.

The Meaning of Life. By Cliff Pickover The differences between men and women. 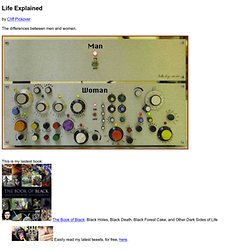