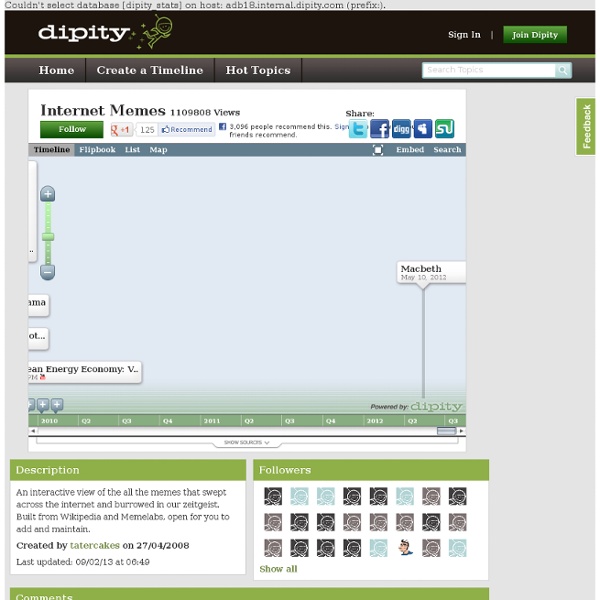 Trololololololololololo man Feb 28, 2010 6:00 PM Added to Youtube in November of 2009 the Video "Я очень рад, ведь я, наконец, возвращаюсь домой" had only few views until it was posted into several music blogs in march of 2010. In a week more than 1 million people watched the Trololololololololololo man sing his song. The title translates into 'I am very glad, because I’m finally back home'. The Singer is called Eduard Anatolyevich Khil born in 1934 who performed this song at a TV-Show in 1976. Why won't my parakeet eat my diarrhea? Nov 11, 2009 9:00 AM "Why won't my parakeet eat my diarrhea?" George W Bush shoes attack in Bagdad Dec 14, 2008 An Iraqi journalist hurled his shoes at Mr. Jizz in my pants Dec 7, 2008 Sickie Woo - Busted with the help of Facebook Oct 21, 2008 Chairman cracks under pressure SABC 2 Live with Chairperson of the finance portfolio committee - Nhlanhla Nene LHC is 42 Sep 11, 2008 11:19 PM The Large Hadron Collider is the answer to life, the universe, and everything Aug 5, 2008

Mimicry - Dean McNamee Mimicry Interactive Lamp November 2010 Mimicry is a lamp that imitates the color of objects. It consists of two individual and self contained objects — the lamp and the color sensing eye. The Lost Generation: A Decade of Teen Movies The best teen movies reflect modern youth culture and alter it—they transform the vernacular, fashion, and the trajectory of the genre itself. They are original and smart (even mid-dick joke). Some are raunchy comedies, some are stark dramas, some defy classification, but all are unflinchingly honest (even mid-dick joke).

iPrison — Vivid imagery of technology as dismal jails [3 pictures] Designer Felipe Luchi created these three images for the magazine Outside to show the depressing power we sometimes let the technological advances of the digital age have over us… (Click the images to enlarge them. Look for each prison’s tiny escapee.) (via Gizmodo, Reddit) Sound Types FindSounds Search the Web for Sounds What types of sounds can be found on the Web using FindSounds? Below is a partial list. Things People Said: Courtroom Quotations The following quotations are taken from official court records across the nation, showing how funny and embarrassing it is that recorders operate at all times in courts of law, so that even the slightest inadvertence is preserved for posterity. Lawyer: "Was that the same nose you broke as a child?"Witness: "I only have one, you know." Lawyer: "Now, Mrs. Johnson, how was your first marriage terminated?"

2011 Comic-Con Cosplay Winner: Lady Two-Face Out of all the cosplay costumes at this year's San Deigo Comic-Con, this one easily takes the cake. The makeup on Lady Two-Face is flawless and the transformation between both sides of her face is shockingly awesome. Edit: Thanks to Reddit user sweetloris, we found out who Lady Two-Face really is! Her name is Meagan Marie and according to her website, she works at Crystal Dynamics by day, reads comics at night, and runs around in costumes on the weekend. Sounds like the perfect woman... Special thanks to the Reddit community for always being so helpful!