Awesome Inventions - Your daily dose of geeky gadgets! Funny & Stupid Customer Quotes. Make Your Wizard and Play for Free! Piazza di popolo, rome, italy. Welcome to the Globulos multiplayer flash online game where the fun never stops ! Six Billion Secrets - Everyone Has a Secret. What's Yours? Feed your inner child. This Terrifying Raptor Chase Is the Most Traumatic Prank of All Time. Stop! Police. 10 stupid questions that police ask when they stop you in your car and 10 suitably stupid replies* 1) ‘Can you step out of the vehicle please?’ 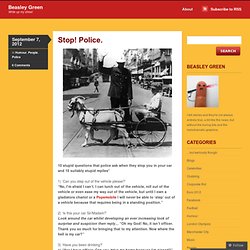 “No, I’m afraid I can’t. I can lurch out of the vehicle, roll out of the vehicle or even ease my way out of the vehicle, but until I own a gladiators chariot or a Popemobile I will never be able to ‘step’ out of a vehicle because that requires being in a standing position.” 2) ‘Is this your car Sir/Madam?’ Look around the car whilst developing an ever increasing look of surprise and suspicion then reply… “Oh my God! 3) ‘Have you been drinking?’ 4) ‘Do you know what the speed limit is?’ The Annual Student Toss.

As the new student season approaches all the big city universities are preparing for the influx of Freshers. 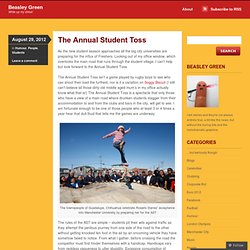 Looking out of my office window, which overlooks the main road that runs through the student village, I can’t help but look forward to the Annual Student Toss. The Annual Student Toss isn’t a game played by rugby boys to see who can shoot their load the furthest, nor is it a variation on Soggy Biscuit (I still can’t believe all those dirty old middle aged mum’s in my office actually know what that is!) The Annual Student Toss is a spectacle that only those who have a view of a main road where drunken students stagger from their accommodation to and from the clubs and bars in the city, will get to see. I am fortunate enough to be one of those people who at least 3 or 4 times a year hear that dull thud that tells me the games are underway. The townspeople of Guadalupe, Chihuahua celebrate Rosario Ibanez’ acceptance into Manchester University by preparing her for the AST Like this: Tunde.

Football Family. Football, a funny old game – of two halves – but it only takes a minute to score a goal, and at the end of the day – that’s what wins matches. 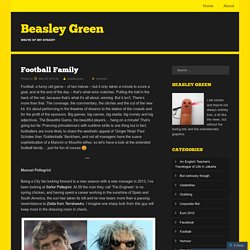 Top 10 Places You Don’t Want To Visit. Travel In previous lists we have looked at amazing holiday destinations – today we are looking at the bottom ten; these are ten places you don’t want to visit! Having said that, maybe the curious would get a thrill from visiting some of these strange and dangerous places, but for most of us, reading about it is quite enough. Feel free to mention any other contenders for the list in the comments. Great Pacific Garbage Patch Pacific Ocean The Great Pacific Garbage Patch, also described as the Pacific Trash Vortex, is a gyre of marine litter in the central North Pacific Ocean located roughly between 135° to 155°W and 35° to 42°N. Fucking up Pinterest pins so you don't have to. 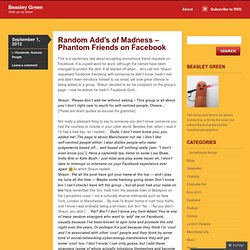 It is copied word for word, although the names have been changed to protect the idiot. It all started off when… let’s call him ‘Shaun’ requested Facebook friendship with someone he didn’t know, hadn’t met and didn’t even introduce himself to via email, yet took great offence to being added to a group. The Art of Trolling: Yahoo Answers, Chatroullette, Omegle. Zombie proof house. 2012.jpg (JPEG Image, 500x408 pixels) Extraordinary funny and clever illustrations. The Malaysian artist Chow Hon Lam has made some very funny but clever illustrations that also includes a touch of irony. 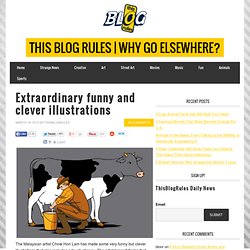 The artist himself thinks that even if you are an animal, an object or some sort of food, you have something to say even though you can’t speak. Therefore Hon Lam wants to create and tell their story to the worldWhen people confront him about it, he just say: “I guess they must have something to say … Trust me, I try to communicate with them!” In the illustrations you can see how a the milk in a cow’s body is emptying itself while milking, gingerbread men creating themselves, a golfer breaking the sky with his golfball, etc.

Others have done similar illustrations showing how the world would be if everything was different and upside down in our lives. In the visual art world, illustrators have sometimes been considered less important in comparison with fine artists and graphic designers. Trigger Happy TV Official Site. Sheldon® Comic Strip: Daily Webcomic by Dave Kellett. Rock, Paper, Smith & Wesson. Prose Before Hos 2: Screamer Prank Gone Right. Canned Unicorn Meat.