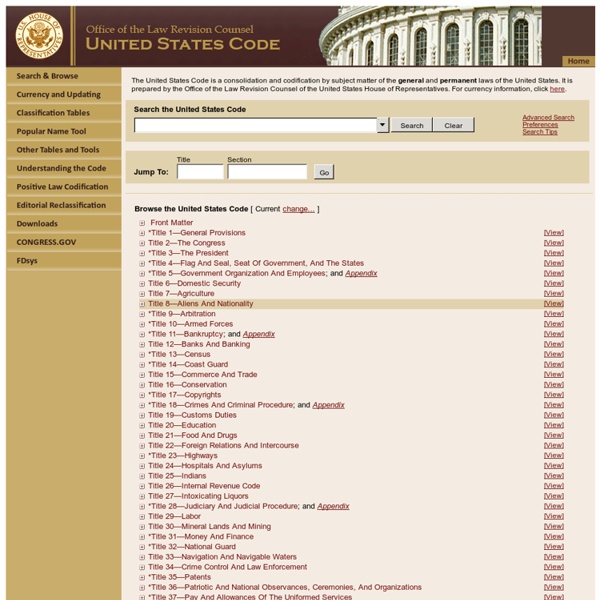 Criminal Law | Wex Legal Dictionary / Encyclopedia Overview Criminal law, as distinguished from civil law, is a system of laws concerned with punishment of individuals who commit crimes. Thus, where in a civil case two individuals dispute their rights, a criminal prosecution involves the government deciding whether to punish an individual for either an act or an omission. A “crime” is any act or omission in violation of a law prohibiting the action or omission. Criminal Codes Each state decides what conduct to designate a crime. Codification of Criminal Procedure Congress codified the federal criminal law and criminal procedure in Title 18 of the U.S. The federal government has also codified the specific procedures which must take place during the course of a criminal proceeding in the Federal Rules of Criminal Procedure. Elements of a Crime An individual commits a crime if he or she acts in a way that fulfills every element of an offense. According to the Supreme Court in Elonis v. Types of Crimes The U.S. Sentencing Guidelines Ex Post Facto

Laws and Regulations Federal Regulations Regulations are issued by federal agencies, boards, or commissions. They explain how the agency intends to carry out a law. The Rulemaking Process Federal regulations are created through a process known as rulemaking. By law, federal agencies must consult the public when creating, modifying, or deleting rules in the Code of Federal Regulations. Once an agency decides that a regulation needs to be added, changed, or deleted, it typically publishes a proposed rule in the Federal Register to ask the public for comments. After the agency considers public feedback and makes changes where appropriate, it then publishes a final rule in the Federal Register with a specific date for when the rule will become effective and enforceable. When the agency issues a final rule for comment, it must describe and respond to the public comments it received. Get Involved and Learn More State Laws and Regulations State laws generally apply just to people living in that state. Back to Top

Freedom of Speech legal definition of Freedom of Speech The right, guaranteed by the First Amendment to the U.S. Constitution, to express beliefs and ideas without unwarranted government restriction. Democracies have long grappled with the issue of the limits, if any, to place on the expression of ideas and beliefs. The dilemma dates back at least to ancient Greece, when the Athenians, who cherished individual freedom, nevertheless prosecuted Socrates for his teachings, claiming that he had corrupted young people and insulted the gods. The Framers of the Constitution guaranteed freedom of speech and expression to the citizens of the United States with the First Amendment, which reads, in part, "Congress shall make no law … abridging the freedom of speech." During the two centuries since the adoption of the First Amendment, the U.S. Public Forum Regulation When the government attempts to regulate the exercise of speech rights in traditional public forums, such as parks or public sidewalks, the U.S. The Court reaffirmed in Thomas v. The U.S.

What are Tort Laws? Tort laws are laws that offer remedies to individuals harmed by the unreasonable actions of others. Tort claims usually involve state law and are based on the legal premise that individuals are liable for the consequences of their conduct if it results in injury to others (McCarthy & Cambron-McCabe, 1992). Tort laws involve civil suits, which are actions brought to protect an individual’s private rights. Intentional Torts Intentional torts are usually offenses committed by a person who attempts or intends to do harm. Teachers accused of assault and battery are typically given considerable leeway by the courts (Alexander & Alexander, 1992). Negligence Torts The second type of tort seen most frequently in education related cases is negligence. Next Section - Previous Section Online Discussion - Back to Author Online Page

Copyright Law as a Tool for State Censorship of the Internet Maira SuttonElectronic Frontier Foundation When state officials seek to censor online speech, they're going to use the quickest and easiest method available. For many, copyright takedown notices do the trick. After years of lobbying and increasing pressure from content industries on policymakers and tech companies, sending copyright notices to take media offline is easier than ever. The copyright law that state actors most often invoke is the Digital Millennium Copyright Act (DMCA). The DMCA has become a global tool for censorship, precisely because it was designed to facilitate the removal of online media. If the DMCA is US law, how can governments around the world use it to censor speech? It's a norm that is reinforced and exported abroad by dozens of trade agreements that carry provisions that mirror, and further entrench, restrictive interpretations of the DMCA. DMCA and State Censorship Around the World: A Timeline of Case Studies

The Application of Commercial Law PURPOSE: To find out what group you are in Provides a brief summary on the differences in bodies of law by definition More definitions regarding titles, property and possession Gives an overall view on how to get back control of your universe Explains how to make the UCC-1 contract and how to properly file it Explains how to establish own private treaty with the world FINAL PRODUCT: The ability to control one’s body and one’s property Hierarchy of Law The first order of law is Natural Law. These are Universal Principals which so necessarily agrees with nature and state of man, that without observing their inherent maxims, the peace and happiness of society can never be preserved. When law began to emerge into human consciences, thought, word and deed we come to the next order of law on this planet. As a derivative of Commercial law, being removed from natural law, and therefore inferior, is Common Law (common [L co together + munis service, gift, exchange] to exchange together). 1. 1.

Copyright Frequently Asked Questions | Teaching Copyright The Congress shall have Power To… promote the Progress of Science and useful Arts, by securing for limited Times to Authors and Inventors the exclusive Right to their respective Writings and Discoveries — United States Constitution, Article 1, Section 8 What is copyright? Copyright is a form of legal protection automatically provided to the authors of “original works of authorship,” including literary, dramatic, musical, and artistic works. U.S. copyright law generally gives the author/creator or owner of an original creative work an exclusive right to: Reproduce (copy) or distribute the original work to the public (e.g., create and sell copies of a film)Create new works based upon the original work (e.g., make a movie based on a book)Perform or display the work publicly (e.g., perform a play) Violation of one of these rights is called copyright infringement. What types of works are protected by copyright? What is not protected by copyright? No, ideas are not copyrightable. It depends.

Judge Napolitano Explains the Importance of Natural Law Image credit: YouTube.com / Dallas Hills The video in this article was sent to me by a reader. Thank you Doreen for sending me the link to this video. ~ PL In this video, Judge Andrew P. Napolitano spoke to a group of people at the Mises Institutes conference in 2014 about the importance of Natural Law and why learning about our natural rights is essential for restoring our freedom. Before Judge Napolitano became a senior judicial analyst for Fox News, he went to college at Princeton University and the University of Notre Dame Law School. The information that Judge Napolitano shared to the people at the Mises Institutes conference is very important for restoring our freedom and sovereignty. If you have not downloaded or viewed the information in my second seminar The Sacred Powers of Natural Law, How to Defend Your Rights, Introduction to Ascension, I recommend doing so. The Natural Law as a Restraint Against Tyranny Judge Andrew P Napolitano Tags: freedom, judge napolitano, natural law

The Esoteric Definition of Contract Image credit: flickr.com/photos/skeletalmess/7587187482 The word “contract” comes from Old French contract and Latin contractus. Contract is a very powerful thing because it can be used to trick you to give up some of the power of your free will. It can also be used to bind you to certain terms and conditions and therefore limiting your choices and demanding you to do something to satisfy those terms and conditions. The overt definition of contract The word “contract” does not mean what you think it does. The covert definition of contract To find the covert or deeper meaning of the word “contract,” you need to look below its surface, dissect its layers, find its origins, and look at it from many different angles. One of the first steps to find the deeper meaning of the word “contract” is to separate it into two words. Nearly all contracts you sign with corporations are fraudulent When you agree to a contract, you are not only agreeing at the physical level but also at the spiritual level.

Sacramento District Regulatory Program Public Service is a Public Trust. We, as Corps Regulators, Must Earn This Trust, and to Keep This Trust, We Must Conduct Ourselves in a Manner That Reflects the Following Principles: Professional - We will conduct ourselves in a professional manner in dealings with all our customers, including applicants, violators, agencies, interest groups and the general public. Fair and Reasonable - We will be open-minded, impartial, and consistent in our interactions with all our customers to ensure all actions and decisions are free from bias and are not arbitrary or capricious. Customers will be treated equally and with tolerance. Knowledgeable - We will remain knowledgeable of applicable laws, regulations, and scientific and technical advances which affect our program. Honesty - We will be truthful, straightforward, and candid in all dealings with our customers. Accountability - We will be decisive in all actions and accept responsibility for any of our decisions and resulting consequences.

How Words Can Be Used as Magic Spells Image credit: flickr.com/photos/photophilde/4353228184 Words are not just elements of speech or writing, because they can be used to strengthen the effects of magic, which is the art of directing and controlling energy. When spoken out loud, words transform into frequencies and vibrations that can be used to direct energy. Most people will laugh at the idea of magic being real, but if only they knew what magic really is and how magic is being used to control them, they would not be laughing. The Controllers who pull the strings of politicians are well aware of how magic works. What is the definition of magic? The word magic comes from Old French magique, Latin magicus, and Greek magikos. Magic has a strong relationship with magnetic and electrical energy. The most powerful thing in the Universe is energy. The art of magic is often practiced along with certain words and sacred geometries. For strong evidence that sound can direct energy, watch the video below. The power of words

Office of the Law Revision Counsel (OLRC); This office within the U.S. House of Representatives offers several options for accessing the current and historical editions of the U.S. Code. by thecyberesq May 23