Nuremberg Laws. From Metapedia This section or article contains text from Wikipedia which has not yet been processed. 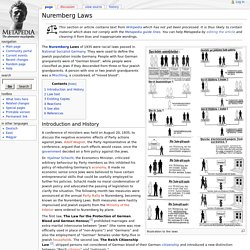 It is thus likely to contain material which does not comply with the Metapedia guide lines. You can help Metapedia by editing the article and cleaning it from bias and inappropriate wordings. Illustration to the laws The Nuremberg Laws of 1935 were racial laws passed in National Socialist Germany. Introduction and History A conference of ministers was held on August 20, 1935, to discuss the negative economic effects of Party actions against Jews. Dr. The first law, The Law for the Protection of German Blood and German Honour,[1] prohibited marriages and extra-marital intercourse between “Jews” (the name was now officially used in place of “non-Aryans”) and “Germans” and also the employment of “German” females under forty-five in Jewish households. Who Killed Jesus? A history of the belief that the Jews killed Jesus. 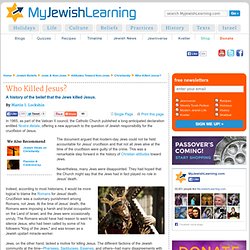 In 1965, as part of the Vatican II council, the Catholic Church published a long-anticipated declaration entitled Nostra Aetate, offering a new approach to the question of Jewish responsibility for the crucifixion of Jesus. We Also Recommend The document argued that modern-day Jews could not be held accountable for Jesus' crucifixion and that not all Jews alive at the time of the crucifixion were guilty of the crime. This was a remarkable step forward in the history of Christian attitudes toward Jews.

Nevertheless, many Jews were disappointed. Indeed, according to most historians, it would be more logical to blame the Romans for Jesus' death. Jews, on the other hand, lacked a motive for killing Jesus. The Nuremberg Race Laws. At the annual party rally held in Nuremberg in 1935, the Nazis announced new laws which institutionalized many of the racial theories prevalent in Nazi ideology. 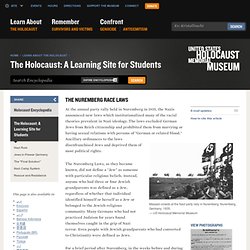 The laws excluded German Jews from Reich citizenship and prohibited them from marrying or having sexual relations with persons of "German or related blood. " Ancillary ordinances to the laws disenfranchised Jews and deprived them of most political rights. The Nuremberg Laws, as they became known, did not define a "Jew" as someone with particular religious beliefs. Instead, anyone who had three or four Jewish grandparents was defined as a Jew, regardless of whether that individual identified himself or herself as a Jew or belonged to the Jewish religious community. Many Germans who had not practiced Judaism for years found themselves caught in the grip of Nazi terror. 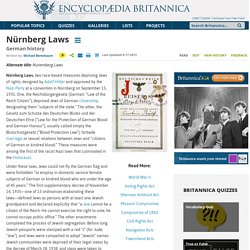 You can also highlight a section and use the tools in this bar to modify existing content: We welcome suggested improvements to any of our articles. You can make it easier for us to review and, hopefully, publish your contribution by keeping a few points in mind: Encyclopaedia Britannica articles are written in a neutral, objective tone for a general audience. You may find it helpful to search within the site to see how similar or related subjects are covered. Any text you add should be original, not copied from other sources. The Nuremberg Race Laws: The First Step in the Suppression of Jews in Europe (State History Day) The Holocaust Nuremberg Race Laws. Introduction: Nuremberg Race Laws | Kristallnacht | GhettosConcentration Camps: Dachau | Bergen-Belsen | AuschwitzRighteous Among the Nations: Gies | Schindler | Winton | Grueninger Primary Source and Analysis Tools | Library of Congress Resources Primary Source Sets | PDF Version. 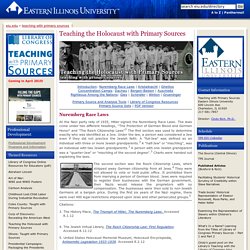 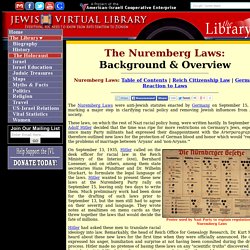 These laws, on which the rest of Nazi racial policy hung, were written hastily. In September 1935, Adolf Hitler decided that the time was ripe for more restrictions on Germany's Jews, especially since many Party militants had expressed their disappointment with the Arierparagraph. He therefore outlined new laws for the protection of German blood and honor which would "regulate the problems of marriage between 'Aryans' and 'non-Aryans.'" On September 13, 1935, Hitler called on the desk officer for racial law in the Reich Ministry of the Interior (RMI), Bernhard Loesener, and on others, among them state secretaries Hans Pfundtner and Dr.

Wilhelm Stuckart, to formulate the legal language of the laws. Hitler had asked these men to translate racial ideology into law. The Nuremberg Laws. Winter 2010, Vol. 42, No. 4 The Nuremberg Laws Archives Receives Original Nazi Documents That "Legalized" Persecution of Jews By Greg Bradsher Larger Version Law for the Safeguard of German Blood and German Honor barred marriage between Jews and other Germans. 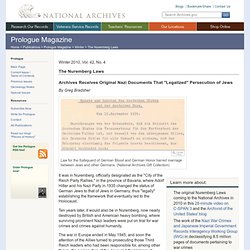 It was in Nuremberg, officially designated as the "City of the Reich Party Rallies," in the province of Bavaria, where Adolf Hitler and his Nazi Party in 1935 changed the status of German Jews to that of Jews in Germany, thus "legally" establishing the framework that eventually led to the Holocaust. Ten years later, it would also be in Nuremberg, now nearly destroyed by British and American heavy bombing, where surviving prominent Nazi leaders were put on trial for war crimes and crimes against humanity.