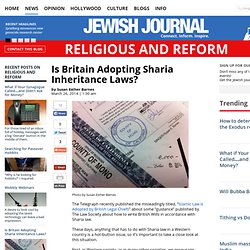 These days, anything that has to do with Sharia law in a Western country is a hot-button issue, so it’s important to take a close look at this situation. First, in Western society, as in many other societies, we encourage people to write a Last Will and Testament, a legal document that tells our survivors what we want done with our possessions after we die. Every country, and every State in the US, has laws and regulations regarding how Wills should be written and carried out. Unfortunately, many people, for various reasons, don’t get around to signing a Will before they die. This is still a Christian culture: but the Law Society is now encouraging Sharia principles that are deeply hostile to our values. British law society’s move to allow Islamic ‘Sharia compliant’ wills called ‘deeply disturbing’

LONDON — Islamic law is to be effectively enshrined in the British legal system for the first time under guidelines for lawyers on drawing up “Sharia compliant” wills. 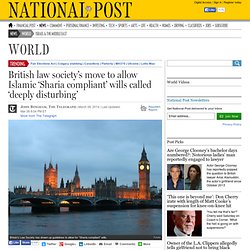 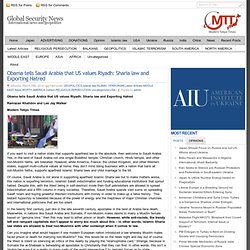 Yes, in the land of Saudi Arabia not one single Buddhist temple, Christian church, Hindu temple, and other non-Muslim faiths, are tolerated. However, while America, France, the United Kingdom, and other Western states, support multi-cultural values at home; they don’t mind doing business with a nation that bans all non-Muslim faiths, supports apartheid Islamic Sharia laws and child marriage to the tilt. Of course, Saudi Arabia is not alone in supporting apartheid Islamic Sharia law but to make matters worse, this nation is exporting terrorism, Islamist Salafi indoctrination and funding educational institutions that sprout hatred. In the twenty first century, just like in the late seventh century, apostates in the land of Arabia face death. Brunei to introduce death by stoning, flogging under new Sharia law. The Sultan of Brunei Getty Images Brunei is pushing to introduce Sharia law with punishments that include flogging, the dismemberment of limbs and stoning to death. 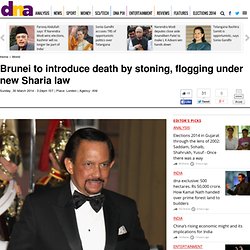 The Sultan of Brunei will be overseeing his country's transition to a system of Islamic law. The 67-year-old absolute monarch, who is one of the world's wealthiest rulers and a close ally of Britain, declared last year that he wanted to introduce a full Sharia system in his country. He had also warned critics, who took to social media sites to complain, that they could be prosecuted using the new laws, the Independent reports. Sharia law adopted by UK - Brandon, Manitoba Discussion. BREAKING: UK is starting to implement Sharia, and Islamic Law!!! Sharia law at work!! - Businesswoman visiting Dubai sentenced to jail for reporting own rape : TPO_Hisself.

Brunei Darussalam to bring in Sharia Law. Bandar Seri Begawan: The Sultan of Brunei, one of the world’s wealthiest rulers, will this week oversee his country’s transition to Sharia law. 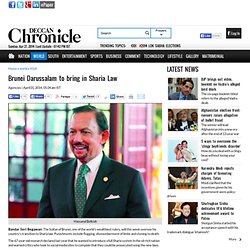 Punishments include flogging, dismemberment of limbs and stoning to death. The 67-year-old monarch declared last year that he wanted to introduce a full Sharia system in the oil-rich nation and warned critics who took to social media sites to complain that they could be prosecuted using the new laws. The decision to introduce Sharia and reintroduce the death penalty has been condemned by NGOs and legal rights campaigners, who say the new rules will breach international laws. It has also triggered alarm among some of Brunei’s non-Muslim communities, who will also be subject to some of the rulings. Pakistan lawmakers move to close sharia advisory body ucanews. 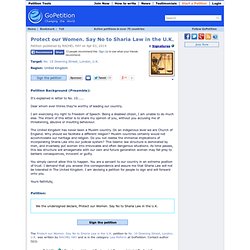 Petition Background (Preamble): It's explained in letter to No. 10...... Dear whom ever thinks they’re worthy of leading our country. Hamas to Institute Sharia Punishments in Gaza. Thieves will have their hands amputated and lashes will be given for minor infractions as well as serious criminal offenses. 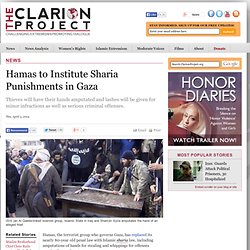 Hamas, the terrorist group who governs Gaza, has replaced its nearly 80-year old penal law with Islamic sharia law, including amputations of hands for stealing and whippings for offenses ranging from minor to more severe. Speaking to the Gulf News from the United Arab Emirates-based Gulf News, a senior Hamas official said the new law were being instituted because the old laws, dating from the British Mandate, were "impractical" and said that the new laws would stop the spread of crime. Under the new “sharia-inspired” law, minor infractions would incur the punishment of 20 lashes, while more severe criminal convictions would garner 80 lashes for the offender.

The changes were not looked upon favorably by all the terrorist groups operating out of Gaza. Preserve British Law for Britain - Not integrate Sharia Law. It has been reported in the Mail On-Line Monday March 31st and Telegraph that Sharia Law is to be enshrined into British Law. 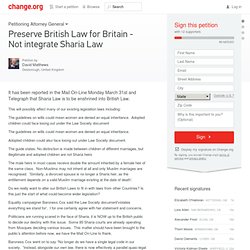 This will possibly affect many of our existing legislation laws including: The guidelines on wills could mean women are denied an equal inheritance. Trending Newsroom: AHMEDNASIR ABDULLAHI wants Islamic SHARIA LAW introduced in Kenya to address issues of MUSLIMS. Sharia Law says it’s okay to ‘beat’ your wife ‘lightly’ Written By : Tiffiny RuegnerApril 2, 2014. 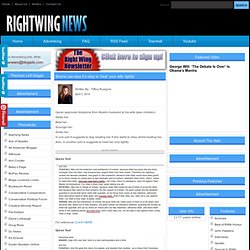 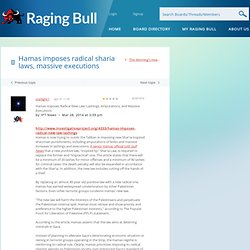 A senior Hamas official told Gulf News that a new punitive law, "inspired by" Shar'ia Law, is required to replace the former and "impractical" one. The article states that there will be a minimum of 20 lashes for minor offenses and a minimum of 80 lashes for criminal cases: the death penalty will also be expanded in accordance with the Shar'ia. Sharia & constitution. THIS refers to Babar Sattar’s article ‘Our Sharia enforcers’ (Feb 10). The writer says that while our constitution mandates that none of our laws must breach Islamic injunctions, it doesn’t require the state to enforce Sharia. He goes on to say that each individual has the right not to be dictated by others on how to practise his faith. Were it not for the purposes of ‘enforcing’ Sharia, I fail to understand the purpose of ensuring that our laws are ‘Sharia compliant’? UK: Our New Sharia Law by Douglas Murray. The question of what constitutes “voluntary” remains.

Discrimination Fear: Sharia law guidelines introduced to UK Muslim wills. Sharia Law Is Widely Supported In Egypt? - Find Answers to this Question. Hamas Imposes Sharia Law in Gaza. Sharia Law. Bob Beauprez Says Sharia Law is "Creeping In" Here in Colorado. Tunisia's new constitution called inconsistent. The exhaustion is plain to see on the faces of Tunisian parliamentarians. "It's like giving birth: painful, but in the end everyone is happy when the child arrives," said Mehrezia Laabidi, a member of Tunisia's Islamist political party Ennahda.

As deputy chair of Tunisia's constituent assembly, she headed numerous plenary sessions over a period of several weeks, often having to raise her voice to restore order when the debate became too heated among the approximately 200 members. The National Assembly is due to vote on the proposed constitution on Sunday, January 26, after the original vote, scheduled for Saturday, was postponed.

There is no denying that Tunisia's new constitution has had a very tumultuous birth, marked by bitter debates about religion, women's rights and the independence of the judiciary. But in the end, the conservative and liberal sides have managed to reconcile their differences, partly thanks to the conservative majority giving in on some issues. Blame makeup: Molestations in public are 'women’s own fault', Saudi poll shows.

'No shariah': Topless FEMEN activists protest Swedish mosque. Three female activists from the Ukrainian-based feminism group FEMEN stripped in a Swedish mosque on Saturday to protest Islamic law in Egypt, revealing painted messages on their bodies, like “No shariah in Egypt and the world” and “My body is mine, not somebody’s honor.” Employees of the central Stockholm mosque called police, who arrested the women on suspicion of disorderly conduct, The Local reported. SEE ALSO: Kuwaiti cleric says Koran allows for wife beatings to treat ‘mental disorder’ The women told media they appreciated living in a country where being arrested would be their worst punishment. Fox News: YMCA swim class for Muslim girls proves Sharia law is ‘changing everything’ In Gaza, Teen Lifestyle Gets Cramped by Hamas.

Turkish Airlines bans blonde hostesses (Includes interview and first-hand account) Istanbul - You might have heard that Turkish Airlines banned alchohol and red lipstick, but did you know that they also prohibited their flight attendants from having blonde hair? Turkish Airlines, which promotes itself as Europe's best airline, has recently taken steps that do not encourage western style or free expression. After a controversial decision to ban alcoholic drinks on most flights, the airline banned flight attendants from wearing red lipstick or red fingernail polish.

Then they prohibited them from having blonde hair. The airline, which is half private and half government-controlled, is now reflecting Turkish Prime Minister Erdogan's Islamist ideals by dictating that passengers must avoid alcohol, and flight attendants must dress in a conservative manner. The Turkish people are growing increasingly angry about such strict controls in their society--which go against the secular democratic ideals of Mustafa Kemal Ataturk, the founder of the Turkish Republic.

Erdogan faces growing criticism. The unrest in Turkey has continued for nearly a week. But it's no longer about saving trees in an Istanbul city park; it's about basic democratic abuses in the country. Most demonstrators are demanding Prime Minister Recep Tayyip Erdogan's resignation. The government leader has been in office for a decade. His conservative, Islamic party AKP won national elections twice in a row and with a clear margin. For years, Erdogan enjoyed strong support, and the country appeared to be doing well.

Wave of unrest The wave of unrest currently rolling over the country has reached a height that Erdogan has yet to experience. Many Turks are upset with Erdogan's authoritarian style of governing The protestors' slogans clearly indicate that the problem is Erdogan, not his party or the government, according to Aktar. Turkey's growing wave of protests. Turkish protestors issue demands, pepper spray in Ankara. Turkish airline workers join demonstrations, don Guy Fawkes masks. Turkish Media Slammed For Ignoring Massive Protests. Turkey: Calls To End Police Violence At Protests Eurasia Review. Turkey: End Police Violence at Protests. (Istanbul) – Prime Minister Recep Tayyip Erdoğan’s government should end police violence and excessive use of force against protests across Turkey . Officials should uphold the right to peaceful protest and free speech.

Istanbul protesters vow to continue demonstrations. Solidarity with Istanbul protesters grows in Turkey and abroad. Amid violent clashes between rioters and the police, solidarity rallies are being staged all across Turkey. The protests are increasingly targeted directly at Prime Minister Erdogan’s government. A peaceful protest camp in "Gezi Park" in the center of Istanbul marked the beginning of this week's demonstrations. On Thursday night (30.05.2013), Turkish police units started attacking the camping protesters. Since then, the demonstrations have turned into nation-wide rallies against the policies of Prime Minister Recep Tayyip Erdogan, who has been in office for ten years.

More and more protesters' slogans are directly calling for the government's resignation. Preliminary injunction against construction The protest was initially targeted at the Turkish government's plans to redesign "Gezi Park". Prime Minister Erdogan says he will press ahead with the shopping mall. Despite the protest, Prime Minister Erdogan said the planned construction was a done deal. Pressure from social media. Opinion: Erdogan's miscalculation. Turkish demonstrator: The park is just a symbol. Erdogan rejects ‘dictator’ claims, says Twitter is a ‘menace’ Turkey protests spread to streets of north Cyprus. Turkey: Taksim Is Not (Yet) Tahrir. Turkey protests put Erdogan’s power to the test - HAARETZ.