Scroll.in - News. Politics. Culture. You might not have realised it, but a case on which the Supreme Court is due to deliver its verdict on Tuesday could alter the way the internet works in India. 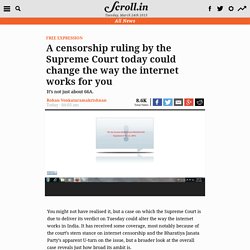 It has received some coverage, most notably because of the court’s stern stance on internet censorship and the Bharatiya Janata Party’s apparent U-turn on the issue, but a broader look at the overall case reveals just how broad its ambit is. Scroll.in - News. Politics. Culture. Modi government lost a political opportunity by leaving 66A to the Supreme Court By leaving it to the judiciary to make a decision, the prime minister demonstrated that he had become a Lutyens insider. 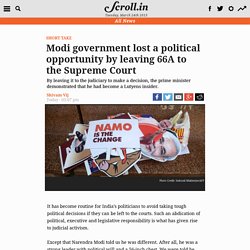 It has become routine for India’s politicians to avoid taking tough political decisions if they can be left to the courts. Such an abdication of political, executive and legislative responsibility is what has given rise to judicial activism. Except that Narendra Modi told us he was different. After all, he was a strong leader with political will and a 56-inch chest. He blackened his Twitter profile to protest against UPA2-era internet censorship and promised us good days. Alas, Modi became a Lutyens' insider. No more 66A! — In a landmark decision, the Supreme Court has struck down Section 66A. 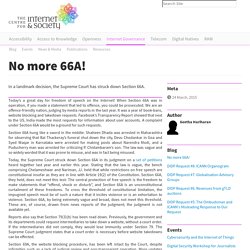 Today’s a great day for freedom of speech on the Internet! When Section 66A was in operation, if you made a statement that led to offence, you could be prosecuted. We are an offence-friendly nation, judging by media reports in the last year. It was a year of book-bans, website blocking and takedown requests. Explained: Article 66A. The Supreme Court is examining the constitutional validity of Section 66A of the amended Indian Information Technology Act, 2000. 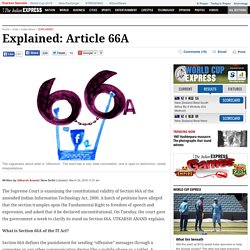 A batch of petitions have alleged that the section tramples upon the Fundamental Right to freedom of speech and expression, and asked that it be declared unconstitutional. SC quashes Section 66A of IT Act: Key points of court verdict- The Times of India. The Supreme Court on Tuesday quashed Section 66A of the Information Technology Act, which provides the government power to arrest a person for posting allegedly "offensive" content on websites. 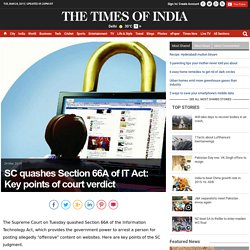 Here are key points of the SC judgment. Cops 'misuse' Section 66A This section had been widely misused by police in various states to arrest innocent persons for posting critical comments about social and political issues and political leaders on social networking sites. What is Section 66A. Frequently Asked Questions about Copyright (continued) Cyber Pornography in India – Sprouting of a Hydra’s head. Social Networking Sites–What are Legal Risks to Organisation’s ? Court Orders Damages in Software Piracy Case. Facts Court Proceedings Decision Comment The recent decision of the Delhi High Court in Microsoft Corporation v Yogesh Papat, which involved software piracy, has confirmed the Indian judiciary's resolve to tackle IP matters. 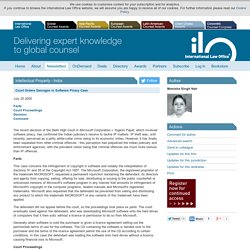 IP theft was, until recently, perceived as a petty white-collar crime owing to its economic milieu. Microsoft Files Copyright Infringement Case Against KK Software. Microsoft Files Copyright Infringement Case Against KK Software CRN, Jan 18, 2013 The company has claimed damages of Rs 5.71 crore; Delhi High Court has directed KK Jha and other defendants to disclose details of their assets Microsoft has filed a copyright case against Kamlesh Kumar Jha, the owner of New Delhi-based KK Software Solutions, and other defendants for allegedly indulging in software piracy and counterfeiting Microsoft products, in the Delhi High Court for permanent injunction and damages. 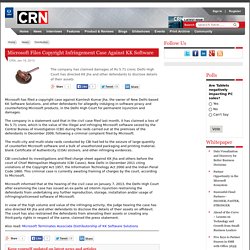 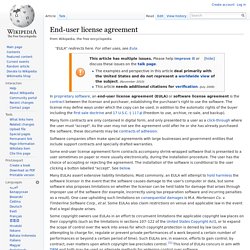 The license may define ways under which the copy can be used, in addition to the automatic rights of the buyer including the first sale doctrine and 17 U.S.C. § 117 (freedom to use, archive, re-sale, and backup). Many form contracts are only contained in digital form, and only presented to a user as a click-through where the user must "accept". As the user may not see the agreement until after he or she has already purchased the software, these documents may be contracts of adhesion. Software companies often make special agreements with large businesses and government entities that include support contracts and specially drafted warranties. Many EULAs assert extensive liability limitations. Almost All Torrents and File Sharing sites banned in India - Cyber Kendra - Latest Hacking News And Tech News. This is not the good news for the Indian users that Indian Government have banned almost all the file sharing and torrents site last day. 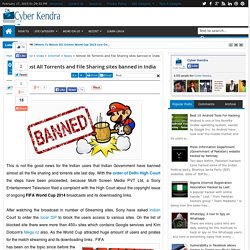 With the order of Delhi High Court the steps have been proceeded, because Multi Screen Media PVT Ltd, a Sony Entertainment Television filed a complaint with the High Court about the copyright issue of ongoing FIFA World Cup 2014 broadcasts and its downloading links. After watching the broadcast in number of Streaming sites, Sony have asked Indian Court to order the local ISP to block the users access to various sites. On the list of blocked site there were more than 450+ sites which contains Google services and Kim Dotcom's Mega.nz also. As the World Cup attracted huge amount of users and pirates for the match streaming and its downloading links . Copyright infringement. "Illegal Music" redirects here. 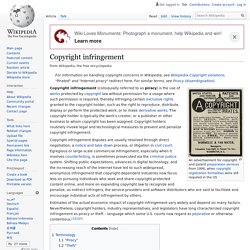 For the record label, see Illegal Musik. Copyright infringement is the use of works protected by copyright law without permission, infringing certain exclusive rights granted to the copyright holder, such as the right to reproduce, distribute, display or perform the protected work, or to make derivative works. Adobe Systems v. Stargate Software.

Citation Edit Adobe Sys., Inc. v. Digital Millennium Copyright Act. The Digital Millennium Copyright Act (DMCA) is a United States copyright law that implements two 1996 treaties of the World Intellectual Property Organization (WIPO). It criminalizes production and dissemination of technology, devices, or services intended to circumvent measures (commonly known as digital rights management or DRM) that control access to copyrighted works. It also criminalizes the act of circumventing an access control, whether or not there is actual infringement of copyright itself. Adobe v. One Stop Micro. Citation. Software Licensing Agreement. Software Licensing Agreements in India- General Overview Allowing an individual or group to use a piece of software is Software licensing[2].

Nearly all applications are licensed rather than sold. End-user license agreement. Shrink wrap contract. Shrink wrap contracts are license agreements or other terms and conditions of a (putatively) contractual nature which can be read and accepted by the consumer only after the consumer opens the product. The term refers to the shrinkwrap plastic wrapping used to coat software boxes, because such packaging makes it impossible for the buyer to have read the contract before completing the purchase. These contracts are not, however, limited to the software industry. Web-wrap, click-wrap and browse-wrap are related terms which refer to license agreements in software which is downloaded or used over the internet. The Microsoft way. Wherein an Indian firm using pirated Microsoft software here is sued in the US by California state for using unfair trade advantage. The role played by Microsoft in getting California to sue Indian textile manufacturers for unfair competition: Is it losing faith in the Delhi High Court?