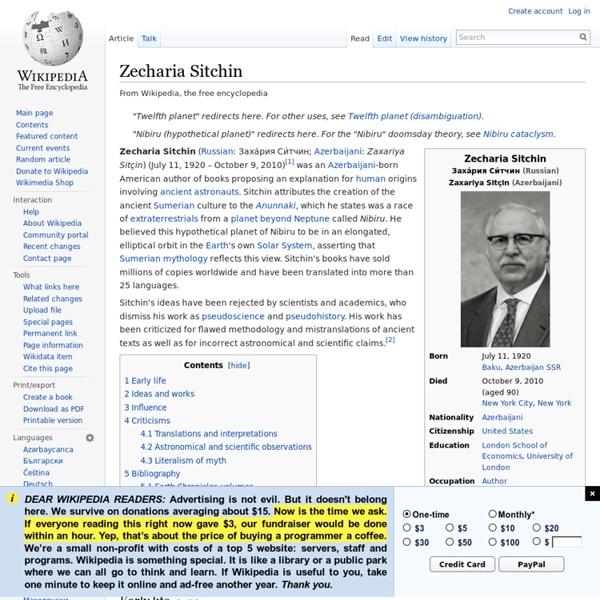 "Nibiru (hypothetical planet)" redirects here. For the "Nibiru" doomsday theory, see Nibiru cataclysm. Zecharia Sitchin (Russian: Заха́рия Си́тчин; Azerbaijani: Zaxariya Sitçin) (July 11, 1920 – October 9, 2010)[1] was an Azerbaijani-born American author of books proposing an explanation for human origins involving ancient astronauts. Sitchin attributes the creation of the ancient Sumerian culture to the Anunnaki, which he states was a race of extraterrestrials from a planet beyond Neptune called Nibiru. He believed this hypothetical planet of Nibiru to be in an elongated, elliptical orbit in the Earth's own Solar System, asserting that Sumerian mythology reflects this view. Sitchin's ideas have been rejected by scientists and academics, who dismiss his work as pseudoscience and pseudohistory. Early life[edit] Sitchin was born in the Azerbaijan SSR, but was raised in Mandatory Palestine. Ideas and works[edit] Influence[edit] Criticisms[edit] Translations and interpretations[edit] Related:  Knowledge of the Ancient

The Allies of Humanity | The Allies of Humanity is being presented to prepare people for a whole new reality that is largely hidden and unrecognized in the world today. It provides a new perspective that empowers people to face the greatest challenge and opportunity that we, as a race, have ever encountered. The Allies Briefings contain a number of critical if not alarming statements about the growing extraterrestrial intervention and integration into the human race and about the extraterrestrial activities and hidden agenda. The purpose of the Allies Briefings is not to provide hard evidence about the reality of the ET visitation to our world, which is already well documented in many other fine books and research journals on the subject. The purpose of the Allies Briefings is to address the dramatic and far-reaching implications of this phenomenon, to challenge our human tendencies and assumptions regarding it and to alert the human family to the great threshold we now face. —The Society for the New Message

New Atlantis New Atlantis is a utopian novel by Sir Francis Bacon, published in Latin (as Nova Atlantis) in 1624 and in English in 1627. In this work, Bacon portrayed a vision of the future of human discovery and knowledge, expressing his aspirations and ideals for humankind. The novel depicts the creation of a utopian land where "generosity and enlightenment, dignity and splendour, piety and public spirit" are the commonly held qualities of the inhabitants of the mythical Bensalem. The plan and organisation of his ideal college, Salomon's House (or Solomon's House), envisioned the modern research university in both applied and pure sciences. Plot summary[edit] The novel depicts a mythical island, Bensalem, which is discovered by the crew of a European ship after they are lost in the Pacific Ocean somewhere west of Peru. But hear me now, and I will tell you what I know. He portrayed a vision of the future of human discovery and knowledge. Interpretations[edit] Who Rules Bensalem? Prayers[edit]

György Lukács As a literary critic Lukács was especially influential, because of his theoretical developments of realism and of the novel as a literary genre. In 1919, he was the Hungarian Minister of Culture of the government of the short-lived Hungarian Soviet Republic (March–August 1919).[1] Lukács has been described as the preeminent Marxist intellectual of the Stalinist era, though assessing his legacy can be difficult as Lukács seemed to both support Stalinism as the embodiment of Marxist thought, and yet also champion a return to pre-Stalinist Marxism.[2] Life and politics[edit] Georg Lukács was born Löwinger György Bernát, in Budapest, Hungary, to the investment banker József Löwinger (later Szegedi Lukács József; 1855–1928) and his wife Adele Wertheimer (Wertheimer Adél; 1860–1917), who were a wealthy Jewish family. He had a brother and sister. Pre–Marxist period[edit] Communist leader[edit] Lukács in 1919 After the Hungarian Soviet Republic was defeated, Lukács fled from Hungary to Vienna.

Shroud of Turin: Could Ancient Earthquake Explain Face of Jesus? The authenticity of the Shroud of Turin has been in question for centuries and scientific investigations over the last few decades have only seemed to muddle the debate. Is the revered cloth a miracle or an elaborate hoax? Now, a study claims neutron emissions from an ancient earthquake that rocked Jerusalem could have created the iconic image, as well as messed up the radiocarbon levels that later suggested the shroud was a medieval forgery. But other scientists say this newly proposed premise leaves some major questions unanswered. The Shroud of Turin, which bears a faint image of a man's face and torso, is said to be the fabric that covered Jesus' body after his crucifixion in A.D. 33. Though the Catholic Church doesn't have an official position on the cloth, the relic is visited by tens of thousands of worshippers at the Turin Cathedral in Italy each year. Carbon and quakes Shaky science? "If you want to believe in the Shroud of Turin, you believe in it," Cook said.

Voynich manuscript The Voynich manuscript is an illustrated codex hand-written in an unknown writing system. The vellum on which it is written has been carbon-dated to the early 15th century (1404–1438), and may have been composed in Northern Italy during the Italian Renaissance.[1][2] The manuscript is named after Wilfrid Voynich, a Polish book dealer who purchased it in 1912.[3] Some of the pages are missing, but about 240 remain. The Voynich manuscript has been studied by many professional and amateur cryptographers, including American and British codebreakers from both World War I and World War II.[4] No one has yet succeeded in deciphering the text, and it has become a famous case in the history of cryptography. The Voynich manuscript was donated by Hans P. Description[edit] Codicology[edit] The manuscript measures 23.5 by 16.2 by 5 centimetres (9.3 by 6.4 by 2.0 in), with hundreds of vellum pages collected into eighteen quires. Text[edit] A page showing characteristics of the text Illustrations[edit]

Jürgen Habermas Biography[edit] Habermas was born in Düsseldorf, Rhine Province, in 1929. He was born with a cleft palate and had corrective surgery twice during childhood.[4] Habermas argues that his speech disability made him think differently about the importance of communication and prefer writing over the spoken word as a medium.[5] From 1956 on, he studied philosophy and sociology under the critical theorists Max Horkheimer and Theodor Adorno at the Goethe University Frankfurt's Institute for Social Research, but because of a rift between the two over his dissertation—Horkheimer had made unacceptable demands for revision—as well as his own belief that the Frankfurt School had become paralyzed with political skepticism and disdain for modern culture[6]—he finished his habilitation in political science at the University of Marburg under the Marxist Wolfgang Abendroth. Habermas then returned to his chair at Frankfurt and the directorship of the Institute for Social Research. Teacher and mentor[edit]

Controversial Ancient Book Of Veles Remains An Unexplained Mystery MessageToEagle.com – The Book of Veles is so controversial that it has been banned in Russia. This old document contains evidence of Genesis, evolution and migration of Slavs. Scientists who studied the book are perplexed and its validity has been questioned many times. Yet, no conclusive evidence has been presented that could shed more light on the controversy surrounding this mysterious book. Book of Veles The Book of Veles was discovered in the beginning of the 20th century in Ukraine, by Russian colonel Isenbeck, in an old, devastated castle. After deciphering the 45 42 planks made of birch wood it turned out that the book comprised history of Slavs since 7th century BC until 9th century AD. According to Meet the Slavs “surface of the planks were scrubbed before carving the letters and afterward painted with some dark matter, which faded over time. The Book of Veles describes how pre-Slavic tribes lived in the “land of seven rivers beyond the sea”. Veles statue in Ukraine References:

Codex Seraphinianus Codex Seraphinianus, originally published in 1981, is an illustrated encyclopedia of an imaginary world, created by the Italian artist, architect, and industrial designer Luigi Serafini during thirty months, from 1976 to 1978.[1] The book is approximately 360 pages long (depending on edition), and written in a strange, generally unintelligible alphabet. Originally published in Italy, the book has since been released in several countries.[2] The Latin noun codex referred to a book with pages (as opposed to a scroll), and is often applied in modern usage to a manuscript with pages, especially an antiquarian one.[3] Seraphinianus is a Latinisation of the author's surname, Serafini (which in Italian, refers to the seraphs). The title Codex Seraphinianus may thus be understood as "the book (or manuscript) of Serafini".[4] Description[edit] Writing system[edit] The language of the book has defied complete analysis by linguists for decades. Contents[edit] Editions[edit] Cover of Abbeville edition

EpistemeLinks: Philosophy Resources on the Internet

Related:
Related:  Knowledge of the Ancient