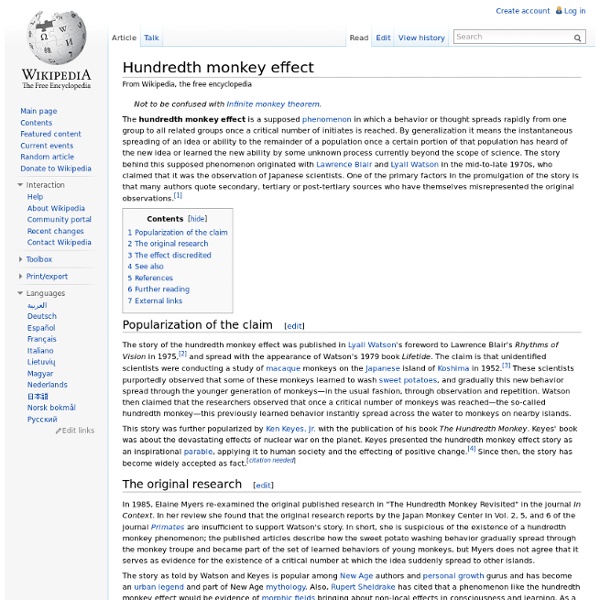 The hundredth monkey effect is a studied phenomenon[1] in which a new behavior or idea is claimed to spread rapidly by unexplained, even supernatural, means from one group to all related groups once a critical number of members of one group exhibit the new behavior or acknowledge the new idea. The theory behind this phenomenon originated with Lawrence Blair and Lyall Watson in the mid-to-late 1970s, who claimed that it was the observation of Japanese scientists. One of the primary factors in the promulgation of the story is that many authors quote secondary, tertiary or post-tertiary sources who have themselves misrepresented the original observations.[1] Popularisation of the effect[edit] The story of the hundredth monkey effect was published in Lyall Watson's foreword to Lawrence Blair's Rhythms of Vision in 1975,[2] and spread with the appearance of Watson's 1979 book Lifetide. This story was further popularised by Ken Keyes, Jr. with the publication of his book The Hundredth Monkey.

Jackalope A mock-up of a stuffed Jackalope in a restaurant near Death Valley The jackalope is a mythical animal of North American folklore (a so-called "fearsome critter") described as a jackrabbit with antelope horns or deer antlers and sometimes a pheasant's tail (and often hind legs). The word "jackalope" is a portmanteau of "jackrabbit" and "antelope". A group of jackalopes is called a flaggerdoot.[1] Myth[edit] Plate XLVII of Animalia Qvadrvpedia et Reptilia (Terra) by Joris Hoefnagel, circa 1575, showing a "horned hare" The jackalope has led to many outlandish (and largely tongue-in-cheek) claims as to the creature's habits. The New York Times attributes the story's origin to a 1932 hunting outing involving Douglas Herrick (1920–2003) of Douglas, Wyoming. Mythological references to a horned rabbit creature can be found in the Huichol legends. Official recognition[edit] In 2005, the state legislature of Wyoming considered a bill to make the jackalope the state's official mythological creature.

THRIVE: What on Earth Will It Take? From the authors: THRIVE is an unconventional documentary that lifts the veil on what's "really" going on in our world by following the money upstream - uncovering the global consolidation of power in nearly every aspect of our lives. Weaving together breakthroughs in science, consciousness and activism, THRIVE offers real solutions, empowering us with unprecedented and bold strategies for reclaiming our lives and our future. From the Odyssey Magazine: THRIVE is more than a documentary relevant to the times. It is more than a well-researched and alarming insight into who really controls how the world works. It is a recipe and blueprint for how we can, each and every one of us, thrive in the way that the rest of nature does – easily, naturally and with expansive grace. For this last point alone, it is more than worth the time to see. Watch the full documentary now

Peter Fenwick (neuropsychologist) Peter Brooke Cadogan Fenwick (born 25 May 1935) is a neuropsychiatrist and neurophysiologist who is known for his studies of epilepsy and end-of-life phenomena. Fenwick is a graduate of Trinity College, Cambridge,[1] where he studied Natural Science. He obtained his clinical experience at St Thomas' Hospital.[2] Fenwick is a senior lecturer at King's College, London, where he works as a consultant at the Institute of Psychiatry.[3][4][5] He is the Consultant Neuropsychologist at both the Maudsley,[6] and John Radcliffe hospitals, and also provides services for Broadmoor Hospital.[7] He works with the Mental Health Group at the University of Southampton, and holds a visiting professorship at the Riken Neurosciences Institute in Japan.[5][8] Fenwick is the president of the Horizon Research Foundation,[9] an organisation that supports research into end-of-life experiences. "The plain fact is that none of us understands these phenomena. ^ Jump up to: a b "Profile at The London Sleep Centre".

Fur-bearing trout A mounted "fur-bearing trout" The fur-bearing trout (or furry trout) is a fictional creature native to the northern regions of North America, particularly Canada, Montana, Wyoming, Colorado, and the Great Lakes. The basic claim (or tall tale) is that the waters of lakes and rivers in the area are so cold that a species of trout has evolved which grows a thick coat of fur to maintain its body heat. Another theory says that it is due to four jugs of hair tonic being spilled into the Arkansas River[citation needed]. In reality, a possible source may have been a simple misunderstanding. A 17th-century Scottish immigrant's letter to his relatives referring "furried animals and fish" being plentiful in the New World, followed by a request to procure a specimen of these "furried fish" to which the mischievous Scotsman readily complied by making one up, is often cited. The hoax can be unequivocally documented to go back to at least the 1930s. See also[edit] External links[edit]

Mammon Etymology[edit] Scholars do not agree about its etymology,[1] but it is theorized that Mammon derives from Late Latin mammon, from Greek "μαμμωνάς", Syriac mámóna ("riches"),[2] Aramaic mamon ("riches, money"),[1][3] a loanword from Mishnaic Hebrew 'ממון (mmôn) meaning money,[4][5][6] wealth,[7] or possessions;[8] although it may also have meant "that in which one trusts".[1] The Greek word for "Mammon", μαμμωνάς, occurs in the Sermon on the Mount (during the discourse on ostentation) and in the parable of the Unjust Steward (Luke 16:9–13). The Authorised Version keeps the Syriac word; John Wycliffe uses richessis. Christians began to use the name of Mammon as a pejorative, a term that was used to describe gluttony and unjust worldly gain in Biblical literature. It was personified as a false god in the New Testament. The Revised Standard Version (RSV) of the Bible explains "mammon is a Semitic word for money or riches Personifications[edit] In various countries[edit] In popular culture[edit]

Ken Wilber Kenneth Earl "Ken" Wilber II (born January 31, 1949, in Oklahoma City, Oklahoma) is an American writer and public speaker. He has written and lectured about mysticism, philosophy, ecology, and developmental psychology. His work formulates what he calls Integral Theory.[1] In 1998 he founded the Integral Institute.[2] Biography[edit] Wilber was born in 1949 in Oklahoma City. In 1973 Wilber completed his first book, The Spectrum of Consciousness,[5] in which he sought to integrate knowledge from disparate fields. In 1982 New Science Library published his anthology The Holographic Paradigm and other Paradoxes[6] a collection of essays and interviews, including one by David Bohm. In 1983 Wilber married Terry "Treya" Killam who was shortly thereafter diagnosed with breast cancer. Subsequently, Wilber wrote Sex, Ecology, Spirituality (SES), (1995), the first volume of his Kosmos Trilogy. Theory[edit] Holons[edit] Quadrants[edit] AQAL: "All Quadrants All Levels"[edit] Levels or stages[edit]

Fiji mermaid P.T. Barnum's Feejee mermaid from 1842 The Fiji mermaid (also Feejee mermaid) was an object comprising the torso and head of a juvenile monkey sewn to the back half of a fish. It was a common feature of sideshows, where it was presented as the mummified body of a creature that was supposedly half mammal and half fish, a version of a mermaid. The original object was exhibited by P. History[edit] Mermaids had been presented at shows for centuries. The Fiji Mermaid's Beginning[edit] People's knowledge of the Fiji Mermaid started when Samuel Barrett Edes bought it from Japanese sailors in 1822, which he purchased for $6000.[3] [4] In Edes' possession, it was displayed in London in 1822. P. Once Barnum hired the Fiji Mermaid, he knew he had to get people's attention to actually come examine the specimen. This last act made the plan successful. After Barnum[edit] While exhibited by P. Later incarnations[edit] The Banff Merman, similar to a Fiji Mermaid, on display at the Indian Trading Post

THE QUIET MIND - Sayings of White Eagle www.angels-heaven.org www.universe-people.com THE WHITE EAGLE PUBLISHING TRUST, which publishes and distributes the White Eagle teaching, is part of the wider work of the White Eagle Lodge, a present-day mystery school in which people may find a place for growth and understanding, and a place in which the teachings of White Eagle find practical expression. Here men and women may come to learn the reason for their life on earth and how to serve and live in harmony with the whole brotherhood of life, visible and invisible, in health and happiness. Readers wishing to know more of the work of the White Eagle Lodge may write to the General Secretary, The White Eagle Lodge, New Lands, Brewells Lane, Liss, Hampshire, England GU33 7HY (tel. 01730 893300) or can call at The White Eagle Lodge, 9 St Mary Abbots Place, Kensington, London 18 615 (tel. 020-7603 7914). Our websites and email addresses are as follows. www.whiteagle.org; enquiries@whiteagle.org (worldwide); Introduction ... ... ... ... ...

Mind in Life: Amazon.co.uk: Evan Thompson Evan Thompson draws from the disciplines of biology, philosophy, psychology, and neuroscience to bring about a wide and varied discussion of one of the most significant philosophical questions or our time called the explanatory gap--the gap between our subjective experience and the laws of nature. "Exactly how are consciousness and subjective experience related to the brain and the body?" How is it that our subjective experience of the world sets us apart from our environment, when our environment and life are intricately coupled? Thompson contends that there can be no dualistic separation between the organizational properties of life and mind. In fact, Thompson says in the preface: "...the self-organizing features of mind are an enriched version of the self-organizing features of life." Since it is necessary to understand life in order to comprehend mind, it isn't surprising that the philosophical methodologies used to explaining life are similar to those used to explain mind.

Satanic ritual abuse Engraving by Henry de Malvost in the book "Le Satanisme et la Magie" by Jules Bois depicting a Black mass, part of an earlier moral panic of religious desecration and Satanic ceremonies that was a precursor to the satanic ritual abuse moral panic of the late 20th century Satanic ritual abuse (SRA, sometimes known as ritual abuse, ritualistic abuse, organised abuse, sadistic ritual abuse and other variants) was a moral panic that originated in the United States in the 1980s, spreading throughout the country and eventually to many parts of the world, before subsiding in the late 1990s. Allegations of SRA involved reports of physical and sexual abuse of people in the context of occult or Satanic rituals. At its most extreme definition, SRA involved a worldwide conspiracy involving the wealthy and powerful of the world elite in which children were abducted or bred for sacrifices, pornography and prostitution. History[edit] Historical precedents[edit] Conspiracy accusations[edit]

Yahweh By early post-biblical times, the name of Yahweh had ceased to be pronounced. In modern Judaism, it is replaced with the word Adonai, meaning Lord, and is understood to be God's proper name and to denote his mercy. Many Christian Bibles follow the Jewish custom and replace it with "the LORD". Name[edit] The Tetragrammaton in Paleo-Hebrew (10th century BCE to 135 CE), old Aramaic (10th century BCE to 4th century CE) and square Hebrew (3rd century BCE to present) scripts. History[edit] Origins and adoption as the God of Israel[edit] A YHD drachm, a silver coin probably struck by the Persian administration in Jerusalem (4th century BCE). The earliest putative reference to Yahweh in the historical record occurs in a list of Bedouin tribes of the Transjordan made by Amenhotep III (c. 1391- BCE - 1353 BCE) in the temple of Amon at Soleb. Yw in the Baal Cycle[edit] More recently, the damaged Ugaritic cuneiform text KTU 1.1:IV:14-15 is also included in the discussion:[30] From KTU II:IV:13-14