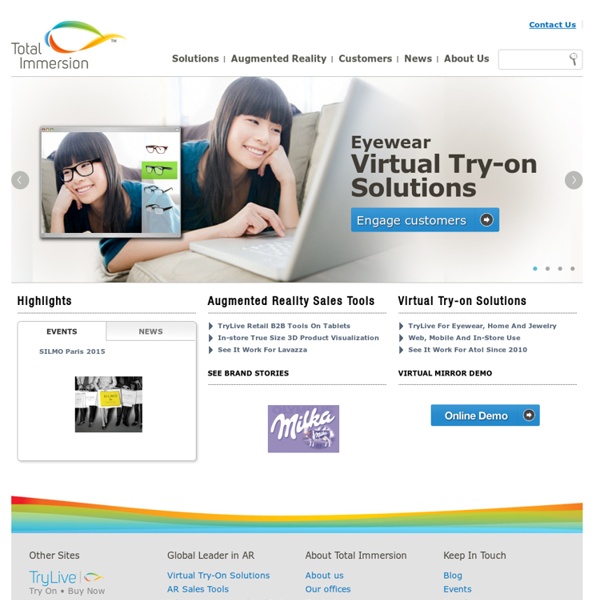 droidar - DroidAR Augmented Reality Framework An framework for Augmented Reality on Android. Location based AR and marker based AR are both possible. Scroll down to see some more Demo Videos Also read the wiki articles for more detailed information about DroidAR. Augmented reality: the next generation Mobile augmented reality (AR) was a favorite of the tech press in 2009, a year that saw the unveiling of mobile AR browsers from Wikitude, Layar and Metaio. Now that the dust has settled, let’s take a look at the current state of the technology and where it will go from here. Mobile AR browsers currently work by using a combination of the mobile phone’s camera, compass and GPS data to identify the user’s location and field of view, retrieve data based on the geographical coordinates, and overlay that data over the camera view.

Android app can recognize a person, pull up his status updates Imagine you’re at a conference and want to know something about the people around you. A new mobile application called Recognizr can identify a person’s face via your phone camera and deliver not only profile information about that person but also show you their latest status updates. Swedish computer vision specialists Polar Rose combined forces with interface designers TAT (The Astonishing Tribe) to create the Recognizr as a prototype application for Android phones to show off Polar Rose’s mobile face recognition library. Marketing Associations Below are some useful links to Industry Associations and events. Click on each organisation's banner or logo to access their website and obtain further information: The AMI represents professional marketers throughout Australia, including practitioners from all marketing functions and industries. The Institute has established strong links with business, academia and government to become the voice of the marketing profession.

Augmented Reality Campaigns - Case Studies Australia According to a report by Visiongain, the value of the global Augmented Reality market was approximately $11 million in Q1 of 2011 whilst Juniper Research estimated the market at the close of 2010 to be $15 million. Despite the discrepancy in figures there is no denying that the future is bright for Augmented Reality. With broadband penetration increasing and improvement in Smartphone feature specifications, the Augmented Reality market could zoom from now until 2015. In fact, Juniper Research is estimating the market will approach close to $15 billion by 2015. Whilst its use has been a little slow out of the blocks, Augmented Reality is starting to gain some traction amongst the marketing community in Australia. In 2011 we have seen higher uptake of AR than ever before with big brands experimenting in the space.