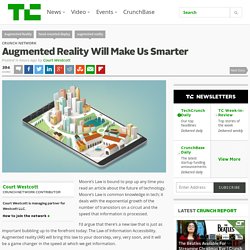 How to join the network Moore’s Law is bound to pop up any time you read an article about the future of technology. Moore’s Law is common knowledge in tech; it deals with the exponential growth of the number of transistors on a circuit and the speed that information is processed. I’d argue that there’s a new law that is just as important bubbling up to the forefront today: The Law of Information Accessibility. We all have experienced the Law of Information Accessibility in the last 30 years, but probably didn’t realize it. When I was in high school, the Internet and the search engine popped up — that’s when things got really interesting.

The pattern here is obvious: We are never satisfied with how quickly technology can deliver us relevant information, making the next logical step obvious. We are about to democratize knowledge. Humans crave omnipotence. Augmented reality expert explains how AR will help humanity. We've been hearing and seeing plenty about augmented reality these days -- from Microsoft's HoloLens to the mysterious Google-backed startup Magic Leap -- but aside from the gee-whiz factor, its benefits can sometimes feel almost as illusory as virtual images. 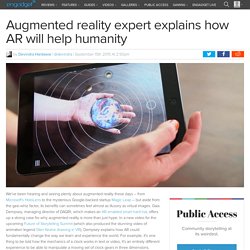 Gaia Dempsey, managing director of DAQRI, which makes an AR-enabled smart hard hat, offers up a strong case for why augmented reality is more than just hype. In a new video for the upcoming Future of Storytelling Summit (which also produced the stunning video of animation legend Glen Keane drawing in VR), Dempsey explains how AR could fundamentally change the way we learn and experience the world. Augmented reality expert explains how AR will help humanity.

How Tomorrow's Battles Will Be Fought in Augmented Reality. The military commander of the future will be making decisions based on the visuals from multiple datasets. 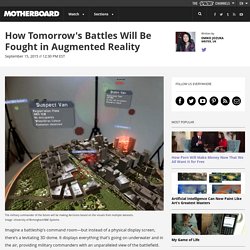 Image: University of Birmingham/BAE Systems Imagine a battleship’s command room—but instead of a physical display screen, there’s a levitating 3D dome. It displays everything that’s going on underwater and in the air, providing military commanders with an unparalleled view of the battlefield. The Future of Sexual Sensing: Virtual Reality, Augmented Reality and Neurostimulation. As the old saying goes: the only constant is change—and the last few years have certainly seen a lot of it. 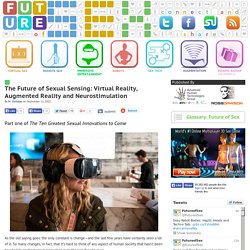 So many changes, in fact, that it’s hard to think of any aspect of human society that hasn’t been touched by technological innovation over the last decade or so. Books became ebooks, the Internet went from novelty to essential, electric and hybrid vehicles have become ubiquitous, gay marriage changed from “don’t talk about it” to “no big deal” (at least in some countries), and 3D printers left the prototype stage to become at-home appliances—just to hit some highlights. But the greatest changes are right around the corner. Cimagine brings 'v-commerce' tech to the furniture showroom. The augmented reality company just sealed a deal with John Lewis, the UK’s largest retailer, to let customers visualize how furniture will truly appear in their living rooms Moving or buying furniture, let’s face it, sounds more exciting than it actually is. 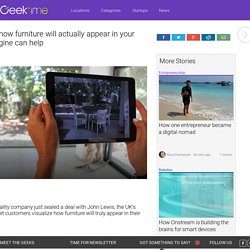 The nitty gritty of planning, with tape measures and just never being too sure how something will look like in your home, tends to throw the best of us for a loop when we finally go shopping for new couches, desks, and dinner tables. Those days might finally be history. Augmented reality is the future of design. In 1992, researcher Tom Caudell coined the term Augmented Reality (AR). 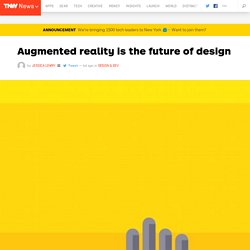 It’s an experience that supplements the real world with a virtual layer of information. Until recently, AR sounded like something from a cyberpunk novel. Some sort of cyborg capability that could go the way of PDAs and laser disks. However AR doesn’t rely on wearable technology (e.g.Google Glass) – and considering the millions who’ve opted for Lasik, it’s hard to imagine people embracing a constant need to wear special eyewear. Even if the cost of Google Glass was more accessible, the fashion faux pas of unchic fashion is a major hurdle – not to mention something blocking your range of sight. 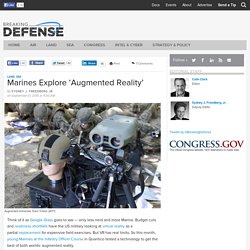 Budget cuts and readiness shortfalls have the US military looking at virtual reality as a partial replacement for expensive field exercises. Marines put ONR's augmented reality system to the test with live-fire testing. Marines enrolled in the Infantry Officer Course were able to use Office of Naval Research (ONR)-developed augmented reality technology for the first time as part of live-fire training exercises, ONR officials announced Aug. 31. 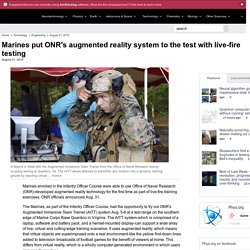 The Marines, as part of the Infantry Officer Course, had the opportunity to try out ONR's Augmented Immersive Team Trainer (AITT) system Aug. 5-6 at a test range on the southern edge of Marine Corps Base Quantico in Virginia. The AITT system-which is comprised of a laptop, software and battery pack, and a helmet-mounted display-can support a wide array of live, virtual and cutting-edge training scenarios. Promoting the Importance of Public Libraries with Augmented Reality.

"The Human Light" and Future of Interior Design - Decorators Way. Coming across technology and its application in interior decor, we decided to look further and dig the most interactive examples recently used in interior design process. 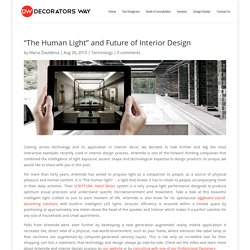 Artemide is one of the forward thinking companies that combined the intelligence of light exposure, laconic shape and technological expertise to design products so unique, we would like to share with you in this post. For more than forty years, Artemide has aimed to propose light as a companion to people, as a source of physical pleasure and mental comfort. It is “The human light” - a light that knows it has to relate to people, accompanying them in their daily activities. Their SCRITTURA, Hand Gestic system is a very unique light performance designed to produce optimum visual precision and understand specific microenvironment and movement.

I AM calls for projects in augmented reality. Image from the third architectural video mapping show in Municipality of Jbail-Byblos realised by Kònic Thtr for the I AM Project As leader of project “I AM – International Augmented Med”, Municipality of Alghero aims to pinpoint projects able to promote and improve, through state-of-the-art augmented reality (AR) technologies, the cultural and environmental heritage of its territory for tourism development. 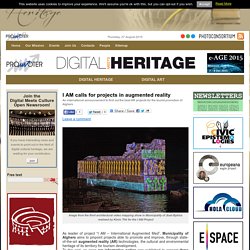 To this end, an open pre-informative notice was published to present three project proposals: a video mapping to be projected on the external façade of de Lo Quarter complex; an App addressed to children, to promote, with a didactic tone, the archaeological site of nuraghe Palmavera; an innovative audio-visual product using remote controlled devices. Will augmented reality save the magazine industry? Mobile Commerce Daily (MCD) just released a fascinating piece regarding a partnership with Blippar (the business not interested in selling to Google - because they, Blippar, will be bigger). Blippar is an augmented reality app whereby you can hold your device over the blippar sign on a product and it comes to life. So yet another challenger for advertising budgets and another distraction to take eyeballs away from print and paper? Well it seems not, in fact it could prove to be the opposite.

The piece in MCD states that: "The September issue of People StyleWatch is getting a mobile makeover thanks to augmented reality application Blippar, enabling readers to scan merchandise to instantly shop the items and receive additional fashion tips and music playlists on their smartphones. " It is often argued that magazines drives ecommerce and now we have the true ROI link - the future for the relevant magazines could be huge as the quality of content will always be king. Mobile-Augmented Reality Set to Boom 06/24/2015. Get ready for a better reality — and more of it. Mobile-augmented reality is set to soar over the next four years, according to a new forecast from market intelligence firm Tractica. The rise of MAR (you kind of have to love the acronym) will have wide-ranging impact across categories that include gaming, entertainment, marketing and advertising. Tractica predicts that the number of actively used MAR apps around the world will jump from 292 million this year to over 2.2 billion in 2019, with a cumulative annual growth rate of 76% over this period.

Digital Billboards Simulate Real World Tornado Disaster. Since Pepsi MAX released their virtual reality bus stop stunt, we’ve been looking forward to seeing another company take the concept up and show us what they’ve got. So, obviously, we were impressed with this recent campaign that ran in Sydney for the film Into The Storm, which used the same virtual reality to trick people into thinking a tornado was heading their way. The Campaign This campaign, run by augmented reality shop Grand Visual, was constructed to promote tornado-themed disaster film Into The Storm. Framed similarly to a traditional movie poster street display, the box was actually a high-definition video screen. What started as the ‘poster’ getting blown away by rising gusts, then exhibited a clear view of the street behind it getting torn apart by the storm, to the shock (or delight) of the on-street audience. Augmented Reality Inform, Entertain, Empower. Future Tech 2025: An Interview with Scott O’Brien, Augmented Reality OMG In this Future Tech interview, we’re speaking with Scott O’Brien, Founder of Augmented Reality OMG.

As an Augmented Reality (AR) pioneer since 2009 and delivering what is still to this day, the worlds most sophisticated cinematic AR eyewear experience, Scott O’Brien has been moving AR from “magic show” to functional use cases and mass adoption. These days he consults worldwide under Augmented Reality OMG and organises AR, VR, wearables and IoT events through Reality Remix primarily in Asia Pacific. Con la realtà aumentata saremo tutti dei geni? ~ HoloLens Italia.

Virtual Reality vs Augmented Reality Virtual reality, or VR, has a reputation for being for hardcore gamers. You know: the serious tech heads who don’t think it’s at all strange to sit in a room with a giant set of black goggles over their eyes and interact with people, places, and things that don’t actually exist. For the rest of us, there’s probably a healthy curiosity about VR, but it’s not to the point where we’re willing to spend a few hundred pounds on a serious piece of equipment. How augmented reality will change the world as we know it. What Augmented Reality Is—And Isn't - ReadWrite. Augmented reality: Is this the real life? Virtual and real worlds are moving closer together. Augmented reality (AR) is expected to be used by brands embracing the technology more in their advertising campaigns, as well as beyond onto the high street.

Increased interactivity and customer engagement are just two of the rewards for the investment. How augmented reality will change the world as we know it. Just-in-Place: The Case for Augmented Reality in AEC. This post by Dace Campbell previously appeared on the AEC Industry website Beyond Design. Augmented reality enables a new way of working. "AR will be the biggest technological revolution in our lifetimes" 48 Crazy Ideas Coming From The $2 Billion Stealth Startup Magic Leap. Last October, Fast Company broke news about a stealth startup named Magic Leap that had raised $542 million in a round of financing led by Google.