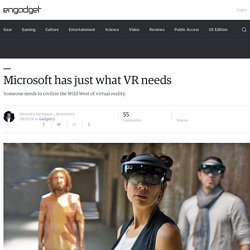 Facebook has Oculus; Valve and HTC are betting on SteamVR for the Vive; Sony has its upcoming PlayStation VR; and Google is focusing on its DayDream platform for Android. At this point, Oculus and Sony are practically Apple-like, refined pieces of consumer hardware on platforms that nothing else can run on. Virtual reality theme park The Void opening its first outpost in Times Square. The most talked about experience in technology over the last six months has to be The Void, an immersive virtual reality theme park based in Utah that transports users to another world they can see, feel, and interact with. 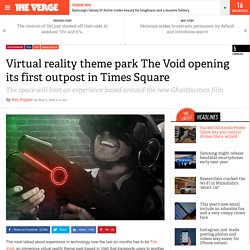 It uses a VR headset powered by a supercomputer backpack to allow for untethered walking. Participants wear a haptic suit that tracks their movement and provides a sensory experience. Google Glass lets parking wardens scan for fines in seconds. Traffic wardens in Tampere, Finland, are now using Vincit’s app and Google Glass devices to vastly increase the number of parked cars they are able to check each hour. 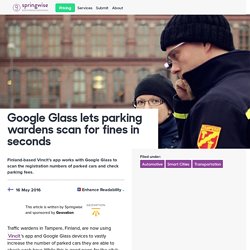 While this is good news for the city’s bank account, the app is likely to be received with far less enthusiasm by residents and visitors. First, wardens focus the Google Glass on a car’s registration number. Then, the app will identify the vehicle and scroll through the EasyPark database to check whether the driver has paid to park using the mobile system. Depending on the results, wardens may then manually check if the driver used the pay-and-display machine. If the allotted time has expired or the space was never paid for, wardens can issue a ticket. Holographic assistant brings us one step closer to AI butlers. Mark Zuckerberg made headlines earlier this month when he said he hoped to build an artificial intelligence assistant that can help him around the house and at the office. 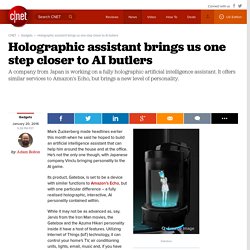 He's not the only one though, with Japanese company Vinclu bringing personality to the AI game. Its product, Gatebox, is set to be a device with similar functions to Amazon's Echo, but with one particular difference -- a fully realised holographic, interactive, AI personality contained within. While it may not be as advanced as, say, Jarvis from the Iron Man movies, the Gatebox and the Azuma Hikari personality inside it have a host of features. Utilizing Internet of Things (IoT) technology, it can control your home's TV, air conditioning units, lights, email, music and, if you have one, the heating of your automatic bathtub.

InkHunter is an AR app for trying tattoos before you ink indelibly. Samsung’s VR bedtime stories are cute, but really? Samsung worries about your child. 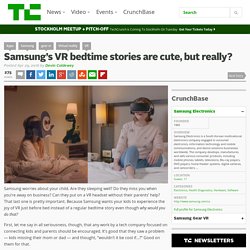 Table tennis trainer. The basic idea of my bachelor thesis was to track the ping pong ball in realtime to create data visualisations for trainers and players. 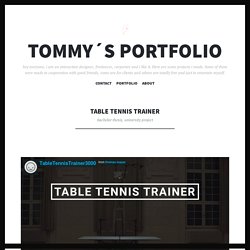 After a few weeks of working I started developing a projected mapped interface for the ping pong table to show the collected data. By projecting game obstacles on the surface I figured out that I can change the game play totally. With 230 km/h table tennis balls are the fastest balls within balls sports the dashboard animations shows the calendar function, the settings and the highscore panel. This here is the dashboard for a single player. Magic Leap demo video gives a glimpse at 'mixed reality' Bandai Namco opening VR Zone in Tokyo on April 15. Bandai Namco opening VR Zone in Tokyo on April 15 Rescue a cat on a thin plank 200 meters above ground. 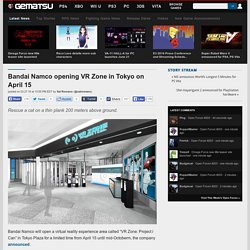 Bandai Namco will open a virtual reality experience area called “VR Zone: Project i Can” in Tokyo Plaza for a limited time from April 15 until mid-Octoberm, the company announced. Inner-ear stimulation cures VR motion sickness. Microsoft's 'holoportation' with HoloLens is blowing my mind. You can do a lot of impressive things with HoloLens, Microsoft’s augmented reality (AR) headset. 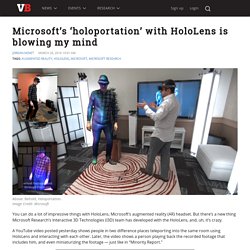 But there’s a new thing Microsoft Research’s Interactive 3D Technologies (I3D) team has developed with the HoloLens, and, uh, it’s crazy. A YouTube video posted yesterday shows people in two difference places teleporting into the same room using HoloLens and interacting with each other. Later, the video shows a person playing back the recorded footage that includes him, and even miniaturizing the footage — just like in “Minority Report.” This “holoportation” goes beyond Hooli CEO Gavin Belson’s “telehuman” telepresence concept, featured in the comedy show “Silicon Valley” — because holographic representations can walk around the room, thanks to cameras recording footage from many angles. 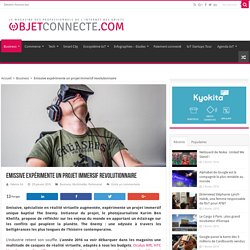 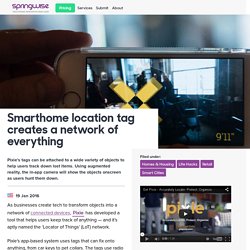 Pixie’s app-based system uses tags that can fix onto anything, from car keys to pet collars. The tags use radio frequency to communicate with each other, and low-energy Bluetooth 4.0 to communicate with the app. Using augmented reality, the in-app camera will show tagged objects onscreen, even through walls. Tech in Asia - Connecting Asia's startup ecosystem. Augmented reality device turns your arm into a keyboard. Japanese electronics maker NEC has unveiled a unique input mechanism that allows you to type on your arm using augmented reality. The system is called the ARmKeypad and it combines a set of glasses to visualize the virtual keyboard and a smartwatch to detect how fast you type.

Designed as a means to give workers a "hands-free" way of working while maintaining the ability to input text into a database, the company describes the ArmKeypad as better than other next-gen input methods such as voice interfaces, which are difficult to operate in noisy environments. Magic Leap Demo. Disney Creates Augmented Reality Coloring Books. Real World Pokémon Lets You Catch ‘em All On Your Commute. Microsoft HoloLens: Partner Spotlight with Case Western Reserve University. Gloveone Smart Gloves Will Let You Feel Virtual Reality. THE VOID. BLEEN - 3D Without Glasses. Q: I have a problem with my payment. Please contact support@indiegogo.com. Q: Do you plan to use Bleen technology in smartphones or tablets?

Currently, it’s impossible to put Bleen Projection System into smartphones or tablets. This virtual reality system takes your cycling workouts to the streets. Your spin class may never be the same again. An Italy-based team has come up with an innovative new product that promises to mix the Oculus Rift with a responsive, real-world bike. The resulting effect is a set up that lets you ride in any number of environments — from midtown Manhattan to a secluded mountain path — allowing you to sweat during your biking trip on the streets of Tokyo, while never leaving your home. One of the best parts of the system, called Widerun, is that it allows you to use your existing bike rather than requiring you to clutter your home with a large stationary bike. Your own, street-ready bike fits into Widerun's docking station, which uses an embedded microcontroller to simulate steering, speed and the resistance effects corresponding to your virtual environment. Forbes Welcome.