48 Crazy Ideas Coming From The $2 Billion Stealth Startup Magic Leap. Last October, Fast Company broke news about a stealth startup named Magic Leap that had raised $542 million in a round of financing led by Google. 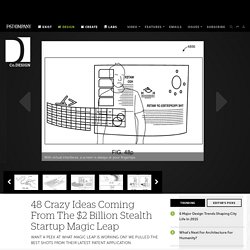 Names attached ranged from the mobile hardware makers at Qualcomm to the special effects studio Weta. But what the heck were they building? Augmented reality (AR) glasses were our best guess. Now, Magic Leap has begun filing patents, which give us a much better look at their plans. Glasses? Their latest application is a 180-page opus for user interface, filled with a surplus of imaginative sketches illustrating the platform’s potential. The hardware appears to be a pair of glasses with fiber optic projectors. Hand gestures within your line of sight can pull up menus and issue commands. Here we see the first of many "totems" in the documentation.

Totems can be dumb, non-descript objects in the real world, but painted with a digital skin in Magic Leap's augmented world. Totems can also take the form of controllers. Pinch-to-zoom? [via the Verge] Google Glass: Artificial Unconscious? : Neuroskeptic. Google Glass is cool. 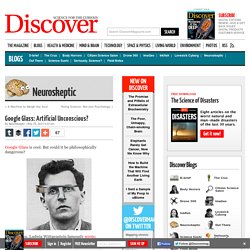 But could it be philosophically dangerous? 60 years ago, Ludwig Wittgenstein famously wrote: Where does this idea come from? It is like a pair of glasses on our nose through which we see whatever we look at. It never occurs to us to take them off. The “idea” in this case was a particular philosophical theory about language. Perhaps all technology so far has been an extension of the conscious parts of our mind. Google Glass and other smart glasses do all that as well, but I wonder if they’ll soon go one better: they could extend or modify our unconscious mental processes. Consider, for example, some smart glasses set up to detect anything that looked like a spider in front of its camera, and overlay it with a red flashing box on the user’s display if spotted.

Now, I think this would make you obsessed with spiders. Or again, your glasses could analyze the facial expressions of people you meet, perhaps displaying the results (85% happy, etc…) floating above their heads. Pattie Maes and Pranav Mistry demo SixthSense. Goggles. Face.com Brings Facial Recognition to the Masses, Now with Age Detection: Interview With CEO. Face.com's API now returns an age estimation for faces it detects in photos - seen here with some recognizable examples. 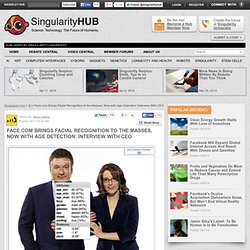 Looking at someone’s face can tell you a lot about who they are. Running a picture through Face.com‘s systems let’s you turn those instincts into cold hard data. The Israel-based company has made a name for itself over the past few years by providing some of the best facial recognition technology available on the web. To date, developers all over the world have used their API to find nearly 41 billion faces!

More than just detecting and identifying faces, the Face.com API provides all sorts of great data: gender, presence of a smile, approximate mood, etc. Instead of trying to understand what makes someone look a certain age, Face.com simply let their program figure it out on its own. Face.com does a pretty good estimation for this pic of Brad Pitt. In the end, though, the only really important thing to ask about Face.com’s Age Detection, is “does it work.” How to camouflage yourself from facial recognition technology. The day when you’ll be able to hold up your phone and identify a stranger through a viewfinder is getting closer. 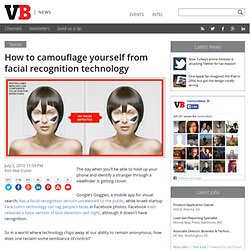 Google’s Goggles, a mobile app for visual search, has a facial recognition version unreleased to the public, while Israeli startup Face.com’s technology can tag people’s faces in Facebook photos. Facebook even released a basic version of face detection last night, although it doesn’t have recognition. So in a world where technology chips away at our ability to remain anonymous, how does one reclaim some semblance of control? It turns out there’s actually a pretty simple way around the facial recognition technology available in the market today, according to Adam Harvey, a graduate student at NYU’s ITP (the same program that produced Foursquare chief executive Dennis Crowley and that Twitter’s location guru Raffi Krikorian taught at).

“It breaks apart the gestalt of the face,” he said. Glass - Home. Watson.