Augmented World. Gasshopper.iics is a group of like minded programmers and learners in codeproject. 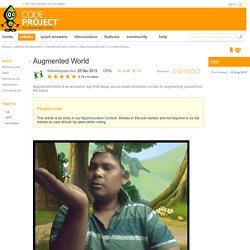 The basic objective is to keep in touch and be notified while a member contributes an article, to check out with technology and share what we know. We are the "students" of codeproject. This group is managed by Rupam Das, an active author here. Other Notable members include Ranjan who extends his helping hands to invaluable number of authors in their articles and writes some great articles himself. Rupam Das is mentor of Grasshopper Network,founder and CEO of Integrated Ideas Consultancy Services, a research consultancy firm in India.

He is frustrated with his poor writing and "grammer" skills but happy that coding polishes these frustrations. Unity 3D Game Creation using C# Script. In this article let’s see how to Introduction to Unity 3D. 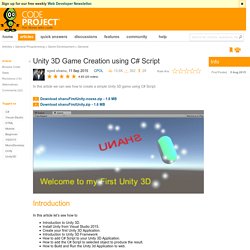 Install Unity from Visual Studio 2015. 2015ISMAR_ondruska. Microsoft wants you to scan in 3D using only your phone. If you want to do some 3D scanning, you usually have to get either a dedicated scanner or a less-than-elegant add-on. 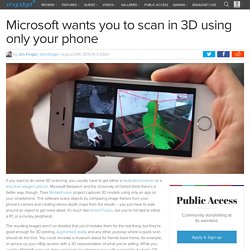 Microsoft Research and the University of Oxford think there's a better way, though. Their MobileFusion project captures 3D models using only an app on your smartphone. The software scans objects by comparing image frames from your phone's camera and creating stereo depth maps from the results -- you just have to walk around an object to get more detail. It's much like Kinect Fusion, but you're not tied to either a PC or a clunky peripheral. The resulting images aren't so detailed that you'd mistake them for the real thing, but they're good enough for 3D printing, augmented reality and any other purpose where a quick scan should do the trick.

Apple iPhone 6 Type Smartphone Operating system iOS (8) Screen size 4.7 inches Internal memory 16 GB Camera 8&#160;megapixels Dimensions 5.44 x 2.64 x 0.27 in Weight 4.55 oz Released 2014-09-19 see all specs → Virtual reality: it's ready, it's the future and it's really scary... Hologram Projectors For Your Smartphone Could Be Close. Just in time for the new Star Wars film, it seems the technology from the originals is starting to come true. 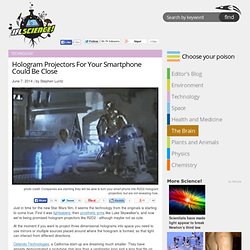 First it was lightsabers, then prosthetic arms like Luke Skywalker's, and now we're being promised hologram projectors like R2D2 - although maybe not as cute. At the moment if you want to project three dimensional holograms into space you need to use mirrors or multiple sources placed around where the hologram is formed, so that light can interact from different directions. Ostendo Technologies, a California start-up are dreaming much smaller. They have already demonstrated a prototype chip less than a centimeter long and a lens that fits on the palm of your hand. This tiny apparatus can, they say, control the color and brightness of enough LED beams to light up a million pixels on a screen with a 1.2m diagonal.

What Ostendo are not revealing is how they manage to project these images onto the air from a single direction. Ultrasound Used To Create 3D Shapes In Mid Air That Can Be Seen And Felt. You may not have heard of it before, but haptic technology is all around us. 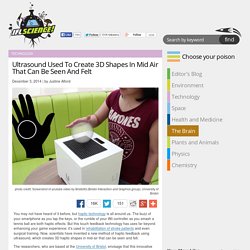 The buzz of your smartphone as you tap the keys, or the rumble of your Wii controller as you smash a tennis ball are both haptic effects. But this touch feedback technology has uses far beyond enhancing your game experience; it’s used in rehabilitation of stroke patients and even surgical training. Now, scientists have invented a new method of haptic feedback using ultrasound, which creates 3D haptic shapes in mid-air that can be seen and felt.

The researchers, who are based at the University of Bristol, envisage that this innovative technology could transform the way that we use 3D haptic shapes. It could lead to touchable holograms to augment learning, or enhanced gaming experience by allowing users to feel features of the game, such as a football. By adding these invisible 3D shapes to 3D displays, scientists can create something that can be both seen and felt. The Simple Idea behind This Mind-Blowing 3D Interactive Sandbox. Playing in the sandbox used to be my favorite activity as a small child. 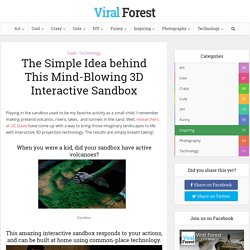 I remember making pretend volcanos, rivers, lakes, and tunnels in the sand. Well, researchers at UC Davis have come up with a way to bring those imaginary landscapes to life with interactive 3D projection technology. The results are simply breath-taking! When you were a kid, did your sandbox have active volcanoes? This amazing interactive sandbox responds to your actions, and can be built at home using common-place technology.

All it takes is a digital projector and a Kinect. The projector displays an interactive topographic map, with contour and elevation in real-time. You can make hills and valleys, and the computer changes the projection to match the landscape! Museums around the world are starting to create their own interactive sandboxes… The 10 Coolest Augmented Reality Apps. KinEmote - Free XBox Kinect Software for Windows.