AnOther Digital Limited Edition. Inside this box is the world’s first high-definition moving magazine cover. 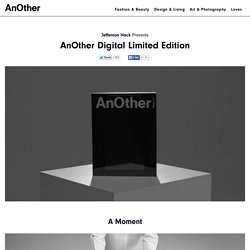 AnOther Magazine, PCH, Rihanna and Alexander McQueen have collaborated to bring the latest new technologies to a traditional magazine format. This is the moment that print became digital. Buy it now. Sephora Adds Interactive Digital Touches. Beauty retailer Sephora is rolling out beacons, iPhone-based augmented reality and an Amazon Prime-style shipping service as part of a “digital experience” makeover of its U.S. stores, according to Forbes. 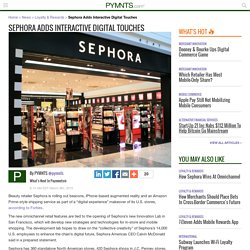 The new omnichannel retail features are tied to the opening of Sephora’s new Innovation Lab in San Francisco, which will develop new strategies and technologies for in-store and mobile shopping. The development lab hopes to draw on the “collective creativity” of Sephora’s 14,000 U.S. employees to enhance the chain’s digital future, Sephora Americas CEO Calvin McDonald said in a prepared statement. Sephora has 360 standalone North American stores, 420 Sephora shops in J.C. Penney stores, and 1,780 locations in 29 countries worldwide. It’s not clear whether all of the new digital features will make it to all those retail locations. The digital rollout also includes two smartphone-based features. Image Recognition Apps. CAS – Central Authentication Service. The Wrong New Digital Art Biennial Brings Together The Best Of The Net. The Wrong, dubbing itself ‘The New Digital Art Biennial’ has officially gone online as of November 1st, and will be open untill the final day of 2013. 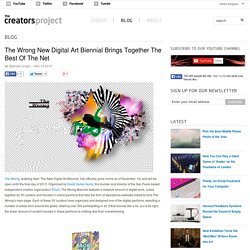 Organized by David Quiles Guillo, the founder and director of the Sao Paolo-based independent creative organization ROJO, The Wrong Biennial features a massive amount of digital work, culled together by 30 curators and housed in online pavilions that take the form of standalone websites linked to from The Wrong’s main page. This Museum Displays Stolen Artworks in Augmented Reality. Images via Before ITP graduate student Ziv Schneider created the Oculus Rift-accessible Museum of Stolen Art, halfway across the world another institution—also called the Museum of Stolen Art—was debuting its gallery exhibition of works currently reported stolen or missing. 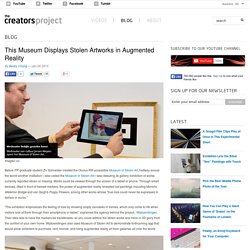 Works could be viewed through the screen of a tablet or phone. This Augmented Reality App Blocks Advertisements With Digital Art. A morning commute in New York City can often feel like trying to browse the web in the days before AdBlocker—bright, ugly advertisements vie for your attention—a visual cacophony that can quickly become a headache. 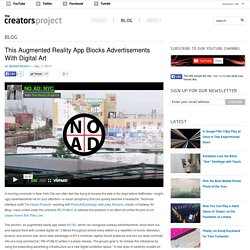 Technical interface outfit The Heavy Projects—working with PublicAdCampaign and Jowy Romano, creator of Subway Art Blog—have united under the umbrella RE+PUBLIC to address this problem in an effort not unlike the plot of cult classic horror flick They Live. The solution: an augmented reality app called NO AD, which can recognize subway advertisements, block them out, and replace them with curated digital art. "Littered throughout almost every station is a repetition of movie, television, product, and alcohol ads, which take advantage of NY’s immense captive transit audience and turn our daily commute into one long commercial," RE+PUBLIC writes in a press release. Check out RE+PUBLIC's other AR efforts on their website, and download the NO AD app here. Related: Augmented Reality GIF-ITI App Brings INSA's Moving Murals To Your Smartphone. 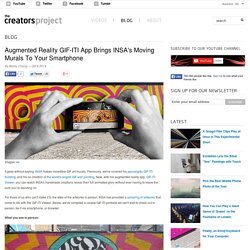 Listen To The Color Of Pizza With This Synesthetic App. Instead of playing that 50 Cent throwback playlist at your upcoming house party, why not try a magenta or green DJ set? 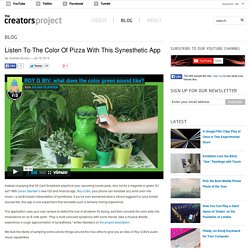 With Julian Glander’s new iOS and Android app, Roy G Biv, your phone can translate any solid color into music—a synth-based interpretation of synethesia. If you've ever wondered what a vibrant eggplant or juicy tomato sounds like, this app is one experiment that simulates such a sensory-mixing experience. The application uses your rear camera to detect the hue of whatever it's facing, and then converts the color data into modulations for an 8-note synth. “Play a multi-coloured symphony with some friends, take a musical #selfie, experience a rough approximation of synesthesia," writes Glanders on the project description.

We took the liberty of sampling some colorful things around the Vice office to give you an idea of Roy G Biv's audio-visual capabilities. Augmented Reality App Allows Museum Audiences To "X-Ray" Artwork. It's often taken for granted that the final image on a dried, painted canvas is wholly representative of an artwork in its most unsullied and purest form. 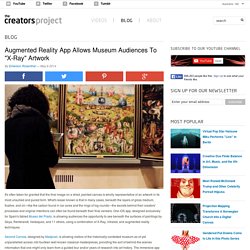 What's lesser known is that in many cases, beneath the layers of gloss medium, fixative, and oil—like the carbon found in ice cores and the rings of log rounds—the secrets behind their creators' processes and original intentions can often be found beneath their final veneers. One iOS app, designed exclusively for Spain's fabled Museo del Prado, is allowing audiences the opportunity to see beneath the surfaces of paintings by Goya, Rembrandt, Velásquez, and 11 others, using a combination of X-Ray, infrared, and augmented reality techniques. Below, X-Ray imaging of Rogier van der Wyden's Descent From the Cross reveals that John The Baptist once sported a trickle of blood running down his neck: Second Canvas' infrared scanning feature strips images down to their barest, originally-intended, and most unrefined forms: h/t Telegraph Related: 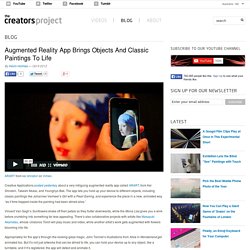 Creative Applications posted yesterday about a very intriguing augmented reality app called ARART, from Kei Shiratori, Takeshi Mukai, and Younghyo Bak. The app lets you hold up your device to different objects, including classic paintings like Johannes Vermeer’s Girl with a Pearl Earring, and experience the piece in a new, animated way “as if time trapped inside the painting had been stirred alive.” Vincent Van Gogh’s Sunflowers shake off their petals so they flutter downwards, while the Mona Lisa gives you a wink before crumbling into something far less appealing.