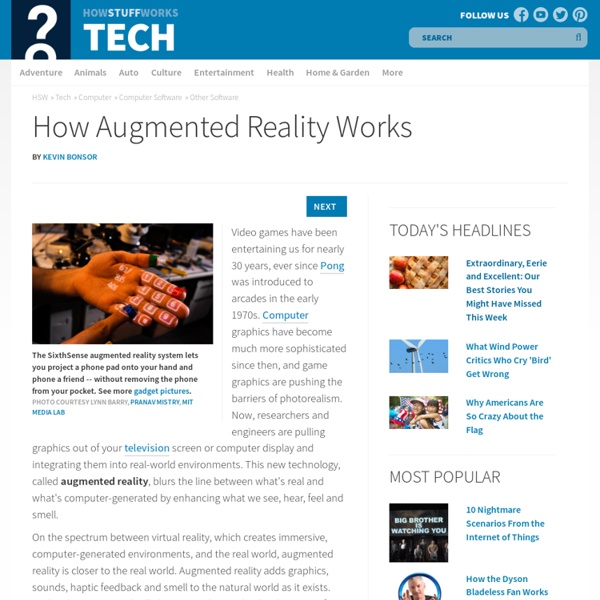 Video games have been entertaining us for nearly 30 years, ever since Pong was introduced to arcades in the early 1970s. Computer graphics have become much more sophisticated since then, and game graphics are pushing the barriers of photorealism. Now, researchers and engineers are pulling graphics out of your television screen or computer display and integrating them into real-world environments. This new technology, called augmented reality, blurs the line between what's real and what's computer-generated by enhancing what we see, hear, feel and smell. On the spectrum between virtual reality, which creates immersive, computer-generated environments, and the real world, augmented reality is closer to the real world. Augmented reality adds graphics, sounds, haptic feedback and smell to the natural world as it exists. Augmented reality is changing the way we view the world -- or at least the way its users see the world.

Using augmented reality and knowledge-building scaffolds to improve learning in a science museum Allen, S. (2002). Looking for learning in visitor talk: A methodological exploration. In G. Leinhardt, K. Crowley, & K. Augmented reality NASA X38 display showing video map overlays including runways and obstacles during flight test in 2000. Augmented reality (AR) is a live direct or indirect view of a physical, real-world environment whose elements are augmented (or supplemented) by computer-generated sensory input such as sound, video, graphics or GPS data. It is related to a more general concept called mediated reality, in which a view of reality is modified (possibly even diminished rather than augmented) by a computer.

What is Augmented Reality (AR) As you wait anxiously in the motionless horde of cars tangled in rush hour traffic, you gather surrounding statistics through your digital LED contact lenses. Tom’s Pizzeria is five blocks ahead and was ranked four out of five stars by customer reviews. As for the woman in the beige Honda beside you, she has a Jack Russell Terrier named Charlie, is originally from Texas, and her favorite book is Emily Bronte’s Wuthering Heights. The pack loosens up and you finish your commute home. Three blocks away from your house though, your lenses display a Tweet from your wife, which says she’s watching a rerun of Seinfeld and is hungry for pizza. You consider turning around—Tom’s did get good reviews—but you proceed to your final destination instead, using turn-by-turn directions that appear above every intersection.

5 reasons to use Augmented Reality in Education - Augment News By integrating augmented reality into your lectures, you’ll capture the attention of your audience. You will have their undivided attention. For instance, a teacher in dentistry integrated Augment into his lessons to show 3D models of teeth and how the human jaw works. Let your audience participate! Students are able to access models on their own devices via Augment’s app. By viewing augmented models, the students can gain a better understanding of the concepts they are studying.

What is augmented reality (AR)? - Definition from WhatIs.com Augmented reality is the integration of digital information with the user's environment in real time. Unlike virtual reality, which creates a totally artificial environment, augmented reality uses the existing environment and overlays new information on top of it. Boeing researcher Thomas Caudell coined the term augmented reality in 1990, to describe how the head-mounted displays that electricians used when assembling complicated wiring harnesses worked. One of the first commercial applications of AR technology was the yellow "first down" line that began appearing in televised football games sometime in 1998. Today, Google glass and heads-up displays in car windshields are perhaps the most well-known consumer AR products, but the technology is used in many industries including healthcare, public safety, gas and oil, tourism and marketing. Learn how augmented reality is being used by phlebotomists:

Is Pokemon Go Finally Making Augmented Reality Mainstream? Until Pokemon Go became a viral phenomenon by amassing more than 100 million downloads in a few weeks, augmented reality was confined to tech types and sci-fi fiends. However, thanks to the game, many have now tried AR for the first time, as kids and adults alike roam through town catching digital monsters superimposed on a physical world. "I put this up there with the first time you saw the iPhone, the first time you saw the connectivity and relationship definition of Facebook," said Michael Koziol, president of Huge's office in Atlanta. Pokemon wasn't the first company to try AR—Yelp, Macy's and Starbucks were early adopters, to mixed results—it just ended up being the breakthrough effort. Given its success, naturally other brands and agencies are scrambling to figure out how they might try it. This week, Porsche is unveiling a new augmented reality experience with a five-page, gatefold ad in Outside magazine featuring a photo of the Swiss Alps.

Augmenting Our World - How Augmented Reality Works The basic idea of augmented reality is to superimpose graphics, audio and other sensory enhancements over a real-world environment in real time. Sounds pretty simple. Besides, haven't television networks been doing that with graphics for decades? However, augmented reality is more advanced than any technology you've seen in television broadcasts, although some new TV effects come close, such as RACEf/x and the super-imposed first down line on televised U.S. football games, both created by Sportvision. But these systems display graphics for only one point of view.

32 Augmented Reality Apps for the Classroom by edshelf: Reviews & recommendations of tools for education Augmented Reality (AR) is a growing field of technology where real life is modified and enhanced by computer-generated sights and sounds. The most common use of AR can be seen through mobile apps. Point your device’s camera at something that the app recognizes, and it will generated a 3D animation or video superimposed over whatever is on your camera’s screen. The effect makes the computer-generated item appear like it’s really there. Want to see how it works? Pokémon Go Brings Augmented Reality to a Mass Audience Pokémon, a hybrid of the words “pocket” and “monsters,” belongs to the Pokémon Company, which is partly owned by Nintendo, the Japanese game pioneer, which has struggled to adapt to the era of gaming on mobile devices like smartphones and tablets. In the cartoon, Pokémon trainers use characters to battle each other for sport. The uptake of Pokémon Go, which is so far available only in the United States, Australia and New Zealand, has been so furious that it sent Nintendo’s market capitalization soaring $9 billion in the last few days. Pokémon Go, though, is actually the work of a start-up, Niantic Inc., which was created inside Google and spun out of the company last year. Niantic’s first game, a science-fiction conspiracy thriller called Ingress, was made possible by Google’s digital mapping service. About 15 million users have downloaded Ingress, and there are a little over one million active players a month, said John Hanke, Niantic’s chief executive.

20 Ways to Use Augmented Reality in Education Second Life proved an incredibly valuable tool for educators hoping to reach a broad audience — or offering even more ways to learn for their own bands of students. Augmented Reality Development Lab: Affiliated with Google, Microsoft, and Logitech, the Augmented Reality Development Lab run by Digital Tech Frontier seeks to draw up projects that entertain as well as educate. The very core goal of the ARDL involves creating interactive, three-dimensional objects for studying purposes. Reliving the Revolution: Karen Schrier harnessed GPS and Pocket PCs to bring the Battle of Lexington to her students through the Reliving the Revolution game, an AR experiment exploring some of the mysteries still shrouding the event — like who shot first!