Outlook Web App. iPad and Augmented Reality (or bringing your walls to life part 2) iPad Published on July 27th, 2012 | by Mark Anderson Bring the walls of your classroom (almost literally) to life! 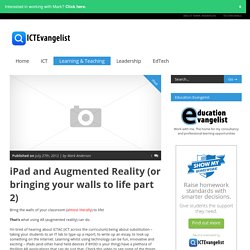 That’s what using AR (augmented reality) can do. I’m tired of hearing about ICTAC (ICT across the curriculum) being about substitution – taking your students to an IT lab to type up a report, to write up an essay, to look up something on the Internet. Learning whilst using technology can be fun, innovative and exciting – iPads (and other hand held devices if BYOD is your thing) have a plethora of thrilling AR applications that can do just that. The first and last examples in the video are from a free app called ‘Zappar’ – available on iPad and other devices: Simply load up the app, choose the right section, eg: Moby Dick – point the iPad at the front cover and enjoy the interactive experience that awaits.

The second example comes from an iPad app called ‘Mona Lisa 3D’ (69p) ( – simply point the iPad at an image of the Mona Lisa and watch her come to life. Want more information? 10 Practical Uses for Augmented Reality in the Classroom. Augmented reality is quickly becoming recognized as a useful tool in the classroom, and new technology is making it more accessible even for educators who’ve never used it before. 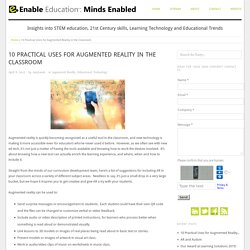 However, as we often see with new ed tech, it’s not just a matter of having the tools available and knowing how to work the devices involved. It’s about knowing how a new tool can actually enrich the learning experience, and where, when and how to include it. Straight from the minds of our curriculum development team, here’s a list of suggestions for including AR in your classroom across a variety of different subject areas. Needless to say, it’s just a small drop in a very large bucket, but we hope it inspires you to get creative and give AR a try with your students. 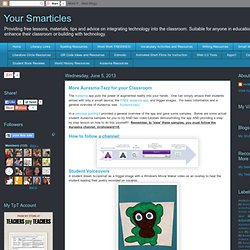 One can simply amaze their students armed with only a smart device, the FREE aurasma app, and trigger images. For basic information and a general overview of Aurasma, see: Aurasma-tazz. In a previous posting I provided a general overview of the app and gave some samples. Below are some actual student Aurasma samples for you to try AND two video tutorials demonstrating the app AND providing a step by step lesson on how to do this yourself!! Remember, to 'view' these samples, you must follow the Aurasma channel, mrshoward118. AR Tutorials. Apply for a FREE 4D Studio for Education account HERE Sign up for a LIVE 4D Studio Webinar with Us HERE Download the DAQRI application. 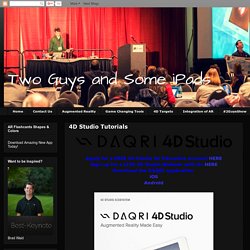 Integration of AR. Meaningful Integration of Augmented Reality in Education Below you will find a list of ideas and apps to help meaningfully integrate augmented reality into education. 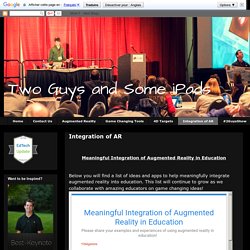 This list will continue to grow as we collaborate with amazing educators on game changing ideas! Homework Mini-Lessons: Grade Level: All grades We use Explain Everything for many activities in our classrooms. Grade Level: PK-2, ELL. Augmented Reality. AR Circuits - Augmented Reality Electric Circuit Kit With the AR Circuits app students can build and test simple realistic circuits using augmented reality technology. The app allows you to build circuits without the expense, safety concerns, and inconveniences associated with physical electric components. The circuits are designed by arranging printed paper component cards. The circuits can then be tested and interacted with using the AR Circuits app and the camera on your mobile device.

The components currently available include one battery, one switch, two bulbs, and three wires. Tons of Classroom Examples Using Augmented Reality with @Aurasma - A Complete How-To Guide! How to Use Augmented Reality in Your Classroomthis post is read best via a desktop due to the embedded video content Augmented reality allows someone to add another layer to an existing image. 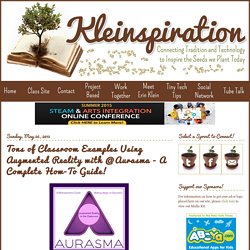 For example, imagine holding your phone over a poster on the wall as if you were going to take a photo of that poster, and then instantly a video starts playing to offer you additional information about that particular poster. Pretty cool, right? The first time it happens, it seems like magic. The iPad Comes Alive with Augmented Reality. Aurasma Studio Tutorials and Webinars. Aurasma Lite Tutorial 1 - Create your own Aura. Home Page - Aurasma. Appealing Apps for Educators: Augmented Reality for Educational Engagement - iPhone app article - Julene Reed.

Augmented reality is being increasingly embraced as an effective tool for education, and its creative use is exploding. 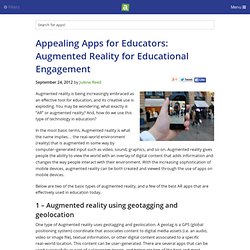 You may be wondering, what exactly is “AR” or augmented reality? And, how do we use this type of technology in education? In the most basic terms, Augmented reality is what the name implies… the real–world environment (reality) that is augmented in some way by computer–generated input such as video, sound, graphics, and so on. Augmented reality gives people the ability to view the world with an overlay of digital content that adds information and changes the way people interact with their environment. With the increasing sophistication of mobile devices, augmented reality can be both created and viewed through the use of apps on mobile devices. Augmented Reality in Education.

Augmented Reality (AR) is becoming more and more a part of academic life. 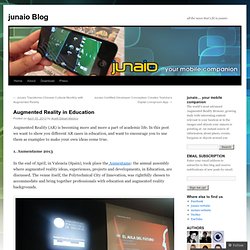 In this post we want to show you different AR cases in education, and want to encourage you to use them as examples to make your own ideas come true. 1. Aumentame 2013 In the end of April, in Valencia (Spain), took place the Aumentame: the annual assembly where augmented reality ideas, experiences, projects and developments, in Education, are discussed. The venue itself, the Polytechnical City of Innovation, was rightfully chosen to accommodate and bring together professionals with education and augmented reality backgrounds. Mariano Alcañiz from LabHuman on stage Remarkable augmented reality projects were demonstrated throughout the day, with participants given the ability to participate in the workshops showcasing such technology in education. 2.

The application Brutus, created by Brad Henry, helps students explore the Ohio State Campus through their mobile Android devices. 3. Pedagogical arguments for Augmented Reality as an educational tool - Jisc RSCs Blog. Share Two weeks ago I was invited to the Mimas presentation to showcase the Scarlet and Scarlet+ project outcomes. 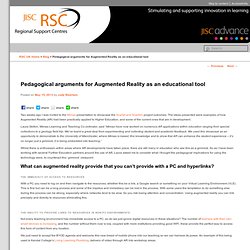 The ideas presented were examples of how Augmented Reality (AR) had been practically applied to Higher Education, and some of the current ones that are in development. Laura Skilton, Mimas Learning and Teaching Co-ordinator, said ”Mimas have now worked on numerous AR applications within education ranging from special collections to a geology field trip. We’ve learnt a great deal from experimenting and collecting student and academic feedback. We used this showcase as an opportunity to demonstrate to the University of Manchester, where Mimas is based, this knowledge and to show that AR can enhance the student experience – it’s no longer just a gimmick, it is being embedded into teaching.”

Whilst there is enthusiasm within areas where AR developments have taken place, there are still many in education who see this as a gimmick. The immediacy of access to resources. Augmented Reality in Education. 5 Uses of Augmented Reality in Education. Last week I mentioned augmented reality during a presentation and I could tell from the looks on some people's faces that augmented reality was a new thing to them. 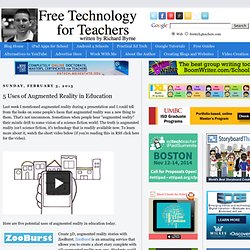 These apps can be used in everyday applications and even more so for educational purposes. 1.