Unity or Tribalism: The Cultural Promises of Augmented Reality

TED Talks - What FACEBOOK And GOOGLE Are Hiding From The World - The Filter Bubble. The Bubble: imagine the web without trolls, or shocks, or spam. Real-Time Language Translation With UK Developer’s Own Google-esque Augmented Reality Glasses. Real-time translation between an English and Spanish speaker is possible with DIY augmented reality glasses. 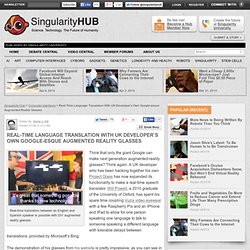 Think that only the giant Google can make next generation augmented-reality glasses? Think again. A UK developer who has been hacking together his own Project Glass has now expanded its functionality to make a real-time speech translator. Will Powell, a 2010 graduate of the University of Oxford, has spent his spare time coupling Vuzix video eyewear with a few Raspberry Pis and an iPhone and iPad to allow for one person speaking one language to talk to someone speaking a different language with tolerable delays between translations. provided by Microsoft’s Bing.

Back to the Tribe. Traditionally, technology is seen as a force that diminishes our instincts and puts us at a distance of nature. 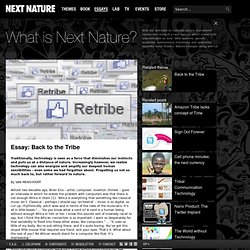 Increasingly however, we realize technology can also energize and amplify our deepest human sensibilities – even some we had forgotten about. Propelling us not so much back to, but rather forward to nature. By VAN MENSVOORT Almost two decades ago, Brian Eno – artist, composer, inventor, thinker – gave an interview in which he stated the problem with computers was that there is not enough Africa in them [1]. “Africa is everything that something like classical music isn’t. Trying out Meta's augmented reality glasses. What Will Human Cultures Be Like in 100 Years? 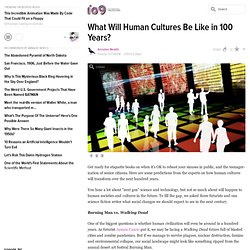 I think there's something to be said for looking at the whole of human culture, especially today with growing globalization. MTBS-TV: Interview With Meta at CES 2014. Microsoft's Real-Time Translation Software Converts English to Chinese—and Preserves the Sound of Your Voice. It could be the next best thing to learning a new language. 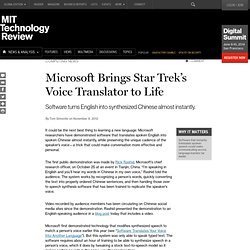 Microsoft researchers have demonstrated software that translates spoken English into spoken Chinese almost instantly, while preserving the unique cadence of the speaker’s voice—a trick that could make conversation more effective and personal. The first public demonstration was made by Rick Rashid, Microsoft’s chief research officer, on October 25 at an event in Tianjin, China. “I’m speaking in English and you’ll hear my words in Chinese in my own voice,” Rashid told the audience.

The system works by recognizing a person’s words, quickly converting the text into properly ordered Chinese sentences, and then handing those over to speech synthesis software that has been trained to replicate the speaker’s voice. Video recorded by audience members has been circulating on Chinese social media sites since the demonstration. Microsoft is not alone in looking to neural networks to improve speech recognition. Tribalism Returns as an Essential Tool of the Information Age.

It’s no secret that the internet has given us new ways to communicate. 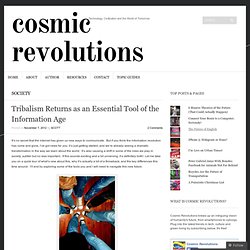 But if you think the information revolution has come and gone, I’ve got news for you: it’s just getting started, and we’re already seeing a dramatic transformation in the way we learn about the world. It’s also causing a shift in some of the roles we play in society, subtler but no less important. If this sounds exciting and a bit unnerving, it’s definitely both! Let me take you on a quick tour of what’s new about this, why it’s actually a bit of a throwback, and the key differences this time around. Meta Pro Augmented Reality Glasses. How GPS satellites will become our spacebound eyes in the near future.

SExpand This year, the Global Positioning System marks its 30th anniversary of being freely accessible to the public. 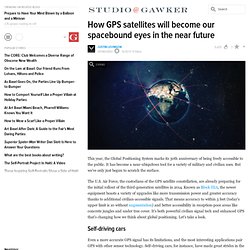 It has become a near-ubiquitous tool for a variety of military and civilian uses. But we’ve only just begun to scratch the surface. The U.S. Air Force, the custodians of the GPS satellite constellation, are already preparing for the initial rollout of the third-generation satellites in 2014. Self-driving cars Even a more accurate GPS signal has its limitations, and the most interesting applications pair GPS with other sensor technology. Indoor navigation For urban dwellers, the next step to cover is indoor navigation. Currently, indoor navigation relies on a variety of hacks using other sensors built into the smartphones we usually have in our pockets. Google Glass Pros: Positive Features of Camera-Embedded Sunglasses.

The arrival of Google Glass did not surprise everyone. 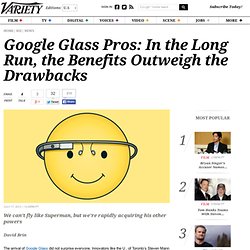 Innovators like the U . of Toronto’s Steven Mann spent two decades making wearable computerized visual overlays — or “specs” — more compact and effective, till at last Google deemed the technology ready. SEE MORE: From the July 16, 2013 issue of Variety Augmented reality, or AR, has been explored in fiction since the 1980s by authors Vernor Vinge, William Gibson, Neal Stephenson and in my own novel “Earth,” portraying a near future when citizens will take it as a routine element of life.

The path to your destination might be viewed as yellow bricks that are visible only to you. At command, you’ll access public knowledge about any building. Are There Internet Dialects? 25 Insane Subcultures You Won't Believe Actually Exist.