Augmented Reality for Learning. Augmented Reality (AR) can be defined as “a real-time direct or indirect view of a physical real-world environment that has been enhanced/augmented by adding virtual computer-generated information to it” (Carmigniani & Furht, 2011, p.3). 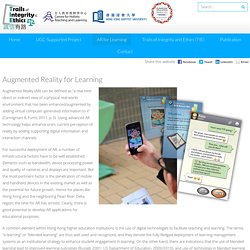 Using advanced AR technology helps enhance one’s current perception of reality by adding supporting digital information and interaction channels. For successful deployment of AR, a number of infrastructural factors have to be well established. Elements such as bandwidth, device processing power and quality of cameras and displays are important. But the most pertinent factor is the penetration of mobile and handheld devices in the existing market as well as the potential for future growth. Hence for places like Hong Kong and the neighboring Pearl River Delta region, the time for AR has arrived. A common element within Hong Kong higher education institutions is the use of digital technologies to facilitate teaching and learning.

References: Garrison, D. 9 Amazing Augmented Reality Apps for Teaching and Learning. Augmented reality (AR) has evolved in recent years and its application in classrooms is limitless. 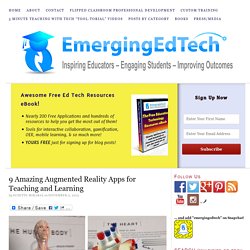 Educators don’t need to feel overwhelmed when trying to introduce AR in their classroom because there are many great apps that don’t require a lot of knowledge in the field. There are useful apps for every subject and there are also apps that when a teacher is ready they can create their own AR targets. Enhancing Student Learning with Augmented Reality.

Augmented Reality Brings Interactive Learning to Classroom. The world is at a pinnacle moment of the Information Era, known as the New Media Age. 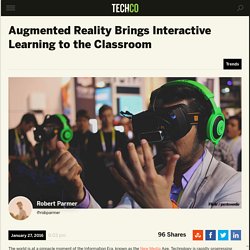 Technology is rapidly progressing at such a rate that many ideas still seem to be that of science fiction. On the roads, cars are literally driving themselves. Innovative teaching through technology - Raconteur. With the rapid development of virtual and augmented reality, particularly in gaming, it’s only a matter of time before this technology is harnessed and fully implemented into the education and training market. 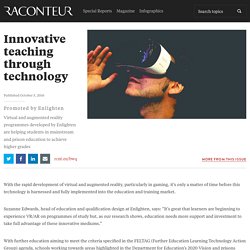 Suzanne Edwards, head of education and qualification design at Enlighten, says: “It’s great that learners are beginning to experience VR/AR on programmes of study but, as our research shows, education needs more support and investment to take full advantage of these innovative mediums.” With further education aiming to meet the criteria specified in the FELTAG (Further Education Learning Technology Action Group) agenda, schools working towards areas highlighted in the Department for Education’s 2020 Vision and prisons needing to address areas in the Unlocking Potential document, Enlighten have noticed a huge growth in demand for their quality eLearning services.

Imagine living in the magical world of Harry Potter, where the school hallways are lined with paintings that are alive and interactive. Now imagine creating an atmosphere like that for your students. Augmented Reality (AR) allows educators and students to do just that: unlock or create layers of digital information on top of the physical world that can be viewed through an Android or iOS device. Most people who interact with AR for the first time have a mind-blowing experience but fail to consider classroom applications.

In our elementary school classrooms, we use AR to create active learning experiences hitherto inconceivable, and in the process redefine the learning space! Classroom Applications Not Just Another Fad. Virtual Reality And Augmented Reality In Education - eLearning Industry. Did you know that an Egyptian temple can be recreated in a 3D environment and that it is possible to walk through it as a true surround environment without leaving the classroom? 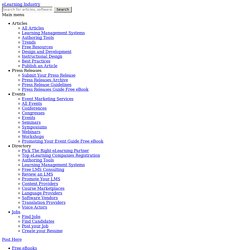 Or view on your screen a complete Roman house, with all its rooms, and move its figure to see all its views; Watching oneself attired as a Roman centurion, while all the drapery accompanies your movements; moving to anywhere in the world and feel its temperature and odors; stroll along the ocean floor surrounded by cephalopods or watching a complete heart beating in the middle of a classroom... These are just some of the possibilities that technologies offer to the world of education. It has already ceased to be science fiction and is entirely feasible if you have the appropriate devices. Virtual Reality Virtual reality glasses inMediaStudio has created the Immersive Worlds project, which implements the method of immersive learning.

"Then we have this prototype, that we call 'Tele Transport Booth'", David says. 5 reasons to use Augmented Reality in Education - Augment News. By integrating augmented reality into your lectures, you’ll capture the attention of your audience. 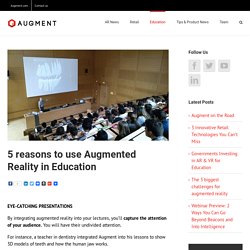 You will have their undivided attention. For instance, a teacher in dentistry integrated Augment into his lessons to show 3D models of teeth and how the human jaw works. Let your audience participate! Students are able to access models on their own devices via Augment’s app. By viewing augmented models, the students can gain a better understanding of the concepts they are studying. Prototypes, physical models, and detailed illustrations and posters are all extremely expensive. With Augment, you do not have to invest in physical materials. Augmented Reality For Education. EN103 web. Ar edu. How Augmented Reality Works. Video games have been entertaining us for nearly 30 years, ever since Pong was introduced to arcades in the early 1970s. 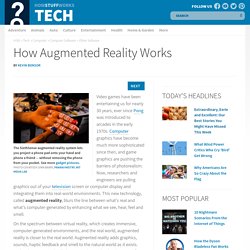 Computer graphics have become much more sophisticated since then, and game graphics are pushing the barriers of photorealism. Now, researchers and engineers are pulling graphics out of your television screen or computer display and integrating them into real-world environments. This new technology, called augmented reality, blurs the line between what's real and what's computer-generated by enhancing what we see, hear, feel and smell. On the spectrum between virtual reality, which creates immersive, computer-generated environments, and the real world, augmented reality is closer to the real world. Augmented reality adds graphics, sounds, haptic feedback and smell to the natural world as it exists. Augmented reality is changing the way we view the world -- or at least the way its users see the world. Augmented Reality.