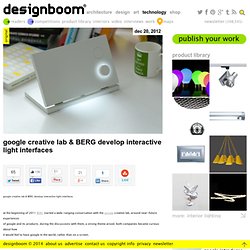 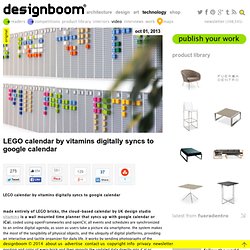 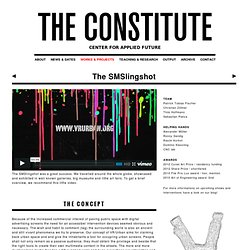 We travelled around the whole globe, showcased and exhibited in well known galleries, big museums and little art fairs. To get a brief overview, we recommend this little video. Because of the increased commercial interest of paving public space with digital advertising screens the need for an accessibel intervention devices seemed obvious and necessary. The wish and habit to comment (tag) the surrounding world is also an ancient and still vivant phenomena we try to preserve. Skintimacy, entre perception et intimité. Detours: Disney researchers turn houseplants into theremin. Augmented Reality Glove Lets You Use Your iPad Without Touching It. What if you could reach into your iPad and move around the objects on the screen with your hand? 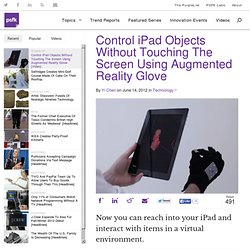 Now you can do just that with the T(ether), an augmented reality glove that allows wearers to create virtual environments on the tablet with simple hand gestures. Users can manipulate the objects on the screen, such as picking them up, dropping them down, pushing them aside, or creating a new object by tracing the shape’s outline. Microsoft Augmented Reality Concept Fuses Virtual World with Reality. Microsoft researchers have created a new augmented reality concept by improving how virtual simulations react in the physical world. 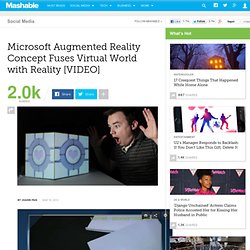 The Kinect sensor is used in a process called Kinect Fusion, which allows projections of objects to react to different surfaces. Kinect Fusion is possible with the Beamatron — a device consisting of the Kinect sensor and a projector. It's attached to a spinning head in the ceiling and allows it to take detailed maps of physical spaces. This technology projects objects anywhere in a room and allows realistic movement. These Guys Turned A Rock Climbing Wall Into A Big Video Game. Indoor rock climbing is a pretty excellent sport. 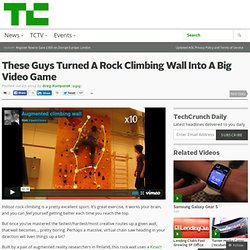 It’s great exercise, it works your brain, and you can feel yourself getting better each time you reach the top. But once you’ve mastered the fastest/hardest/most creative routes up a given wall, that wall becomes… pretty boring. Perhaps a massive, virtual chain saw heading in your direction will liven things up a bit? SimX Brings Augmented Reality to the Medical Field - TechCrunch Disrupt. Street-art. Murmur. Murmur is an architectural prosthesis that enables the communication between passers-by and the wall upon which it is connected.The installation simulates the movement of sound waves, building a luminous bridge between the physical and the virtual worlds. 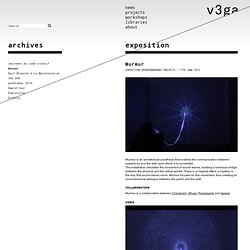 There is a magical effect, a mystery in the way that sound waves move. Murmur focuses on this movement, thus creating an unconventional dialogue between the public and the wall. Collaboration Murmur is a collaboration between Chevalvert, 2Roqs, Polygraphik and Splank. Video. Augmented Structures / Frequency. Augmented bubbles as shadows projected on the wall. Keyfleas - Interactive augmented projection by Miles Peyton (@mlsptn) Created by Miles Peyton, first year student at the Carnegie Mellon University, Keyfleas is an experiment in interactive augmented projection. 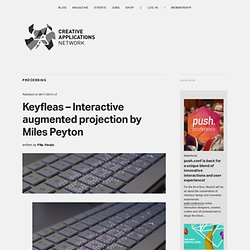 Inspired by the work of Chris Sugrue where light bugs crawl out of the screen and onto the viewer’s hand, Miles has used Processing and Box2D to create an augmented projection on the keyboard. As the user types, the “fleas” swarm around the pressed key, avoiding the letters. Miles describes the experience as “It’s okay if you feel something nibbling at your fingers.” 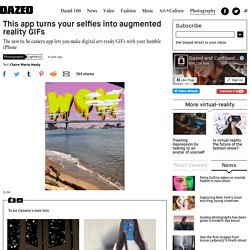 Described as an "augmented reality camera", the free-to-download app lets you record video GIFs and layer colourful visual layers on top of the image. It's already built a steady following from its New York launchpad, where it was first conceived by internet collage community to.be, which has close connects with other digital collectives like DIS and #BeenTrill#. "We were missing tools to gather pieces from our physical surroundings – like pencils and stones that you might have laying on your desk, or drawings that you make on paper," to.be co-founder Nick Dangerfield told us. The resulting GIFs aren't too dissimilar from a digital video artwork you might see in an art gallery – blending the real with the unreal, sea waves wash over suburban cul-de-sacs, and blissfully unaware babies glitter like gold. 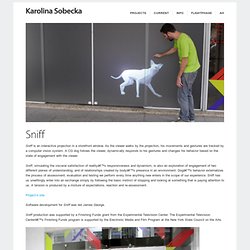 As the viewer walks by the projection, his movements and gestures are tracked by a computer vision system. A CG dog follows the viewer, dynamically responds to his gestures and changes his behavior based on the state of engagement with the viewer. Sniff, simulating the visceral satisfaction of realityâ€™s responsiveness and dynamism, is also an exploration of engagement of two different planes of understanding, and of relationships created by bodyâ€™s presence in an environment. All the Universe is Full of the Lives of Perfect Creatures. In this interactive mirror, viewer’s movement and expressions are mimicked by an animal head which is overlaid on the viewer’s reflection. The resulting effect invites inquiry into issues of self-awareness, empathy and non-verbal communication. A different animal appears every time a person walks in front of the mirror.

ColAR augmented reality colouring book. Apr 02, 2012 colAR augmented reality colouring book the ‘colAR’ application turns colouring book pages into custom 2D and 3D animationsleft: blank colouring book page, © bruce mahalski right: animation of coloured-in kiwi, © tech media network developed by the human interface technology lab new zealand (HITlabNZ), ‘colAR‘ is a computer program that transforms colouring book pages into animated 3D models. the project features a series of mini-applications, each dedicated to a particular colouring book whose printable pages are downloaded alongside the program. children and other users colour in the pages normally, but can then scan their work with a web camera. upon focusing in on a recognizable page, the program features an animated version of the coloured-in characters onscreen. the 3D scene can be rotated to be viewed from different angles. the developing team is comprised of adrian clark, andreas duenser, elwin lee, katy bang, and gabriel salas.

EyeRing. Digital Airbrush. MAS S65: Science Fiction to Science Fabrication. Sensory fiction is about new ways of experiencing and creating stories. Traditionally, fiction creates and induces emotions and empathy through words and images. By using a combination of networked sensors and actuators, the Sensory Fiction author is provided with new means of conveying plot, mood, and emotion while still allowing space for the reader’s imagination. These tools can be wielded to create an immersive storytelling experience tailored to the reader. Pepsi brings packaging to life with augmented reality. Jaguar Concept Windshield Shows Off Augmented Reality in the Car. Land Rover's New Invention Lets You See Through Your Car's Hood. This Augmented-Reality Sandbox Turns Dirt Into a UI.