How AR Will Change The Way We Live. In 1945, The Atlantic Monthly published an article by the American inventor Vannevar Bush. 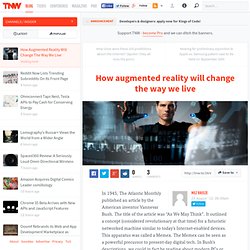 The title of the article was “As We May Think”. It outlined a concept (considered revolutionary at that time) for a futuristic networked machine similar to today’s Internet-enabled devices. This apparatus was called a Memex. The Memex can be seen as a powerful precursor to present-day digital tech. In Bush’s descriptions, we could in fact be reading about modern PCs or tablets: Consider a future device for individual use, which is a sort of mechanized private file and library…A memex is a device in which an individual stores all his books, records, and communications, and which is mechanized so that it may be consulted with exceeding speed and flexibility.

Vannevar Bush foreshadowed the impact that such technology would have on our contemporary lives. Past Events - Sense and the City - London Transport Museum. Date: VariousLove it or hate it, emerging technologies are transforming the way we live, work and play in our cities. 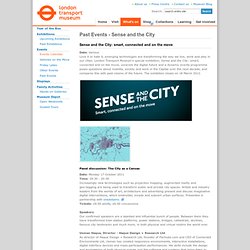 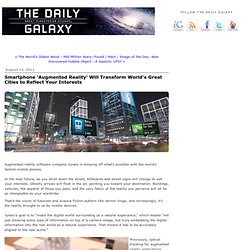 In the near future, as you stroll down the street, billboards and street signs will change to suit your interests. Ghostly arrows will float in the air, pointing you toward your destination. Augmented Reality Is Finally Getting Real. In the summer of 2009, Yelp quietly added a feature to its iPhone app that blurred the line between the real and the virtual. 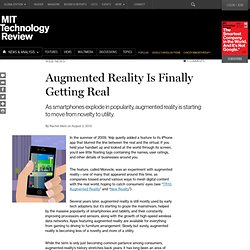 If you held your handset up and looked at the world through its screen, you’d see little floating tags containing the names, user ratings, and other details of businesses around you. The feature, called Monocle, was an experiment with augmented reality—one of many that appeared around this time, as companies tossed around various ways to mesh digital content with the real world, hoping to catch consumers’ eyes (see “TR10: Augmented Reality” and “New Reality”). Several years later, augmented reality is still mostly used by early tech adopters, but it’s starting to graze the mainstream, helped by the massive popularity of smartphones and tablets, and their constantly improving processors and sensors, along with the growth of high-speed wireless data networks.

So far, nearly 500,000 people have downloaded the Android app since it was released late last year. Marketing feature: ‘Contextual’ apps are changing the mobile landscape. Given the power packed in today’s smartphones, it’s no surprise that app usage is exploding. 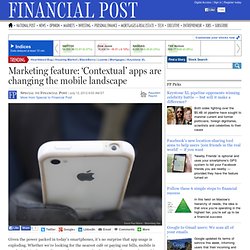 Whether we’re looking for the nearest café or paying our bills, mobile is revolutionizing how we live. But the current technology is just the start of something much bigger. A second-generation wave of “contextual” apps are destined to change the mobile landscape. These will be apps that can determine where we are and what we’re looking at and present us with a veritable library of pictures and information about that spot. Other apps that know what we like — say, a brand of shoes or a sport — will indicate where we can find them based on our co-ordinates, time of day and any other factor that might come into play. Whether it’s all about business or just for fun, the true test of any mobile app is its usefulness over time. Flash forward and the numbers will just keep getting bigger, researchers say. But cumulative downloads do not an app success story make. 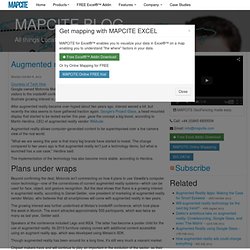 After augmented reality became over-hyped about two years ago, interest waned a bit, but recently the idea seems to have gathered traction again. Google's Project Glass, a head-mounted display that started to be tested earlier this year, gave the concept a big boost, according to Martin Herdina, CEO of augmented reality vendor Wikitude. Augmented reality allows computer-generated content to be superimposed over a live camera view of the real world. "What we are seeing this year is that many big brands have started to invest. The implementation of the technology has also become more stable, according to Herdina. Plans under wraps Speakers at the conference included Lego and IKEA.

No More City Limits. Once used as a means of escape from the real world, virtual reality is increasingly dictating what’s happening in it. John Brandon reports Even as urban theorists argue over which city is the world’ largest – Chongqing? Karachi? Tokyo? – there is one social nexus that has quietly and undisputedly overtaken them all. The internet supplies Facebook’s infrastructural guts; its information-sharing plumbing is built atop of Google’s search algorithms. However, this isn’t just virtual reality; the real and virtual urban worlds are increasingly interacting witheach other, of course. Indeed, it is hard to imagine how the continued emergence of megacities and giant border-busting urban corridors would be possible without the internet’s connective tissue.

During a recent TED talk given by internet pioneer Tim Berners-Lee, he described how the concept of “open source” mash-ups for all data would allow anyone to build complex maps using freely available data.