Academy. Introduction to VR/AR in education. MakeVR™  3D Modeling and Printing for Everyone Today, 3D printing is available to everyone through relatively inexpensive printers or through printing services like Shapeways. 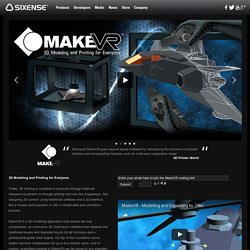 But designing 3D content using traditional software and a 2D interface, like a mouse and keyboard, is still a complicated and unintuitive process. MakeVR is a 3D modeling application built around two key components: an innovative 3D multi-touch interface that replaces the traditional mouse and keyboard inputs for all functions and a professional-grade CAD engine.

On top of this foundation we’ve added real-time collaboration for up to five remote users. And of course, everything created in MakeVR can be saved in any standard 3D printing format, then, with a click of a button, sent to either a local 3D printer or to a 3D printing service like Shapeways. 3D Multi-Touch MakeVR’s unprecedented ease-of-use is enabled by a 3D input technology that can track the exact position and orientation of each hand at all times. Lytro Immerge. ZEISS VR One. GoPro Official Website - Capture + share your world. Goblin VR. Project Memento. IkeGPS. Sciencestore @ Permex Ltd Optical Components. Cardboard_design_v1.0. Home - Draw & Code. The Structure Sensor is the first 3D sensor for mobile devices. Head Mounted Display. Disney Research HideOut augmented reality story books. 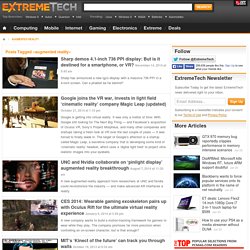 It was only a matter of time: With Google still looking for The Next Big Thing — and Facebook’s acquisition of Oculus VR, Sony’s Project Morpheus, and many other companies and startups taking a fresh look at VR over the last couple of years — it was forced to finally wade in. The target of Google’s affection is a startup called Magic Leap, a secretive company that is developing some kind of ‘cinematic reality’ headset, which uses a ‘digital light field’ to project ultra-realistic images into your eyeballs.

MIT’s ‘Kinect of the future’ can track you through walls October 18, 2013 at 9:33 amResearchers from MIT have unveiled a new form of motion tracking that uses a three-point system to follow a person’s position, even through a totally opaque wall. Mac & PC Motion Controller for Games, Design, & More. Official Site. Magic Leap. We know what you're thinking: "Who the heck are we? 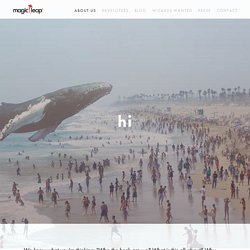 What is this all about? Why aren't you saying more? " And you're right, we need to say a little more about what it is we're creating. So what is Magic Leap? Magic Leap is an idea. An idea that computing should be shaped and forged to work for us: our life, our physiology, our connected relationships. It's an idea based in the belief that people should not have to choose between technology or safety, technology or privacy, the virtual world or the real world. This belief was born from two simple observations: That current technologies we use to access the digital world limit, or even take us away, from the real world. 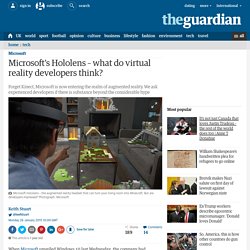 This was the Hololens, a stand-alone augmented reality heardset, capable of projecting computer generated objected into your real-world environment. Look through its futuristic screen, and you may see a dinosaur on your coffee table, or a monster on your sofa. The device seemingly uses an array of motion senses, as well as a Kinect-style camera so that it knows where the wearer is in the room, and can also recognise objects. Imagine, for example, a horror game where a zombie could crash through your own living room window. Add in both gesture and voice controls, and you have both a compelling alternative to fully immersive virtual reality headsets like Oculus Rift and Sony’s Project Morpheus, and the Magic Leap augmented reality headset that counts Google among its many excited investors.