How to camouflage yourself from facial recognition technology 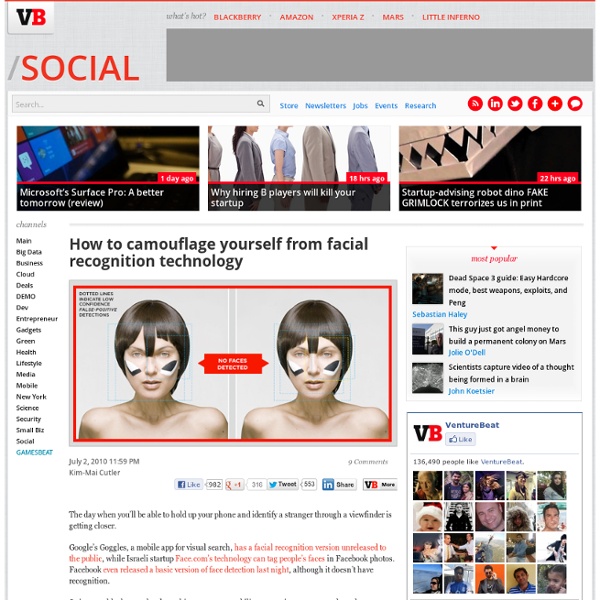 The day when you’ll be able to hold up your phone and identify a stranger through a viewfinder is getting closer. Google’s Goggles, a mobile app for visual search, has a facial recognition version unreleased to the public, while Israeli startup Face.com’s technology can tag people’s faces in Facebook photos. Facebook even released a basic version of face detection last night, although it doesn’t have recognition. So in a world where technology chips away at our ability to remain anonymous, how does one reclaim some semblance of control? It turns out there’s actually a pretty simple way around the facial recognition technology available in the market today, according to Adam Harvey, a graduate student at NYU’s ITP (the same program that produced Foursquare chief executive Dennis Crowley and that Twitter’s location guru Raffi Krikorian taught at). “It breaks apart the gestalt of the face,” he said. Harvey says there a couple of projects that could stem from idea.

Insurgents Intercept Drone Video in King-Size Security Breach (Updated, with Video) | Danger Room In Iraq and Afghanistan, the U.S. military depends on an array of drones to snoop on and stalk insurgents. Now it looks as if insurgents are tapping into those same drones’ broadcasts, to see what the flying robot spies see. If true — and widespread — it’s potentially one of the most serious military security breaches in years. “U.S. military personnel in Iraq discovered the problem late last year when they apprehended a Shiite militant whose laptop contained files of intercepted drone video feeds,” Wall Street Journal reports. How’d the militants manage to get access to such secret data? Using cheap, downloadable programs like SkyGrabber, militants were apparently able to watch and record the video feed — and potentially be tipped off when U.S. and coalition forces are stalking them. And here’s the real scandal: Military officials have known about this potential vulnerability since the Bosnia campaign. UPDATE: Check out this 2002 video from CBS, catching the intercept in the act…

THE EXILED User Interface Design Framework | Huge GUI elements library for Illustrator | 290 free vectors icons Graphic styles Library 200 graphic styles to change buttons, headers or blocks in 1 click Minimal Vector Icons 260 Vector Icons for creatingWireframes and Webdesign GUI Elements Library Hundreds of vector elementsfor designing Interfaces 1973 NSA cryptography lectures For those with an interest in cryptography, and secure communication generally, a series of recently declassified lectures from the American National Security Agency are well worth reading. The moderately-to-heavily redacted documents from 1973 cover a number of engaging subjects. The first volume covers the importance and practicalities of secure communications, codes, one time pads, encryption systems for voice communication, various bits of specific American communication equipment, TEMPEST attacks (described as “the most serious technical security problem [the NSA] currently face[s] in the COMSEC world”), and more. The second volume includes lecture on operational security, issues around the number of sending and receiving stations, public (commercial) cryptography, the destruction of cryptographic equipment in emergency situations, and more. Originally classified Secret and ‘No Foreign,’ the lectures are well written, engaging, and illuminating. Report a typo or inaccuracy

Developments in Facial Recognition Eventually, it will work. You'll be able to wear a camera that will automatically recognize someone walking towards you, and a earpiece that will relay who that person is and maybe something about him. None of the technologies required to make this work are hard; it's just a matter of getting the error rate down low enough for it to be a useful system. The police want this sort of system. A small camera fitted to the glasses can capture 400 facial images per second and send them to a central computer database storing up to 13 million faces. In the future, this sort of thing won't be limited to the police. Of course, there are false positives -- as there are with any system like this. In Boston, someone erroneously had his driver's licence revoked: It turned out Gass was flagged because he looks like another driver, not because his image was being used to create a fake identity. IEEE Spectrum and The Economist have published similar articles.

Cocoia Blog Insurgents Hack U.S. Drones Statement from Jeremy Regarding His Plea Statement from Jeremy Regarding His Plea Today I pleaded guilty to one count of violating the Computer Fraud and Abuse Act. This was a very difficult decision. I hope this statement will explain my reasoning. I believe in the power of the truth. During the past 15 months I have been relatively quiet about the specifics of my case as I worked with my lawyers to review the discovery and figure out the best legal strategy. Now that I have pleaded guilty it is a relief to be able to say that I did work with Anonymous to hack Stratfor, among other websites. I have already spent 15 months in prison. I would like to thank all of my friends and supporters for their amazing and ongoing gestures of solidarity. Jeremy Hammond

When You Don’t Own Yourself In the short time that Social Roulette was active, 393 people pulled the trigger. Given the 1 in 6 odds, approximately 65 people should have had their accounts deleted. In fact, all 393 people survived. One side of Social Roulette is about discomfort with social networks, or ambivalence about digital identity. This manifested in the tweets and posts from people bashing Facebook or daring each other to play. A few weeks ago, on April 20th, I saw Friend Fracker , a piece from Harper Reed and Rafael Lozano-Hemmer developed during Rhizome’s 7 on 7 conference. In 2009 the Web 2.0 Suicide Machine and Seuppukoo gave you the chance to delete all your social network activity and your account. Deleting an account is one thing, but playing games with it is another. I started researching the process of Facebook profile deletion, but was dismayed to discover how difficult the process was. This made me feel like my information was hardly mine to delete by hand, much less in an automated way.