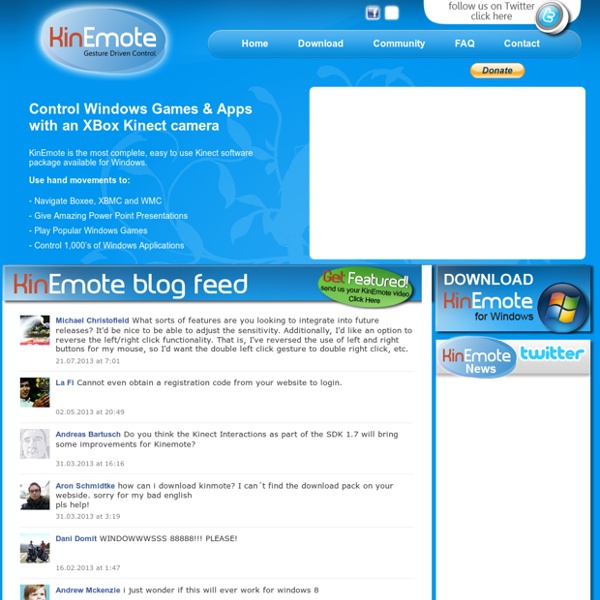 Kinect for Windows Software and Multitouch Monitors The Khronos Group Inc. Kinect PowerPoint Control Trackmate 1. Print Tags Trackmate uses a small, specially designed circular barcode that stores information which can be easily decoded by the Trackmate Tracker. 2. There are a lot of different ways that you can build a Trackmate system. 3. The Trackmate Tracker reads Trackmate tags (by processing images from a webcam) and then sends the corresponding data to any spatial application via LusidOSC. 4. Trackmate sends object data via LusidOSC (a protocol layer for unique spatial input devices), allowing any LusidOSC-based application to work with the system.

MinGW | Minimalist GNU for Windows Why Do We Need Limits and Infinitesimals? So many math courses jump into limits, infinitesimals and Very Small Numbers (TM) without any context. But why do we care? Math helps us model the world. But, we want an accurate model. The tricky part is making a decent model. The Paradox of Zero Breaking a curve into rectangles has a problem: How do we get slices so thin we don’t notice them, but large enough to “exist”? If the slices are too small to notice (zero width), then the model appears identical to the original shape (we don’t see any rectangles!). If the slices are tiny but measurable, the illusion vanishes. We want the best of both: slices so thin we can’t see them (for an accurate model) and slices thick enough to create a simpler, easier-to-analyze model. The Solution: Zero is Relative The notion of zero is biased by our expectations. Well, “i” sure looks like zero when we’re on the real number line: the “real part” of i, Re(i), is indeed 0. You see, there are two answers (so far!) Overview of Limits & Infinitesimals Summary

Hugin - Panorama photo stitcher Why Some People See Sound | Flash Illusions Some people may actually see sounds, say researchers who found this odd ability is possible when the parts of the brain devoted to vision are small. These findings points to a clever strategy the brain might use when vision is unreliable, investigators added. Scientists took a closer look at the sound-induced flash illusion. When a single flash is followed by two bleeps, people sometimes also see two illusory consecutive flashes. Past experiments revealed there are strong differences between individuals when it comes to how prone they are to this illusion. These differences suggested to de Haas and his colleagues that maybe variations in brain anatomy were behind who saw the illusion and who did not. On average, the volunteers saw the illusion 62 percent of the time, although some saw it only 2 percent of the time while others saw it 100 percent of the time. "If we both look at the same thing, we would expect our perception to be identical," de Haas told LiveScience.

Revs Program at Stanford | Connecting the past, present and future of the automobile Main Page