Eye Am a Camera: Surveillance and Sousveillance in the Glassage. The following is a guest post by Professor Steve Mann. 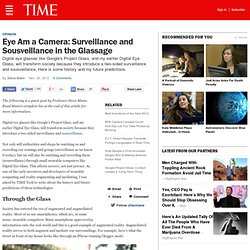 Read Mann’s complete bio at the end of this article for more information. Digital eye glasses like Google’s Project Glass, and my earlier Digital Eye Glass, will transform society because they introduce a two-sided surveillance and sousveillance. Not only will authorities and shops be watching us and recording our comings and goings (surveillance as we know it today), but we will also be watching and recording them (sousveillance) through small wearable computers like Digital Eye Glass. This affects secrecy, not just privacy. As one of the early inventors and developers of wearable computing and reality augmenting and mediating, I was asked by TIME Tech to write about the history and future predictions of these technologies. 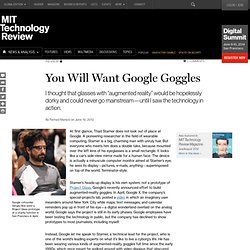 A pioneering researcher in the field of wearable computing, Starner is a big, charming man with unruly hair. But everyone who meets him does a double take, because mounted over the left lens of his eyeglasses is a small rectangle. It looks like a car’s side-view mirror made for a human face. The device is actually a minuscule computer monitor aimed at Starner’s eye; he sees its display—pictures, e-mails, anything—superimposed on top of the world, Terminator-style.

Starner’s heads-up display is his own system, not a prototype of Project Glass, Google’s recently announced effort to build augmented-reality goggles. Instead, Google let me speak to Starner, a technical lead for the project, who is one of the world’s leading experts on what it’s like to live a cyborg’s life. But as soon as Starner walked into the colorful Google conference room where we met, I began to question my skepticism. Project Glass: One day... Google Glasses: A New Way to Hurt Yourself (parody of Google's Project Glass) Are we headed for a smartphone zombie apocalypse? Even the undead have to text sometimes. iReporter Anita Cassini shot photos of an October 2011 zombie walk in New York. 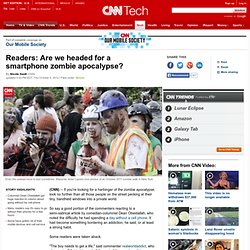 Columnist Dean Obeidallah got huge reaction to column about going without his cell phoneMany readers say it's easy to go without their phones for a few hoursSome have gotten rid of their mobile devices and cell service (CNN) -- If you're looking for a harbinger of the zombie apocalypse, look no further than all those people on the street pecking at their tiny, handheld windows into a private world.

So say a good portion of the commenters reacting to a semi-satirical article by comedian-columnist Dean Obeidallah, who noted the difficulty he had spending a day without a cell phone. It had become something bordering an addiction, he said, or at least a strong habit. Smartphone of the future will be in your brain. In 5 years: After the Patent Wars in which Apple emerged victorious, rivals embrace triangular forms. 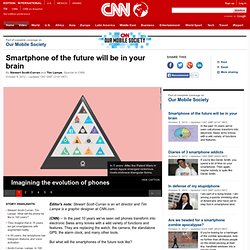 In 15 years: Smartphones evolve into Smartglasses, which provide a constant stream of content and advertisement directly into the user's field of vision. In 25 years: Extreme miniaturization turns phones into single use, disposable devices. Sight. TAT augmented ID. Use It Better: Four Augmented-Reality Apps That Don't Exist but Should. In my Scientific American column this month, I wrote about the dawn of augmented-reality software: phone apps that overlay informational graphics on a live video view of the world. 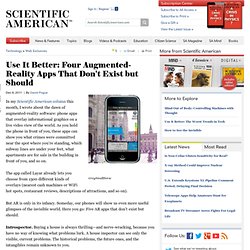 As you hold the phone in front of you, these apps can show you what crimes were committed near the spot where you’re standing, which subway lines are under your feet, what apartments are for sale in the building in front of you, and so on. The app called Layar already lets you choose from 1500 different kinds of overlays (nearest cash machines or WiFi hot spots, restaurant reviews, descriptions of attractions, and so on). But AR is only in its infancy. Someday, our phones will show us even more useful glimpses of the invisible world. Here you go: Five AR apps that don’t exist but should. Introspector.

As you tour the house you’re considering, this app identifies the far less visible sources of expensive grief. FluBugger. Kitchen Spy. Porthole in the Floor. Insufficient Dater. Predictions for Augmented Reality Law in 2012.