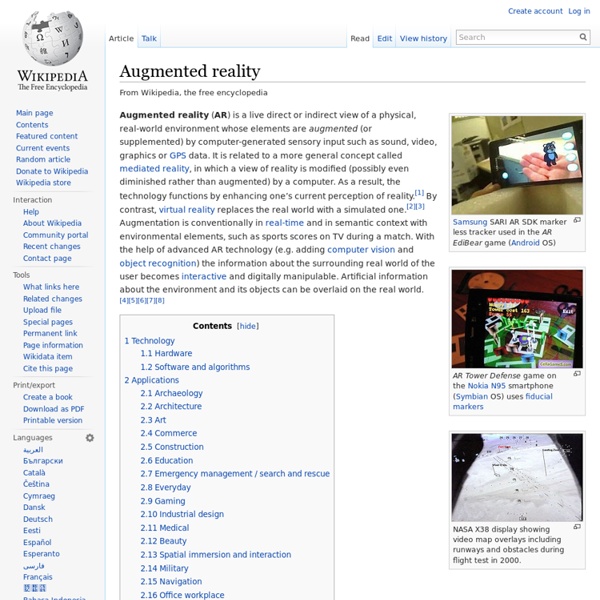 NASA X38 display showing video map overlays including runways and obstacles during flight test in 2000. Augmented reality (AR) is a live direct or indirect view of a physical, real-world environment whose elements are augmented (or supplemented) by computer-generated sensory input such as sound, video, graphics or GPS data. It is related to a more general concept called mediated reality, in which a view of reality is modified (possibly even diminished rather than augmented) by a computer. As a result, the technology functions by enhancing one’s current perception of reality.[1] By contrast, virtual reality replaces the real world with a simulated one.[2][3] Augmentation is conventionally in real-time and in semantic context with environmental elements, such as sports scores on TV during a match. Technology[edit] Hardware[edit] Hardware components for augmented reality are: processor, display, sensors and input devices. Display[edit] Head-mounted[edit] Eyeglasses[edit] HUD[edit] EyeTap[edit]

How Augmented Reality Works Video games have been entertaining us for nearly 30 years, ever since Pong was introduced to arcades in the early 1970s. Computer graphics have become much more sophisticated since then, and game graphics are pushing the barriers of photorealism. Now, researchers and engineers are pulling graphics out of your television screen or computer display and integrating them into real-world environments. This new technology, called augmented reality, blurs the line between what's real and what's computer-generated by enhancing what we see, hear, feel and smell.

Computer-mediated reality Art installation illustrating the mediated reality concept. First we display what's really there, and then this allows a computer to be inserted into the "reality stream" to modify it. Mediated Reality application running on Apple iPhone Computer-mediated reality refers to the ability to add to, subtract information from, or otherwise manipulate one's perception of reality through the use of a wearable computer or hand-held device[1] such as a smart phone. Typically, it is the user's visual perception of the environment that is mediated. This is done through the use of some kind of electronic device, such as an EyeTap device or smart phone, which can act as a visual filter between the real world and what the user perceives.

What is augmented reality (AR)? - Definition from WhatIs.com Augmented reality is the integration of digital information with the user's environment in real time. Unlike virtual reality, which creates a totally artificial environment, augmented reality uses the existing environment and overlays new information on top of it. Boeing researcher Thomas Caudell coined the term augmented reality in 1990, to describe how the head-mounted displays that electricians used when assembling complicated wiring harnesses worked. To Receive Your Message, This App Makes You Travel to a Real Location Ephemeral messaging apps like Snapchat, while often fun, can sometimes make it seem as though the sender is trying to hide something (because, often, that's exactly the point). But what if there were a way to harness the same kind of fleeting messaging dynamic in way that used your location to give the message even more meaning long after the message has disappeared into the ether? That appears to the goal of a new app called Traces that allows you to leave a message for someone that they can only pick up by traveling to the message's geographic location.

Is Pokemon Go Finally Making Augmented Reality Mainstream? Until Pokemon Go became a viral phenomenon by amassing more than 100 million downloads in a few weeks, augmented reality was confined to tech types and sci-fi fiends. However, thanks to the game, many have now tried AR for the first time, as kids and adults alike roam through town catching digital monsters superimposed on a physical world. "I put this up there with the first time you saw the iPhone, the first time you saw the connectivity and relationship definition of Facebook," said Michael Koziol, president of Huge's office in Atlanta.

Virtual reality U.S. Navy personnel using a mock VR parachute trainer. Virtual Reality (VR), which can be referred to as immersive multimedia or computer-simulated life, replicates an environment that simulates physical presence in places in the real world or imagined worlds. ARToolKit ARToolKit is a computer tracking library for creation of strong augmented reality applications that overlay virtual imagery on the real world. To do this, it uses video tracking capabilities that calculate the real camera position and orientation relative to square physical markers in real time. Once the real camera position is known a virtual camera can be positioned at the same point and 3D computer graphics models drawn exactly overlaid on the real marker. So ARToolKit solves two of the key problems in Augmented Reality; viewpoint tracking and virtual object interaction. ARToolKit was originally developed by Hirokazu Kato of Nara Institute of Science and Technology in 1999[1] and was released by the University of Washington HIT Lab. Currently it is maintained as an opensource project hosted on SourceForge[2] with commercial licenses available from ARToolWorks.[3] ARToolKit is a very widely used AR tracking library with over 160,000 downloads since 2004.[4]

Pokémon Go Brings Augmented Reality to a Mass Audience Pokémon, a hybrid of the words “pocket” and “monsters,” belongs to the Pokémon Company, which is partly owned by Nintendo, the Japanese game pioneer, which has struggled to adapt to the era of gaming on mobile devices like smartphones and tablets. In the cartoon, Pokémon trainers use characters to battle each other for sport. The uptake of Pokémon Go, which is so far available only in the United States, Australia and New Zealand, has been so furious that it sent Nintendo’s market capitalization soaring $9 billion in the last few days.

When Will AR Replace the Fitting Room? We've been told the way we shop at our favorite stores is on the cusp of major and innovative change for years. Now we're seeing retailers incorporate interactive technology to give the traditional shopping experience a digital makeover. Activations from digital signage to iPads to interactive displays to augmented reality encourage shoppers to browse broader collections and try inventories on — without having to visit the dressing room. Baidu Releases Augmented Reality Platform As China’s largest search engine Baidu BIDU +6.34% searches for its next source of growth, the company is gaining an upper hand over domestic rivals in developing one futuristic technology: augmented reality. Despite augmented reality, or AR, taking the world by storm this summer with the smash hit mobile game Pokémon GO, the technology hasn’t gained much traction in China. Instead of experimenting with superimposing virtual items onto the real world, Chinese companies are focusing on making low-cost virtual reality headsets suited for gaming or movie watching, analysts say. “AR is far, far more complicated and expensive than VR,” says Zhang Weining, a professor who teaches a class on the internet of things at the Cheung Kong Graduate School of Business in Beijing.

Augmented Reality Simply Explained for Students June 18, 2014 The integration of Augmented Reality technology into learning is growing by leaps and bounds. The potential of this technology in education is uncontestedly huge and several classes now are using it to teach key literacy and mathematical concepts to students. This series of videos is an example of how students in primary are using augmented reality in their learning. Augmented reality should not be confused with virtual reality, for the boundaries of each concept are clearly demarcated.

The next big thing in tech: Augmented reality - CNET SANTA CLARA, Calif. -- Reality isn't what is used to be. With increasingly powerful technologies, the human universe is being reimagined way beyond Google Glass' photo-tapping and info cards floating in space above your eye. The future is fashionable eyewear, contact lenses or even bionic eyes with immersive 3D displays, conjuring up a digital layer to "augment" reality, enabling entire new classes of applications and user experiences. Like most technologies that eventually reach a mass market, augmented reality, or AR, has been gestating in university labs, as well as small companies focused on gaming and vertical applications, for nearly half a century. Emerging products like Google Glass and Oculus Rift's 3D virtual reality headset for immersive gaming are drawing attention to what could now be termed the "wearable revolution," but they barely scratch the surface of what's to come. But now augmented reality is about to break out into free space.