Building an Archive of ALL Documented Human Languages. - The Rosetta Project 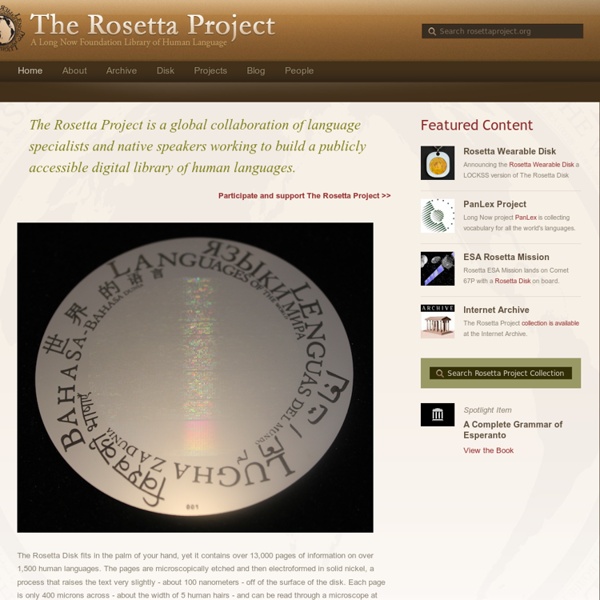 Participate and support The Rosetta Project >> The Rosetta Disk fits in the palm of your hand, yet it contains over 13,000 pages of information on over 1,500 human languages. The pages are microscopically etched and then electroformed in solid nickel, a process that raises the text very slightly - about 100 nanometers - off of the surface of the disk. Each page is only 400 microns across - about the width of 5 human hairs - and can be read through a microscope at 650X as clearly as you would from print in a book. Individual pages are visible at a much lower magnification of 100X. The outer ring of text reads "Languages of the World" in eight major world languages.

Martin Luther King I Have a Dream Speech - American Rhetoric Martin Luther King, Jr. I Have a Dream delivered 28 August 1963, at the Lincoln Memorial, Washington D.C. Video Purchase Off-Site audio mp3 of Address [AUTHENTICITY CERTIFIED: Text version below transcribed directly from audio. (2)] Middle East Maps Middle East Maps The PCL Map Collection includes more than 250,000 maps, yet less than 30% of the collection is currently online. A $5, $15, or $25 contribution will help us fund the cost of acquiring and digitizing more maps for free online access. Click the SUPPORT US button to make your contribution today!

9 Websites You Can Use to Learn a Foreign Language - StumbleUpon Traveling is a great way to see a country and learn about the people who live there. But if you really want to learn what makes them tick than you need to learn their language. Immersing yourself in a new language can seem like a daunting task. Fortunately, there are great free resources available to turn your first few words into fluency. BBC Languages

FASTEN SEAT BELTS 2 - Travel by Continent - Europe Fasten Seat Belts, a light hearted guide to avoid misunderstandings while travelling. An innovative way to learn languages and pick up cultural tips. Travel by Continent / Europe In the Netherlands, it is the custom on someone's birthday to... Gifts, Miscellaneous, Do's & Don'ts, Netherlands Media Standards Trust » Churnalism.com Churnalism.com is an independent, non-profit website built and run by the Media Standards Trust to help the public distinguish between original journalism and ‘churnalism’.‘Churnalism’ is a news article that is published as journalism, but is essentially a press release without much added. In his landmark book, Flat Earth News, Nick Davies wrote how ‘churnalism’ is produced by: “Journalists who are no longer gathering news but are reduced instead to passive processors of whatever material comes their way, churning out stories, whether real event or PR artifice, important or trivial, true or false” (p.59). According to the Cardiff University research that informed Davies’ book, 54% of news articles have some form of PR in them. The word ‘churnalism’ has been attributed to BBC journalist Waseem Zakir.

The Gulf/2000 Project - SIPA - COLUMBIA UNIVERSITY Maps and Statistics Collections All maps and their accompanying texts that are hosted by this Gulf/2000 web site are original, authored and produced by Dr. Michael Izady who retains exclusive copyright to them all. They are frequently upgraded by him as well as new ones being posted. 75 Free Language Learning Resources Online Whether you’re trying to learn English, Spanish, French, Portuguese, Japanese, Chinese, Italian –you get the picture – it’s good to get free help along the way. Luckily, there are tons of free online resources out there. Here are 75 to get you started … 1. 101Languages.net – Learn basics like vowels, consonants, phrases and vocabulary for various languages like Arabic, Bambara, Cebuano, Estonian, Icelandic, Latvian and Serbian.

The School of Life London Life’s too short for bad books – but with a new book published every 30 seconds, it can be hard to know where to start. That’s why The School of Life set up a bibliotherapy service: to guide you to those amazing but often elusive works of literature, both past and present, that have the power to enchant, enrich and inspire. In a consultation with one of our bibliotherapists, you'll explore your relationship with books so far and be asked to explore new literary directions. Perhaps you're looking for an author whose style you love so much you will want to devour every word they've ever written. Perhaps you’re about to trek across China and need to find ideal travel companions to download onto your kindle. Maybe you’re feeling disconnected from the world and want to listen to the classics of your childhood during your daily commute.

Language Hotspots In the 21st century our planet’s natural resources have become endangered. It is widely accepted that the biosphere—the sum total of the planet’s flora and fauna—is in great peril of collapsing as human populations make a massive impact on the natural world. But what is not widely known is that the human cultural “biosphere” —the sum total of all human cultures living on the planet today—is in even more peril. Over half of the 7,000 languages spoken in the world today are likely to disappear this century, and with them we will lose a wealth of knowledge about human history, culture, and the natural environment. Most of what humans know about nature is encoded only in oral languages—languages that have never been written down or recorded.

21 Digital Tools to Build Vocabulary l Dr. Kimberly's Literacy Blog If you follow this blog, you know that I believe effective vocabulary instruction is just about the most important instructional activity for teachers to get right. For lots of reasons. Vocabulary influences fluency, comprehension, and student achievement. How’s that for starters? In addition, a broad vocabulary is important for effective speaking, listening, reading and writing. Vocabulary is a foundational component of an effective K-12 comprehensive literacy framework.