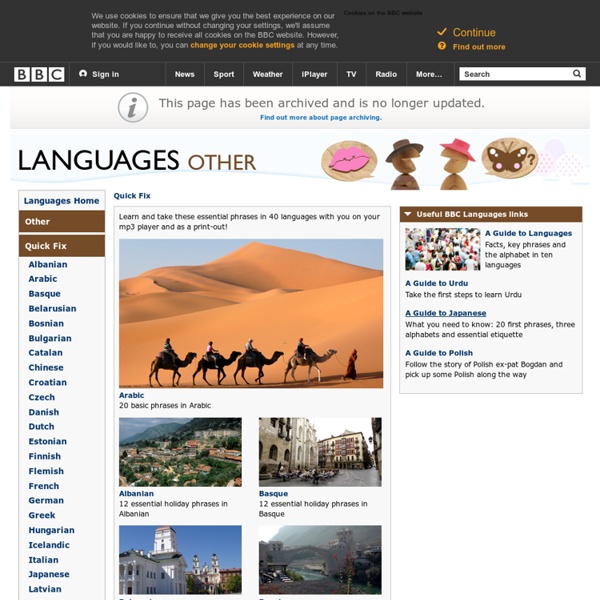 Immigration: Stories of Yesterday and Today and Ellis Island World War II and the Postwar Period The United States entered World War II in 1942. During the war, immigration decreased. There was fighting in Europe, transportation was interrupted, and the American consulates weren't open. Fewer than 10 percent of the immigration quotas from Europe were used from 1942 to 1945.In many ways, the country was still fearful of the influence of foreign-born people. The United States was fighting Germany, Italy, and Japan (also known as the Axis Powers), and the U.S. government decided it would detain certain resident aliens of those countries. Common French Phrases - LoveToKnow French When you live in a French-speaking environment for a substantial period of time, you begin to notice that there are some common French phrases that come back again and again. You'll hear these whether talking to a clerk at the post office or talking to a neighbor about absolutely anything under the sun. Not only will understanding these phrases help you get integrated into French daily life, but once you start using them in the right situations, you'll sound more and more native every day! Basic tourist French phrases are good for vacations, but integrating yourself into la francophonie (even if only for a week!) can be fun too.

Learn 48 Languages Online for Free How to learn languages for free? This collection features lessons in 48 languages, including Spanish, French, English, Mandarin, Italian, Russian and more. Download audio lessons to your computer or mp3 player and you’re good to go. Amharic Foreign Service Institute Basic Amharic – Audio – TextbookLessons with dialogues, drills, exercises, and narratives will teach you the basics of this language spoken in Ethiopia. Includes samples of speech, explanations of basic language structures, and a variety of practical exercises.

11 Ways to Find and View Panoramic Images Thanks to developments in camera and web technology it has become quite easy to capture panoramic imagery. Panoramic imagery provides viewers of a better sense of the view one experiences when standing in a location. For example, a panorama of the Grand Canyon is more informative than a standard image view.

VocalNationalAnthems Jana Gana Mana (Bengali: জন গণ মন, Jôno Gôno Mono) is the national anthem of India. Written in highly Sanskritized Bengali, it is the first of five stanzas of a Brahmo hymn composed and scored by Nobel laureate Rabindranath Tagore. It was first sung at the Calcutta Session of the Indian National Congress on 27 December 1911. Jana Gana Mana was officially adopted by the Constituent Assembly as the Indian national anthem on January 24, 1950. An earlier poem by Tagore (Amar Shonar Bangla) was later selected as the national anthem of Bangladesh. A formal rendition of the national anthem takes fifty-two seconds. Phrases in 5 common languages to know when traveling in Europe Traveling abroad this summer? These helpful phrases will open doors and help you gain immediate acceptance. You don't need to be fluent in the language of the country that you are traveling to, but learning some key phrases makes a great impression.

Visuals for Foreign Language Instruction The illustrations were created as part of the Visuals for Developing Communication Skills in Foreign Language Classes project, initated by Paul Toth, former Director of the Less-Commonly-Taught Languages Center. It was funded by the Provost through the Advisory Council on Instructional Excellence (ACIE) as part of the Innovation in Education Awards program, and brought to completion by Paul's successors, Dawn McCormick and David Quinto-Pozos. All of the illustrations were drawn by Alec Sarkas from the Center for Instructional Development & Distance Education (CIDDE). The project was managed by Nick Laudato and Bill Johnston from CIDDE. Search for an image… Browse the collection…

10 Words for Emotions You Didn’t Even Know You Had In recent years, neuroscience has introduced a new way of thinking about our emotions. The scientists behind the latest brain-imaging studies say they can now pinpoint with precision where these feelings are located within our heads. In 2013, for instance, a team of psychologists published a study in which they claimed that they had found neural correlates for nine very distinct human emotions: anger, disgust, envy, fear, happiness, lust, pride, sadness, and shame. This is an intriguing trend for academics like Tiffany Watt Smith, a research fellow at the Centre for the History of the Emotions at Queen Mary University of London. “It’s this idea that what we mean by ‘emotion’ has evolved,” Smith tells Science of Us. “It’s now a physical thing — you can see a location of it in the brain.”

All About Explorers Henry Hudson According to detailed records recently discovered in the archives of the Cork County Records Office in Ireland, Henry Hudson was born in room 441 of the Blarney Medical Center at 3:17 PM on Monday, August 13, 1593. He was a very well-educated man who attended the famous Harvard University. Hudson’s main goal as an explorer was to find a northern passage to the Orient. 100 French Food/Drink Words and Phrases It's Bastille Day! If only your 10th grade French teacher had taught you what you really need to know — impressing that special someone at the restaurant where you’re maxing out your credit card. Don’t let that stop you though, because what they say is true: France is a haven for food and wine enthusiasts of all levels, and French cuisine is a palate-expanding experience everyone should have. Try out some of my extensive choice vocabulary for avoiding snails, raw beef and frogs’ legs (although why would you want to?)