Your Guide to Languages on the Web 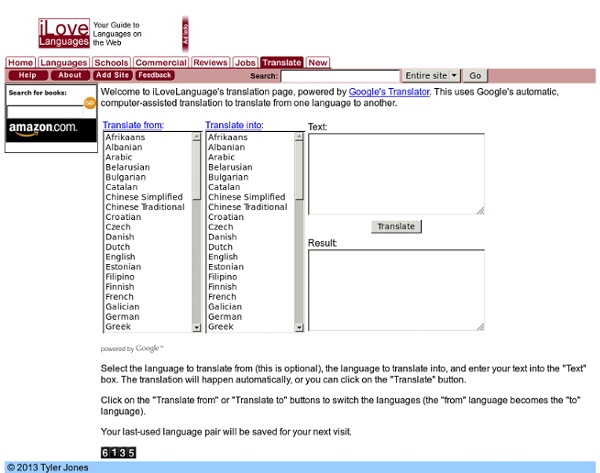 Languages of the world Building an Archive of ALL Documented Human Languages. - The Rosetta Project Artificial Intelligence Cracks 4,000-Year-Old Mystery | Wired Sc An ancient script that’s defied generations of archaeologists has yielded some of its secrets to artificially intelligent computers. Computational analysis of symbols used 4,000 years ago by a long-lost Indus Valley civilization suggests they represent a spoken language. Some frustrated linguists thought the symbols were merely pretty pictures. "The underlying grammatical structure seems similar to what’s found in many languages," said University of Washington computer scientist Rajesh Rao. The Indus script, used between 2,600 and 1,900 B.C. in what is now eastern Pakistan and northwest India, belonged to a civilization as sophisticated as its Mesopotamian and Egyptian contemporaries. However, it left fewer linguistic remains. In 1877, British archaeologist Alexander Cunningham hypothesized that the Indus script was a forerunner of modern-day Brahmic scripts, used from Central to Southeast Asia. The program calculated the level of order present in each language. Image: J.M. See Also:

21 Digital Tools to Build Vocabulary l Dr. Kimberly's Literacy Blog If you follow this blog, you know that I believe effective vocabulary instruction is just about the most important instructional activity for teachers to get right. For lots of reasons. Vocabulary influences fluency, comprehension, and student achievement. How’s that for starters? In addition, a broad vocabulary is important for effective speaking, listening, reading and writing. I write frequently about the importance of effective vocabulary instruction and my recent infographic – the 10 Do’s and Don’ts of Effective Vocabulary Instruction – has proved very popular having been Pinned over 31,000 times. In today’s 21st century classrooms, digital tools must coexist alongside more traditional tools. Digital tools have advantages. The following digital tools show promise to support word learning, review, and playing with language. 21 Digital Tools to Build Vocabulary Reference Tools 1. Lingro is a cool tool for both the “wow” factor and for its usefulness. 2. “Jetty” as defined by Shahi 3.

Conjuga-me - Conjugação de verbos regulares e irregulares Education Menu Education Create A Page! Education is so much more than just school. That's why there are thousands of people writing pages in this very popular neighborhood on Squidoo. Up Down Fresh Pages Latest Additions Top Performers Best of Education see more Topic Leaders Leading Lensmasters in Education Explore Copyright © 2014, Squidoo, LLC and respective copyright owners This page and all the pages on Squidoo generate income for lensmasters and charities based on affiliate relationships with our partners, including Amazon, Google, eBay and others.

Software Translates Your Voice into Another Language Researchers at Microsoft have made software that can learn the sound of your voice, and then use it to speak a language that you don’t. The system could be used to make language tutoring software more personal, or to make tools for travelers. In a demonstration at Microsoft’s Redmond, Washington, campus on Tuesday, Microsoft research scientist Frank Soong showed how his software could read out text in Spanish using the voice of his boss, Rick Rashid, who leads Microsoft’s research efforts. In a second demonstration, Soong used his software to grant Craig Mundie, Microsoft’s chief research and strategy officer, the ability to speak Mandarin. Hear Rick Rashid’s voice in his native language and then translated into several other languages: English: Spanish: Italian: Mandarin: In English, a synthetic version of Mundie’s voice welcomed the audience to an open day held by Microsoft Research, concluding, “With the help of this system, now I can speak Mandarin.”

Conjugaison de tous les verbes avec Le Conjugueur Enrollment in Online Classes Picks Up In Green Bay Area August 24th, 2012 By Jacqueline Foster, Editor Reflecting the increasing demand for online courses at colleges across the nation, colleges in the Green Bay area of Wisconsin are experiencing more demand for online classes and expanding their online offerings as a result. Northeast Wisconsin Technical College saw the percentage of students taking online classes rise from 13.26% during the 2007-2008 school year to 18% during the 2008-2009 school year, according to the Green Bay Press-Gazette. Over the past five years, NWTC has increased its number of online courses by 62%, the article explained. Other schools in the area, including University of Wisconsin-Green Bay and St. St. This increase of demand for online classes in the Green Bay area is a microcosm of the increasing demand taking place elsewhere in the nation.

Future - The secret “anti-languages” you’re not supposed to know Could you erectify a luxurimole flackoblots? Have you hidden your chocolate cake from Penelope? Or maybe you’re just going to vada the bona omi? If you understand any of these sentences, you speak an English “anti-language”. Thieves’ Cant, Polari, and Gobbledygook (yes, it’s a real form of slang) are just a few of the examples from the past – but anti-languages are mercurial beasts that are forever evolving into new and more vibrant forms. A modern anti-language could very well be spoken on the street outside your house. One of the first detailed records of an anti-language comes from a 16th Century magistrate called Thomas Harman. Byng we to Rome vyle to nyp a bounge, so shall we have lower for the bowsing ken – Thieves’ Cant As Green points out, many slang words concern our basest preoccupations. Yet the Thieves’ Cant also includes some intricacies that are not found in the informal language you or I speak. A “prigger of prancers”