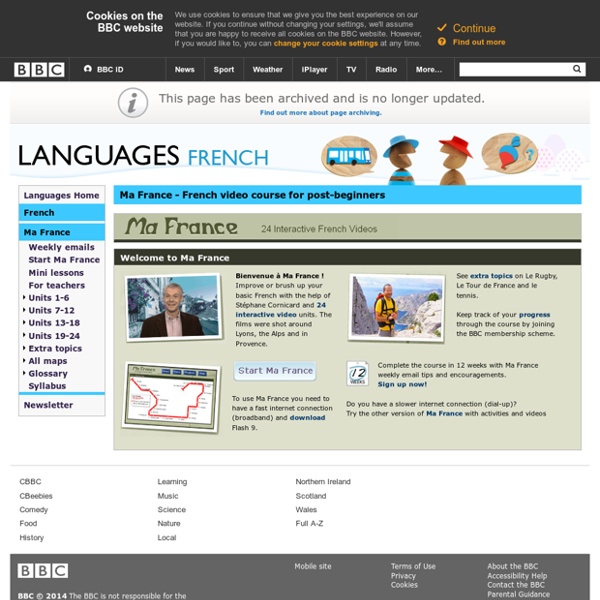 Bienvenue à Ma France ! Improve or brush up your basic French with the help of Stéphane Cornicard and 24 interactive video units. The films were shot around Lyons, the Alps and in Provence. See extra topics on Le Rugby, Le Tour de France and le tennis. Keep track of your progress through the course by joining the BBC membership scheme. To use Ma France you need to have a fast internet connection (broadband) and download Flash 9.

A Syllabus and Book List for Novice Students of Science Fiction Literature By Annalee Newitz, io9 Want to start reading some science fiction, but aren't sure where to begin? We've put together an introductory sci-fi lit syllabus just for you.SF 101: Introduction to Literature SyllabusWhat This List Is and Isn'tThere are a few things to keep in mind about this syllabus for SF 101: Introduction to Literature.It is not comprehensive. It is intended to introduce the novice student of SF literature to the major themes in the genre, as well as books and authors who are representative of different eras in SF lit (including the present day). So you'll find a mix of old and new here, as well as fan favorites tucked in among more literary authors. Back in the mists of time, I used to teach literature and American Studies at the University of California at Berkeley, so I have some experience putting together course materials for university classes very much like one. (In fact, there are a few books on here that I used to teach.)

French in Action: Cult Classic French Lessons from Yale (52 Episodes) During the 1980s, Pierre Capretz, a Yale professor, developed French in Action, a French immersion program that featured textbooks, workbooks, and a 52-episode television series. Aired on PBS, the television series gained a devoted following and, years later, a 25th anniversary celebration at Yale asked the question: Is it fair to say that French in Action now has a cult following? You can watch French in Action for free online at the Annenberg Learner website. (Scroll down the page to find the videos.) The program follows the adventures of Robert Taylor, an American student, and Mireille Belleau, a young French woman. And each 30 minute episode provides a context for learning new words and expressions.

Pixar Pixar Animation Studios, or simply Pixar, is an American computer animation film studio based in Emeryville, California. The studio is best known for its CGI-animated feature films created with PhotoRealistic RenderMan, its own implementation of the industry-standard RenderMan image-rendering application programming interface used to generate high-quality images. Pixar began in 1979 as the Graphics Group, part of the computer division of Lucasfilm before its spin-out as a corporation in 1986 with funding by Apple Inc. co-founder Steve Jobs, who became its majority shareholder. The Walt Disney Company bought Pixar in 2006 at a valuation of $7.4 billion, a transaction which made Jobs Disney's largest shareholder. Pixar has produced thirteen feature films, beginning with Toy Story in 1995.

David Perdue's Charles Dickens Page - A Christmas Carol Reading Text Reading Dickens A Christmas Carol-Dickens' Reading Text Printer Friendly Version 1-Marley's Ghost | 2-The First of the Three Spirits | 3-The Second of the Three Spirits | 4-The Last of the Spirits arley was dead, to begin with. Languages Online Sorry, we could not find the page you requested because: we may have moved or deleted the file you may have mis-typed the web address a link from another site may have been incorrect a search engine listing may be out of date Please try the following: Enter keywords related to the page you’re looking for into the search box Use the navigation to browse for information on your chosen topic Visit our home page to find out more about our site structure to work out where your information is located. See: The Department of Education and Training Report this error

Take a Free Online Course on Making Animations from Pixar & Khan Academy It's a good month for nurturing your creativity: the California College of the Arts just launched a free course on making comics. And now comes another free course that will teach you the basics of animation. Pixar and Khan Academy have teamed up to create "Pixar in a Box," a free online curriculum that shows how Pixar artists use computer science and math concepts to create their innovative films. Topic include Rigging (how characters are brought to life with controls), Rendering (how pixels are painted using algebra ), Character Modeling (how clay models are transformed into digital characters using weighted averages) and more. Enter the self-paced series of lessons, each filled with instructive videos, here. Follow Open Culture on Facebook and Twitter and share intelligent media with your friends.