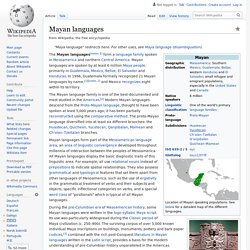 Mayan languages are spoken by at least 6 million Maya people, primarily in Guatemala, Mexico, Belize, El Salvador and Honduras. In 1996, Guatemala formally recognized 21 Mayan languages by name,[notes 2] and Mexico recognizes eight within its territory. Mayan languages form part of the Mesoamerican language area, an area of linguistic convergence developed throughout millennia of interaction between the peoples of Mesoamerica. All Mayan languages display the basic diagnostic traits of this linguistic area. History[edit] Proto-Mayan[edit] Approximate migration routes and dates for various Mayan language families. In the Archaic period (before 2000 BCE), a number of loanwords from Mixe–Zoquean languages seem to have entered the proto-Mayan language.

Classic period[edit] Interview with Roberta Hall representing Scotland on Great British Menu 2020. "It was important to me that the props didnt overshadow the food and that taste was still the most important thing. 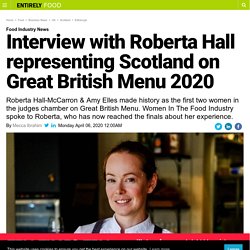 I really wanted to embrace the whole experience as much as possible. "Roberta Hall-McCarron Roberta Hall-McCarron & Amy Elles made history as the first two women who competed in the judges chamber on Great British Menu. Roy of the Rovers. Scrabble banned words: Uproar over words that can no longer be used in board game. The Scrabble world is in uproar over moves by the venerable board game’s owners to ban a long list of words now considered slurs. 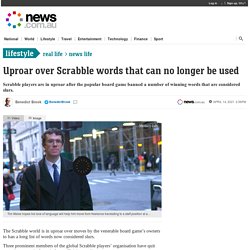 Three prominent members of the global Scrabble players’ organisation have quit over the removal of words from official game lists. They have complained that as Scrabble is a game of words, as long as terms are listed in the dictionary they should be able to be played. Conspiracy Theory Generator - Generator an Original Conspiracy Theory. The US government is operating a Stargate program and that the Iraq War may have been caused because Saddam Hussein had one. 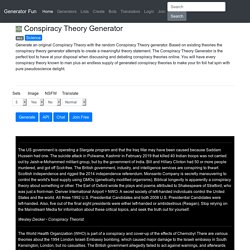 The suicide attack in Pulwama, Kashmir in February 2019 that killed 40 Indian troops was not carried out by Jaish-e-Mohammed militant group, but by the government of India. Bill and Hillary Clinton had 50 or more people murdered, and got off Scot-free. The British government, industry, and intelligence services are conspiring to thwart Scottish independence and rigged the 2014 independence referendum. Monsanto Company is secretly maneuvering to control the world's food supply using GMOs (genetically modified organisms). Biblical longevity is apparently a conspiracy theory about something or other. Wesley Decker - Conspiracy Theorist Manuel Black - Conspiracy Theorist. Ramblings - Beachcombing on the Isle of Sheppey - BBC Sounds. UK Accent Map - Listen To Voices Across The UK. BBC Radio 4 - Word of Mouth, The power of telling stories. Kurt Vonnegut interview on His Life and Career (1983) Jane Austen and Other Writers: Austen first lines. If we take seriously the idea that the first line of a novel sets the tone, and more importantly, encapsulates a novel's central theme, what clues do first lines in Jane Austen's novels offer? 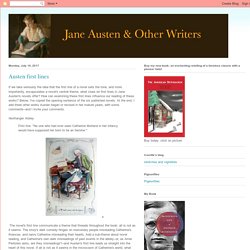 How can examining these first lines influence our reading of these works? Below, I've copied the opening sentence of the six published novels. At the end, I add three other works Austen began or revised in her mature years, with some comments--and I invite your comments. Boiling frog. A frog sitting on a saucepan handle. 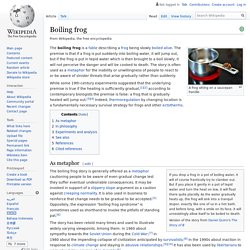 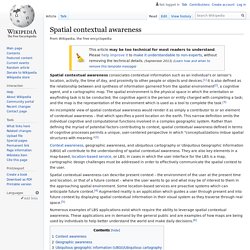 The spatial environment is the physical space in which the orientation or wayfinding task is to be conducted; the cognitive agent is the person or entity charged with completing a task; and the map is the representation of the environment which is used as a tool to complete the task.[3] An incomplete view of spatial contextual awareness would render it as simply a contributor to or an element of contextual awareness – that which specifies a point location on the earth. This narrow definition omits the individual cognitive and computational functions involved in a complex geographic system. Context awareness[edit] Geographic awareness[edit]

Offensive language - Swear words and fricatives/plosives. How to Write a Letter. Our grandparents and great-grandparents wrote letters all the time: to their friends and families, to the bank manager, to express condolences, to complain, to invite someone to visit, to accept an invitation and to thank people for hospitality or gifts. 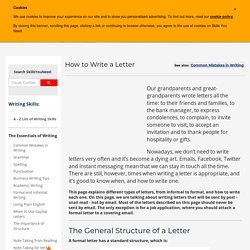 Nowadays, we don’t need to write letters very often and it’s become a dying art. Emails, Facebook, Twitter and instant messaging mean that we can stay in touch all the time. There are still, however, times when writing a letter is appropriate, and it’s good to know when, and how to write one. This page explains different types of letters, from informal to formal, and how to write each one. On this page, we are talking about writing letters that will be sent by post - snail mail - not by email. The General Structure of a Letter. Learn Chinese: Bad Chinese Swear Words. How to Swear in Chinese (Mandarin) The On Being Project. Top 100 Most Beautiful British Slang Words and Phrases – Guide to English Slang.

'The Wombles' by Elisabeth Beresford Quiz. "Eggcorns" Are Language Mistakes That Somehow Still Make Sense. 9 women executives on what they hope to teach their daughters. This Is the Best Way to Take Notes, According to Science. Why Is the Alphabet In ABC Order? Learn Arabic in 1 Hour - ALL You Need to Speak Arabic. Rosen School of Hebrew by Aure Ben Zvi. Procrastinators Club: Your Procrastination Resource. Procrastinate with pride! Introduction to the Perkins Brailler - Statewide Vision Resource Centre. Listening. Meaning of the Ankh, an Ancient Egyptian Symbol. Quotev. Hobart Book Village. Unknown years of Jesus. The unknown years of Jesus (also called his silent years, lost years, or missing years) generally refers to the period of Jesus's life between his childhood and the beginning of his ministry, a period not described in the New Testament.[1][2] The "lost years of Jesus" concept is usually encountered in esoteric literature (where it at times also refers to his possible post-crucifixion activities) but is not commonly used in scholarly literature since it is assumed that Jesus was probably working as a carpenter in Galilee, at least some of the time with his father Joseph, from the age of 12 to 29, so the years were not "lost years", and that he died on Calvary.[2][3][4] The 18 Unknown Years[edit] New Testament gap[edit] Background of Galilee and Judea[edit] Other sources[edit] 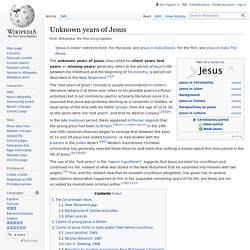 The Boy Jesus in the Temple (Luke 2:39-52) Text Luke 2:39-52 [39] When Joseph and Mary had done everything required by the Law of the Lord, they returned to Galilee to their own town of Nazareth. [40] And the child grew and became strong; he was filled with wisdom, and the grace of God was upon him. [41] Every year his parents went to Jerusalem for the Feast of the Passover. [42] When he was twelve years old, they went up to the Feast, according to the custom. [43] After the Feast was over, while his parents were returning home, the boy Jesus stayed behind in Jerusalem, but they were unaware of it. [44] Thinking he was in their company, they traveled on for a day. 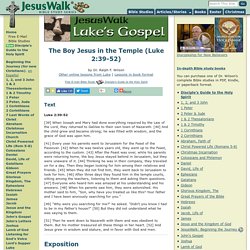 . [49] "Why were you searching for me? " What big data can tell us about how a book becomes a best-seller. The average American reads 12 or 13 books a year, but with over 3 million books in print, the choices they face are staggering. Despite the introduction of 100,000 new titles each year, only a tiny fraction of these attract a large enough readership to make The New York Times best-seller list. Which raises the questions: How does a book become a best-seller, and which types of books are more likely to make the list? I’m a data scientist. Is Joey Essex really dumb or is it an act – Singletrack Magazine. Snowflakes and trigger warnings: Shakespearean violence has always upset people.

We are repeatedly told that today’s young people are oversensitive, claiming to need “trigger warnings” and to be traumatised by literary texts – including the works of Shakespeare – that previous generations took in their stride. But is it really true that readers and theatregoers of the past were more emotionally resilient than today’s “snowflake” generation? In his 1765 edition of the The Plays of William Shakespeare, the great 18th-century critic Samuel Johnson admitted that reading certain scenes in Shakespeare’s King Lear gave him a sense of extreme discomfort. He found the death of Lear’s daughter, Cordelia, in the tragedy’s last act, so upsetting that he avoided ever reading the scene again until he was forced to do so by his work as an editor. Moreover, he claimed, the blinding of the elderly Gloucester in the middle of the play was so terrible that a theatre spectator would not be able to cope with it.

Oxford’s Library Once Branded Its Sauciest Books With a Greek Letter. The Hobo Hieroglyphs: Their Secret Symbols, Explained. The Competitive Book Sorters Who Spread Knowledge Around New York. Abigail Johnson. I have done this site especially for Abigail Johnson in order to visit crazybillionaire.org Abigail Johnson Abigail Pierrepont Johnson (born December 19, 1961) is an American businesswoman.

Johnson runs part of Fidelity Investments, a company led by her father, Edward Johnson. In September 2008, her net worth was estimated at US$15 billion, tieing her for 15th place in Forbes List of the 400 Richest Americans. (Her father, with $11 billion, is tied for 28th place.) This Common English Word Is the Next One to Go Extinct, According to Research. The Competitive Book Sorters Who Spread Knowledge Around New York.

The fascinating reason that children write letters backwards. Enter the Age of Borderless Memes. The Mystery of People Who Speak Dozens of Languages. The News Literacy Project is teaching kids to stop fake news. Why it matters that teens are reading less. Why West Africa's pidgins deserve full recognition as official languages. The BBC World Service’s radio service of English-based Pidgin for West and Central Africa, BBC News Pidgin, is now a year old. Alexa and Google Home are no threat to regional accents – here's why. Is talking to yourself a sign of mental illness? An expert delivers her verdict.

Deaf service cuts: a stark reminder of deaf education's troubled history. Emotions shape the language we use, but second languages reveal a shortcut around them. 20 words that aren’t in the dictionary yet. WorldCat.org: The World's Largest Library Catalog. How we discovered three poisonous books in our university library. College Kids React To The Greatest Speech Ever Made (The Great Dictator) Mouth clicks used in human echolocation captured in unprecedented detail.

What a difference a word can make. Yanny or Laurel? It's your brain not your ears that decides. Studying chimpanzee calls for clues about the origins of human language. The Roald Dahl Museum and Story Centre. Babies prefer the sounds of other babies to the cooing of their parents. Not a Word. Sophie Scott: Why we laugh. Etymology. Onomatopoeia in Different Languages. What do you call words that sound lik... The way you see colour depends on what language you speak. As marijuana goes mainstream, what’s happening to the way we talk about weed? How language can affect the way we think. Nietzsche on Truth, Lies, the Power and Peril of Metaphor, and How We Use Language to Reveal and Conceal Reality. This bilingual Somali newspaper is beating the media at its own game.