Complete Arabic. Browse translators. English is one of the world's "weirdest" languages, say linguists. Is English a “weird” language? 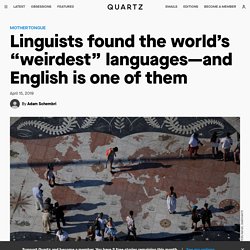 Many of us might feel this is true when we’re trying to explain its complex spelling rules, or the meanings of idioms such as “it’s raining cats and dogs” to someone who is learning it. Teaching or learning any language is, however, never an easy task. But what is a “weird” language anyway? As linguists, we generally aim to be as objective as possible in the study of human language. Mate – a translator app you'll actually love. Mate is used by more than 600,000 users every month. 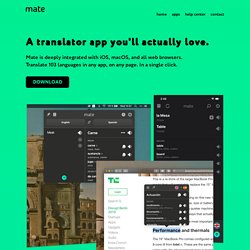 And, 99% of these people are extremely happy with Mate! Mate for Mac Awesome Excellent translator, it integrates very well with safari and allows automatic translation of both the entire page and single sentences. Excellent App. Best translator for the app store. Very perfect application. Conversational Topics for Specific Language Levels (A1, A2, B1, B2, etc.) Establishing which language level you're at can be quite tricky. 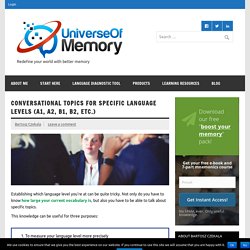 Not only do you have to know how large your current vocabulary is, but also you have to be able to talk about specific topics. This knowledge can be useful for three purposes: Of course, if you just learn for fun or you don't need official papers, you shouldn't worry too much about being able to talk about all those topics. Our Guide to French Internet & Text Slang. What do kids say these days? 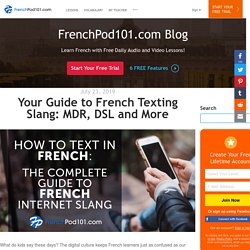 Explore The English Language. Learn Languages - Grammar and Vocabulary. Language for Work > Resource Centre. Māori Words and Phrases - Māori Language.net. What Language Is Spoken in India? The Republic of India is the world’s seventh largest country by area as well as the world's second most populous country. 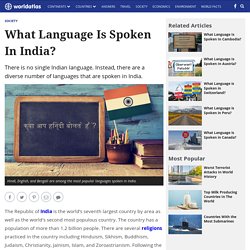 The country has a population of more than 1.2 billion people. There are several religions practiced in the country including Hinduism, Sikhism, Buddhism, Judaism, Christianity, Jainism, Islam, and Zoroastrianism. Following the market reforms of 1991, India is one of the fastest growing economies in the world and is home to the third largest economy by purchasing power parity. Marketgloss - glossário de termos técnicos em inglês de marketing. Econogloss - glossário de termos técnicos em inglês de economia, finanças e e.commerce. Lingro: The coolest dictionary known to hombre! Translator. Vivre en France - B1. Instructional Materials and Glossaries - Resources - NYU Steinhardt. Keys for Writers. Unravel Magazine. Poly, the Platform That Wants to Teach You Every Language in the World. Image courtesy Wikitongues. 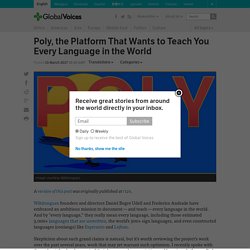 A version of this post was originally published at r12n. Wikitongues founders and directors Daniel Bogre Udell and Frederico Andrade have embraced an ambitious mission to document — and teach — every language in the world. And by “every language,” they really mean every language, including those estimated 3,000+ languages that are unwritten, the world’s 300+ sign languages, and even constructed languages (conlangs) like Esperanto and Lojban. Skepticism about such grand claims is natural, but it’s worth reviewing the project’s work over the past several years, work that may yet warrant such optimism. 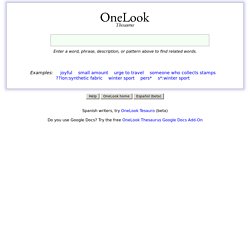 Termsciences: is a terminology portal developed by INIST in association with LORIA and ATILF. Its aim is to promote, pool and share the terminological resources (specialist vocabularies, dictionaries, thesaurus) of public sector research and further education establishment to thus create a common terminological reference resource. Glossaries from EU institutions and bodies : a compilation of nearly 300 glossaries on various topics of EU legislation such as agriculture, taxation, migration or technology, containing relevant EU jargon, many of them in all 24 official EU languages. Tilde Terminology: terminology extraction and lookup in the cloud – about 5 million standardised and reliable terms; cloud facilities for terminology management and sharing; integrated terminology recognition and lookup in Translation Environment Tools: SDL Trados Studio, Wordfast Anywhere, OmegaT, memoQ. 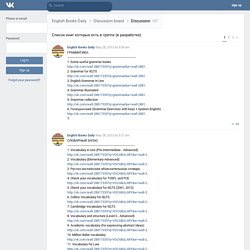 The World's Most Spoken Languages And Where They Are Spoken. Love in Translation. I moved to Geneva to be with my husband, Olivier, who had moved there because his job required him to. 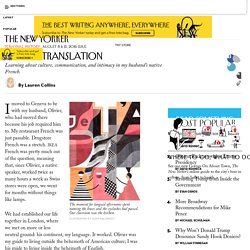 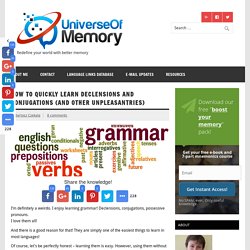 I enjoy learning grammar! Declensions, conjugations, possessive pronouns. I love them all! And there is a good reason for that! Explicit cookie consent. JOHNSON is a fan of the Freakonomics books and columns. But this week’s podcast makes me wonder if the team of Stephen Dubner and Steven Levitt aren’t overstretching themselves a bit. “Is learning a foreign language really worth it?” , asks the headline. How to identify any language at a glance. Sign Up for Our free email newsletters Thanks to globalization, it's very likely that at some point you've found yourself faced with a line of text written in a language you couldn't quite identify. Maybe in the international section of a grocery store, or on Facebook, for example. "What the heck is this language? " you ask yourself. To get the answer, often all it takes is a little character. Does grammar matter? - Andreea S. Calude.

8 Practical Ways to Learn All the Foreign Language Vocabulary Needed for Conversational Fluency. Did you know that 1,000 words can get you a long, long way in a foreign language? It might not seem that easy when you’re looking at the raw numbers. The Oxford English Dictionary includes more than 170,000 English word entries.

The “Hanyu Da Cidian” dictionary includes 370,000 Mandarin Chinese words, and the “Explanatory Dictionary of the Living Great Russian Language” includes 200,000 Russian words. Most languages have similar numbers of words circling around. As a language learner, these numbers can seem downright crazy! Luckily, you don’t need to learn anywhere near that many words to communicate proficiently. So simply learning 1,000 words can get you far in your ability to understand texts and communicate with people. With a little strategy and the right tools, you can learn much faster and easier than you might have imagined.

What's the best way to teach languages? Consequently sentence examples. Lexical Distance Among the Languages of Europe « Etymologikon™ Posted by Teresa Elms on 4 March 2008 This chart shows the lexical distance — that is, the degree of overall vocabulary divergence — among the major languages of Europe. The size of each circle represents the number of speakers for that language. Could There Soon Be A Global Language? Scientists say the ways humans describe nature transcends culture and geography. Inglês Lição 2. Começo: Eu falo um pouco: Vocabulário. What Languages Are the Hardest to Learn? Indo-European Languages: Free Online Tutorials & Exercises. Omniglot - the online encyclopedia of writing systems and languages.

European Maps Showing Origins Of Common Words. U.S. playwright Rita Mae Brown said: "Language is the road map of a culture. It tells you where its people come from and where they are going. " That quote comes to mind looking at these fascinating European etymology maps of various commons words posted by reddit user sp07, which provide a kind of cultural commentary on Europe. The word for "church" shows the influence of ancient Greece: Online dictionary. Forvo: the pronunciation guide. All the words in the world pronounced by native speakers. Word Map. Langscape: Map. Online Graphical Dictionary and Thesaurus. One World - Nations Online - The Nations Online Project, a World Guide™