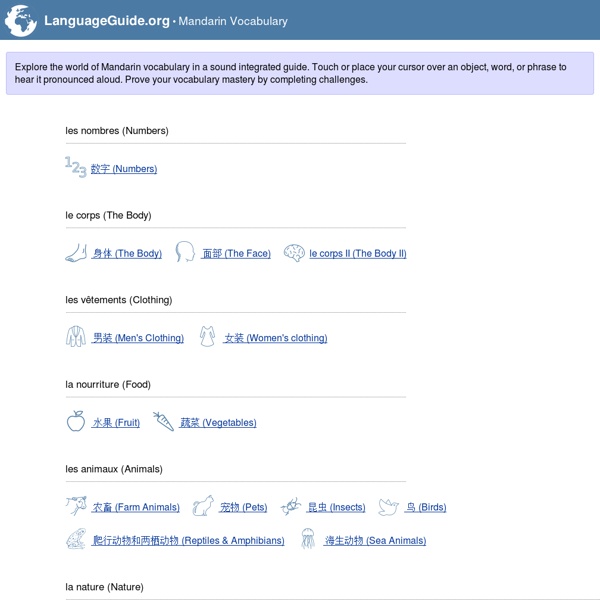 LearnchinesePod.com | Learn Chinese Languages - Chinese Chinese Flashcards - Learn Chinese Online English to Chinese dictionary Examples and Help Example queries: hello, nihao, ni3hao3, 你好, rest*, zei*, *zei*, *茶, 英*公司, chinese *文, "to rest", bill -gates Pinyin words should be entered without spaces, either with or without tone numbers: ni3hao3 or nihao. The character ü can be entered as v instead. The asterisk character * can be used as a wildcard to match zero or more characters: rest* will match any word starting with rest, such as restaurant or restrain*文 will match any word ending with 文, such as 中文 or 英文b*g will match any word starting with b and ending with g, such as big or boring*中国* will match any word containing 中国, such as 传统中国医药 or 中国人民 Double quotes " " can be used to group search terms together: "to rest" will only match entries where to and rest directly follow eachother The minus symbol - can be used to find entries without a certain search term: bill -gates will only match entries matching bill but without gates p:you will only match entries with Mandarin pinyin you

Chinese Vocabulary Trainer | Learn Chinese Online San Zi Jing narrated in Chinese with English Translation - Audio ), a noted scholar of the Song dynasty. It was used as we use Grimm or perhaps the Little Golden Books; as a basic primer for pre-literate children. Because we now have so many sources of literature and entertainment, we no longer have the Horatio Alger stories, the McGuffy readers, or other common forms of socializing our children. The closest we come to what the San Zi Jing provided is Disney. The San Zi Jing provided a chain of culture and knowledge that linked centuries of children. The San Zi Jing has been translated many times and into many languages. At the time of Giles' translation there were already many versions of the San Zi Jing in Chinese. The present version of the Chinese San Zi Jing is an adaptation of the one translated by Herbert Giles. The Internet version used by Smogor was in Big5 and could not show all of the characters.

Xiaoma Cidian - Chinese English Dictionary Day Day Up Chinese! Free Online Mandarin Chinese Self-Study Textbook In the second lesson we will learn how to make simple questions using the question word 吗? ma? So how do you make a question? 2.01 Simple questions >> Listen to the MP3 (right click to save) Notes: Remember that the word order in Chinese sentences is the same for statements as it is for questions, which is quite different from English, where there is special word order signifying that the sentence is an interrogative one. 2.02 Countries and Nationalities >> Listen to the MP3 (right click to save) Notes: To make a statement about a person's nationality, simply add the character 人 rén to the name of the country. There is another word for referring to people in the abstract, 人民 rénmín. 2.03 Pronouns + Nationality complement in statement and question form >> Listen to the MP3 (right click to save) 2.04 Nationality - a simple dialogue Notes: Wow! Exercises A Transcribe the characters below into pinyin B Translate the pinyin into English D Fill in the blanks for this dialogue

Internet Software for Learning Chinese Characters - Chinese Learning 中文学习互助 - China Forum Recently I started think seriously about studying chinese, I found some useful resources that other people may find useful. There are lots and lots of free software learning resources around, however I wanted to try and find a single resource with as much as possible in the same place. The software courses on these sites all have to be paid for, but they may be worth it if provides you with a convenient method of learning Hanzi. (1) This is perhaps my favourite resource, since it combines character drawing and audio for learning pronunciation. (2) This is a more flash-card type system, but it is better than a usual flashcard, in that there are inbuilt tests, as well as contecnt sentences. (3) This is a simple flashcard system that I quite like, just because it is so simple to use. I hope that other people studying might find these useful. I know that there are lots of free resources as well..