What Colors Mean in Different Cultures 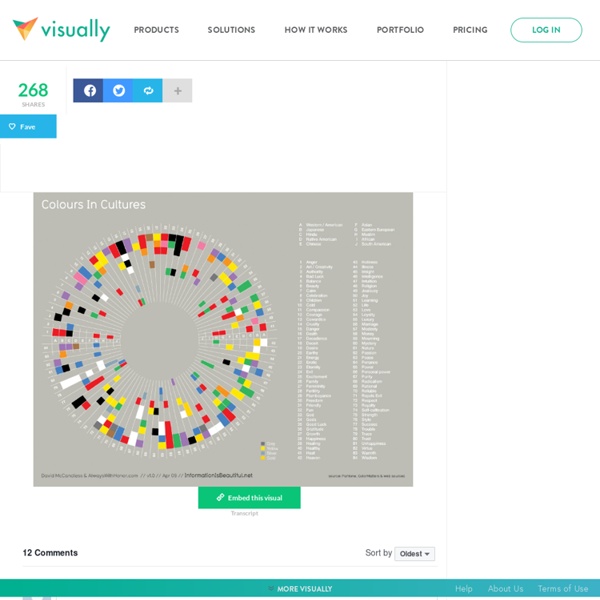 Mood Map Emotions create subjective feelings that are often evaluated as “feeling good” or “feeling bad”. Emotions also tend to increase or decrease our arousal level, which we often describe as increasing or lowering our energy level. The map shown here places each of the major emotions roughly where they are often experienced in these two dimensions. The placement of each emotion on this map is only approximate and very subjective. Each emotion can vary greatly in intensity.

Pictures at an Exhibition Mussorgsky in 1874 The suite is Mussorgsky's most famous piano composition, and has become a showpiece for virtuoso pianists. It has become further known through various orchestrations and arrangements produced by other musicians and composers, with Maurice Ravel's arrangement being the most recorded and performed. Color Consumption - RockPaperInk.com June 14, 2012 Authors: Jake Lefebure, Pum Lefebure In the new world of motion graphics, the oldest design rule still applies: less is more. With a combination of animation, sound and time, controlling the visual design of a piece could be the difference between giving your viewers an energetic and memorable experience or overload them into a rainbow-induced seizure. Callanish Stones The Callanish Stones (or "Callanish I", Clachan Chalanais or Tursachan Chalanais in Gaelic) are an arrangement of standing stones placed in a cruciform pattern with a central stone circle. They were erected in the late Neolithic era, and were a focus for ritual activity during the Bronze Age. They are near the village of Callanish (Gaelic: Calanais) on the west coast of Lewis in the Outer Hebrides, Scotland. Location[edit] The Callanish Stones (grid reference NB213330) are situated on a low ridge above the waters of Loch Roag with the hills of Great Bernera as a backdrop.[1] Management[edit]

Faces of Product Pleasure: 25 Positive Emotions in Human-Product Interactions Faces of Product Pleasure: 25 Positive Emotions in Human-Product Interactions Pieter M. A. Desmet Delft University of Technology, Faculty of Industrial Design Engineering, Delft, The Netherlands The study of user emotions is hindered by the absence of a clear overview of what positive emotions can be experienced in human-product interactions. The Unknown Masterpiece by Honoré de Balzac Le Chef-d’oeuvre inconnu Also translated as The Hidden Masterpiece Part I: Gillette This short story turned out to be a delightful study of what makes great art. There are three painters, young Nicolas Poussin, the middle-aged court painter Franz Pourbus (whom Balzac calls Porbus)–both of whom were real 17th Century French painters–and Balzac’s invented older artist, Maitre Frenhofer.

Silent summer: No wolf pup yips heard on Isle Royale On the largest island in Lake Superior, scientists gather year after year to study the dynamics between wolves and moose. For forty years, the scientists have come to take part in this iconic predator-prey study, and for forty years the sound of high-pitched yips have greeted their ears, heralding a new generation of wolf pups. That is, until last summer. It was a summer without yips. Aerial surveys supported the implications of that silent summer—the wolves of Isle Royale did not produce pups. As the wolf population has declined to eight individuals, all closely related, their ability to survive and reproduce has declined as well in a phenomenon known as inbreeding depression.

List of Emotions - Human Emotional Chart This list of human emotions plots the descending spiral of life from full vitality of the energy of life and high consciousness through half-vitality and half-consciousness down to death. This list of emotions chart also enables to both predict and understand human behavior in all manifestations, making possible to predict the behavior of a potential spouse, a business partner, employee or friend - before you commit to a relationship. Numbers assigned to this list of emotions chart are arbitrary to show a relative degree or intensity of perceived emotion of happiness in accordance to available creative power or life's energy to the individual.

Exploring Linear Perspective Linear perspective is a mathematical system for creating the illusion of space and distance on a flat surface. The system originated in Florence, Italy in the early 1400s. The artist and architect Brunelleschi demonstrated its principles, but another architect and writer, Leon Battista Alberti was first to write down rules of linear perspective for artists to follow. 11 Colorful Phrases From Ancient Roman Graffiti When the cities of Pompeii and Herculaneum were suddenly consumed by the eruption of Mount Vesuvius in 79 C.E., many of their buildings were so intimately preserved that modern archaeologists can even read the graffiti scribbled onto their ancient walls. See if any of these remind you of a twenty-first century bathroom. 1.

Recognize these emotions The Passion and Reason 15 The book Passion and Reason provides clear definitions and descriptions of 15 separate emotions. These are: Eye Overview[edit] Complex eyes can distinguish shapes and colours. The visual fields of many organisms, especially predators, involve large areas of binocular vision to improve depth perception. Ueno Park, Sakura Picture perfect for this picnic. Wish I could have sat down and joined in. Beautiful Sakura. So many people enjoying themselves, whether they were sitting down and drinking or just walking on by. Japanese life under the Sakura wave The empty bottles are lined up, the drawings left behind.