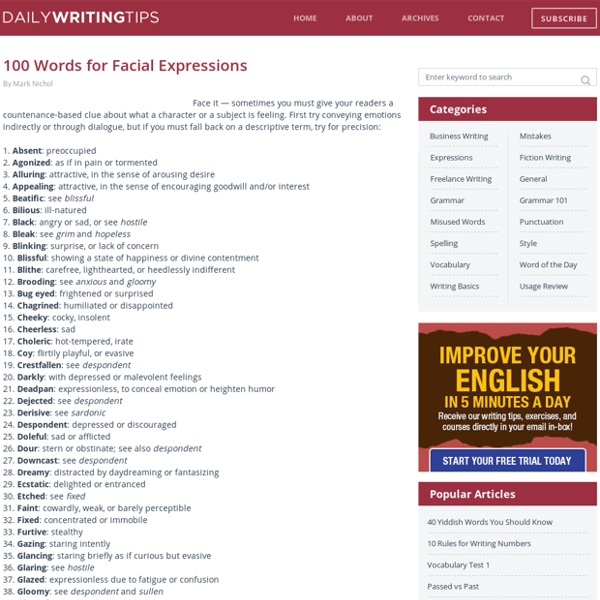 By Mark Nichol Face it — sometimes you must give your readers a countenance-based clue about what a character or a subject is feeling. First try conveying emotions indirectly or through dialogue, but if you must fall back on a descriptive term, try for precision: 1. Absent: preoccupied 2. Agonized: as if in pain or tormented 3. Subscribe to Receive our Articles and Exercises via Email You will improve your English in only 5 minutes per day, guaranteed! 12 Responses to “100 Words for Facial Expressions” Lucia Hello! Related:  lexique

25 Synonyms for Story by Mark Nichol So, you’re writing a story? What kind of story? No, don’t unreel the plot for me. Provide some context for the narrative style by telling me what your model is for your tale. 1. 2. 3. 4. 5. 6. 7. 8. 9. 10. 11. 12. 13. 14. 15. 16. 17. 18. 19: Record: (see annals) 20: Roman a clef (French, “novel with a key”): a story with thinly disguised versions of actual characters and events 21: Short story: a tale shorter than a novel, featuring relatively few characters and focusing less on plot than on mood 22: Short short story: an especially brief story 23: Tall tale: a story intended to entertain through the introduction of exaggerated elements 24: Urban legend/urban myth: a moralistic or sensational story presented and widely perceived as fact 25: Yarn: a story that is adventurous or humorous or both, and perhaps is a tall tale (see “tall tale,” above)

Writing Tips: Abolish the Adverbs Are they slowly running or are they jogging? Adjectives and adverbs are modifiers. Adjectives modify nouns whereas adverbs modify verbs, other adverbs, adjectives, phrases, and clauses. In fact, an adverb can modify an entire sentence. For example, car is a noun and red is an adjective. But run quickly is better stated as sprint. The examples above demonstrate why adjectives can be useful in writing and why adverbs are usually useless. Why Adverbs Are Weak and How They Weaken Your Writing “The road to hell is paved with adverbs.” ~ Stephen King Here’s a list of 3732 adverbs. “Why don’t you come over here and sit by me?” It’s a horrid sentence. “Why don’t you come over here and sit by me?” It may not be the greatest sentence ever written, but showing the character batting her eyelashes is a lot better than telling readers she asked a question flirtatiously. Most adverbs either tell us what we already know or use too many words to communicate an image or idea. It’s a very warm day.

Weather base IdiomSite.com - Find out the meanings of common sayings 40 Synonyms for Praise by Mark Nichol Last week, I offered a list of synonyms for the word criticize. To avert criticism (admonishment, censure, chastising, and so on), I offer here a roster of synonyms for its antonym, praise, in that word’s verb form as well as when it’s used as a noun. 1. Acclaim: To applaud or praise; also a noun referring to the action of applause or cheering. 2. 3. 4. 5. 6. 7. 8. 9. 10. 11. 12. 13. 14. 15. 16. 17. 18. 19. 20. 21. 22. 23. 24. 25. 26. 27. 28. 29. 30. 31. 32. 33. 34. 35. 36. 37. 38. 39. 40. 45 ways to avoid using the word 'very' Writers Write is your one-stop resource for writers. Use these 45 ways to avoid using the word ‘very’ to improve your writing. Good writers avoid peppering their writing with qualifiers like ‘very’ and ‘really’. They are known as padding or filler words and generally add little to your writing. According to Collins Dictionary: ‘Padding is unnecessary words or information used to make a piece of writing or a speech longer. Adding modifiers, qualifiers, and unnecessary adverbs and adjectives, weakens your writing. This post gives you 45 ways to avoid using the padding word ‘very’. Three Telling Quotes About ‘Very’ “Substitute ‘damn’ every time you’re inclined to write ‘very;’ your editor will delete it and the writing will be just as it should be. If you enjoyed this, you will love: Top Tip: If you want to learn how to write a book, sign up for our online course. by Amanda Patterson © Amanda Patterson

Idioms – as clear as mud? Miranda Steel is a freelance ELT lexicographer and editor. She has worked as a Senior Editor for dictionaries for learners at OUP and has also worked for COBUILD. In this post, she looks at some of the weird and wonderful idioms in the English language. Idioms are commonly used in spoken and written English. They add colour and interest to what we are saying. Native English speakers are usually confident that their readers or listeners will recognize the idiom, so well-known phrases rarely need to be given in full. Some idioms can be shortened in other ways such as long story short (to cut a long story short). “Anyway, long story short, it turns out Drake isn’t really his father.” Sometimes only a fragment of the original idiom remains. Another common way of changing an idiom is to reverse its meaning. Many idioms are very versatile and can be changed in a variety of ways. “Why use a stick when a carrot will work better?” “Their approach is all stick and no carrot.” Like this: