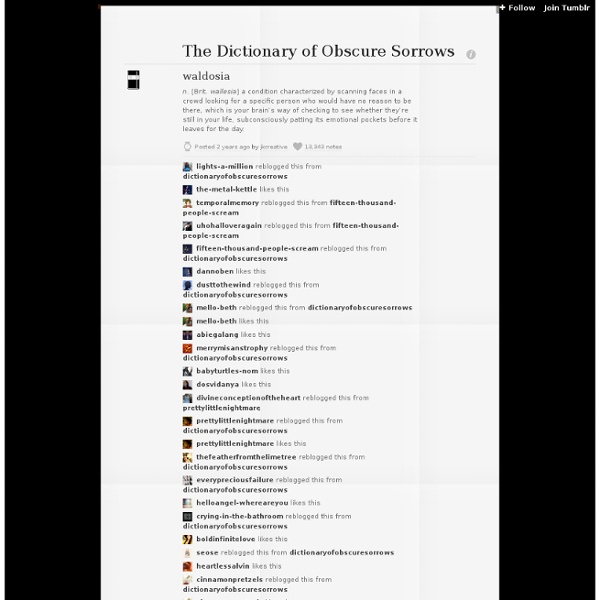 The Dictionary of Obscure Sorrows is a compendium of invented words written by John Koenig. Each original definition aims to fill a hole in the language—to give a name to emotions we all might experience but don’t yet have a word for. The author's mission is to capture the aches, demons, vibes, joys and urges that roam the wilderness of the psychological interior. Each sorrow is bagged, tagged and tranquilized, then released gently back into the subconscious. ▸ visit the facebook page to hear the backstory behind each word ▸ follow on twitter (@obscuresorrows) for whatever reason ▸ send me a tumblr message describing emotions you need words for ▸ send me an email via obscuresorrows@gmail.com JOHN KOENIG is a designer and commercial director who lives in St. He is currently writing a book version of The Dictionary of Obscure Sorrows. Copyright © 2013 John Koenig.

Belief Systems By Kanta Jacob Katz Ph.D Guest Writer for Wake Up World Our belief systems are thoughts that have become our habits that determine what we think, what we feel and how we react to life. They influence every fiber of our being. In our everyday life when we talk about “beliefs” we usually refer to the values we adopt consciously in our life, to our social, political and religious ‘beliefs’ according to which we act and behave. How to Be Assertive (Without Losing Yourself) Your very lucky your knew who you wanted to be in high school. I'm 27 and I still dont know who/what I want to be. Thanks. I'm your age, actually. It wasn't so much deciding what I wanted to be, but who I wanted to be. Lover Boys - Witness Filmmakers: Julia Rooke and Caroline Pare This is the story of Ibrahim, a courageous Dutch-Moroccan social worker in the Netherlands who is tackling the high incidences of sex-trafficking of young Dutch girls by their so-called 'boyfriends' - the Lover Boys - the majority of whom are Dutch-Moroccan. It is a taboo subject, but Ibrahim and his allies, including a local sheikh, are determined to remove this stain from their community. This raw and often graphic film introduces us to both perpetrators and victims of this branch of internal sex-trafficking.

Icy Finger of Death Filmed for the First Time Like a lightning bolt hurled down from Mount Olympus, an icy “finger of death” strikes at sea life beneath the Antarctic ice shelf in what is surely one of the most jaw-dropping natural history sequences ever filmed. Called a brinicle, or brine icicle, this sinister tube of ice grows over a matter of hours as super-salty brine leeches from the forming sea ice above. This video — a scene from Frozen Planet, premiering on Discovery Channel on March 18 — illustrates how this happens, as well as the deadly consequences for the slow-moving marine invertebrates in its path. The brinicle was filmed in 2009 by underwater cameramen Doug Anderson and Hugh Miller.

Want To Have More Fun? Go On a Mission Writer Jean Stafford scoffed, “Happy people don’t need to have fun,” but in fact, studies show that the absence of feeling bad isn’t enough to make you feel good; you must strive to find sources of feeling good. Research shows that regularly having fun is a key factor in having a happy life; people who have fun are twenty times more likely to feel happy. Recently, I noticed a pattern among activities that people find fun: Go on a mission. There’s something about having a playful purpose, of trying to achieve something, that makes an activity more fun. 25 Things You Should Know About Character Previous iterations of the “25 Things” series: 25 Things Every Writer Should Know 25 Things You Should Know About Storytelling And now… Here you’ll find the many things I believe — at this moment!

Jake Reilly's 'Amish Project:' 90 Days Without a Cell Phone, Email and Social Media Could you live without daily electronic conveniences—Twitter, Facebook, email, texting and more—for 90 days? Jake P. Reilly, a 24-year-old copywriting student at the Chicago Portfolio School, did just that. From October to December, he unplugged from social media, email, texts, and cell phones because he felt that we spend more quality time with gadgets and keyboards than we do with the people we really care about. During his social experiment, he found that some people he counted among his close friends really weren't that close after all. He also discovered that taking a break from his relationship with social media and really paying attention to the people around him can revive real-life romance.

A Simple Strategy for Neutralizing Stress I was sued by the Prime Minister of my country 2 years ago - a direct lawsuit against my reply -with a lot of sarcasm- to one of his statements, on my blog. The guy wanted me in jail. Seriously. Plus; the governments changed the laws a little bit too much for themselves and got judges and prosecutors under their control so there was so little chance that I, a university student with a simple personal blog would be justified agains the Prime Minister of the whole country! Internet Resources - Writers Resources - Writing Links & Writers Links for Writers - Word Stuff Unsorted [/writers] James Patrick Kelly - Murder Your Darlings - "When time comes to make that final revision, however, you must harden your heart, sharpen the ax and murder your darlings." Greda Vaso - Determining the Readability of a Book - includes formulas for Gunning's Fog Index, Flesch Formula, Powers Sumner Kearl L. Kip Wheeler - Literary Terms and Definitions L. Kip Wheeler - Comp - Lit - Poetry - Links - more Style - Grammar - Errors in English [/writers]American Heritage - Book of English Usage - free download Band-Aid AP StylebookPaul Brians - Common Errors in EnglishCJ Cherryh - Writerisms and other Sins The Chicago Manual of Style FAQ Gary N.