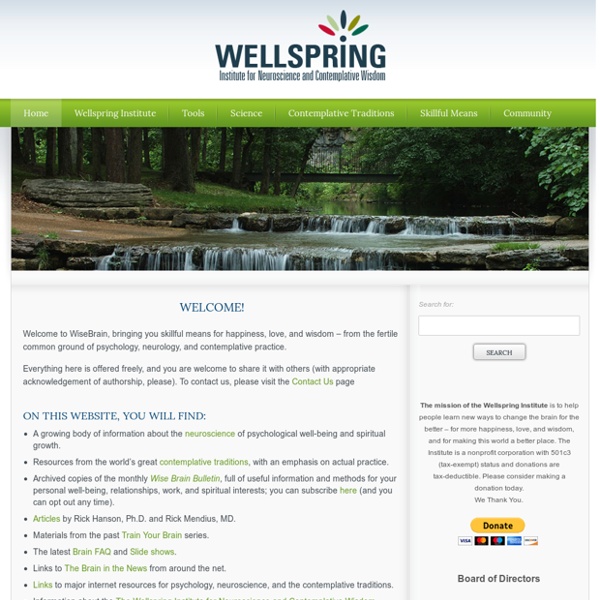 Authentic Happiness | Authentic Happiness 50 Life Secrets and Tips Memorize something everyday.Not only will this leave your brain sharp and your memory functioning, you will also have a huge library of quotes to bust out at any moment. Poetry, sayings and philosophies are your best options.Constantly try to reduce your attachment to possessions.Those who are heavy-set with material desires will have a lot of trouble when their things are taken away from them or lost. Possessions do end up owning you, not the other way around. Become a person of minimal needs and you will be much more content.Develop an endless curiosity about this world.Become an explorer and view the world as your jungle. Read “Zen and the Art of Happiness” by Chris Prentiss.This book will give you the knowledge and instruction to be happy at all times regardless of the circumstances.

Christophe André Don’t Quarrel | Dr. Rick Hanson - Author of Buddha's Brain and Just One Thing posted on: November 30th, 2012 Who do you argue with?The Practice:Don’t quarrel.Why? It’s one thing to stick up for yourself and others. Similarly, it’s one thing to disagree with someone, even to the point of arguing – but it’s a different matter to get so caught up in your position that you lose sight of the bigger picture, including your relationship with the other person. You know you’re quarreling when you find yourself getting irritated, especially with that sticky feeling that you’re just not gonna quit until you’ve won. Quarrels happen both out in the open, between people, and inside the mind, like when you make a case in your head about another person or keep revisiting an argument to make your point more forcefully. However they happen, quarrels are stressful, activating the ancient fight-or-flight machinery in your brain and body: a bit of this won’t harm you, but a regular diet of quarreling is not good for your long-term physical and mental health. How?

Anyway, The Paradoxical Commandments - Do It Anyway - Kent M. Keith, Silent Revolution Flourish The university campus is a fertile setting for students to flourish – i.e., to grow intellectually, socially and emotionally and to translate this growth into action, habit and purpose. Flourish is a UTSC program to help you learn skills that foster growth. By systematically identifying academic and character strengths, the program will help you to learn effective stress management, improve your academic performance and boost your overall well-being. Flourish is a collaborative initiative involving Academic Advising & Career Centre, AccessAbility Services, Athletics & Recreation, Health & Wellness Centre, Office of the Registrar, Office of the Dean (Academic), and the Office of Student Affairs & Services. • are intellectually and socially engaged; • harness the best within you toward a purpose that you have defined • feel that you matter!