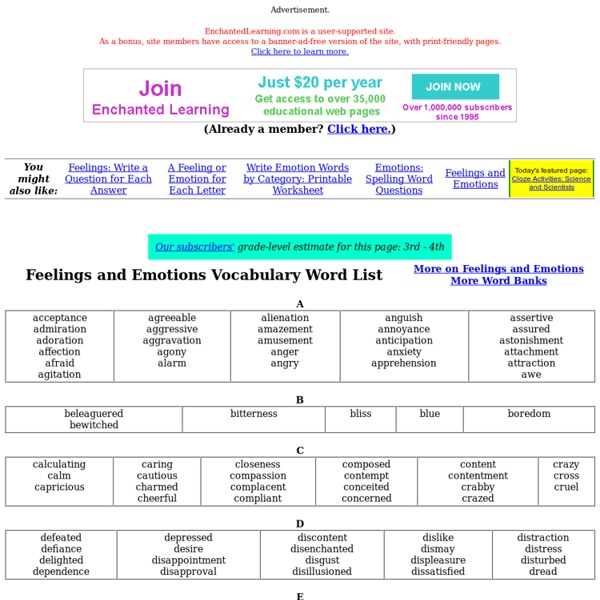 Advertisement. EnchantedLearning.com is a user-supported site. As a bonus, site members have access to a banner-ad-free version of the site, with print-friendly pages.Click here to learn more. (Already a member? Click here.) More Word Lists

Writer Creates “Color Thesaurus” To Help You Correctly Name Any Color Imaginable Ingrid Sundberg, a writer and children’s book illustrator, created a very useful infographic chart for anyone struggling with color names. The writer says that she loves to collect words that can help give her stories variety and depth. Show Full Text “I’ve learned that we all have different associations with color words,” Sundberg told Bored Panda. “For example the color sapphire is a light blue to me (since that’s the color of the sapphire on my engagement ring), but a sapphire can also be a very dark blue. I doubt there can be an ‘official color guide,’ as color is so subjective.” 25 Common Phrases That You're Saying Wrong Being a freelance writer, I often find myself messing up common phrases. When I’m unsure, I do a quick Google search to make sure that what I’m writing is actually what I’m trying to say. This inspired me to come up with a list of common phrases that people frequently get wrong. Some of them aren’t completely our fault because the incorrect way of saying them has actually become the “norm”.

20 more awesomely untranslatable words from around the world If only you could use these words in Scrabble. Photo: Jeremy Mates When linguists refer to “untranslatable” words, the idea is not that a word cannot somehow be explained in another language, but that part of the essence of the word is lost as it crosses from one language to another. This often is due to different social and cultural contexts that have shaped how the word is used. How to use Google for Hacking Google serves almost 80 percent of all the search queries on the Internet, proving itself as the most popular search engine. However, Google makes it possible to reach not only the publicly available information resources, but also gives access to some of the most confidential information that should never have been revealed. In this post, you will find the information on how to use Google for exploiting security vulnerabilities that exists within many websites. The following are some of the ways to use Google for hacking: 1. Using Google to Hack Security Cameras:

100 Mostly Small But Expressive Interjections David Bier Thanks for this – what a fun post considering there’s no actual narrative in it! Cecily Some of these interjections are quite culturally and age specific, so if people need to be told what they mean, they should probably not be using them.For example, to many Brits, va-va-voom is not old-fashioned at all, but instead is firmly linked to the long-running ads that footballer Thierry Henry made for the Renault Clio. Himanshu Chanda Whoa ! Animal Adjectives Animal Adjectives While there are other forms of adjectives for animals, by far the greater majority of such words end in -ine; thus the following list deals excusively with this type. The -ine suffix comes from the Latin -inus and forms terms meaning 'of or relating to' or 'of the nature of'.

50 Most Challenging Words Back in 2010 The New York Times published a list of 50 fancy words that most frequently stump their readership. The New York Times 50 Fancy Words (defined and used) 1. Inchoate: just begun and so not fully formed or developed I am glad your inchoate proposals for integrating the company were not accepted this time, thus saving us face. Google Dorks cache: If you include other words in the query, Google will highlight those words within the cached document. For instance, [cache:www.google.com web] will show the cached content with the word “web” highlighted. This functionality is also accessible by clicking on the “Cached” link on Google’s main results page. The query [cache:] will show the version of the web page that Google has in its cache.

Cide Words (killing) BORED? Play our free word games – INTERACTIVE HANGMAN Have you ever noticed the connection between words like suicide, homicide, genocide, pesticide and fungicide? They all end in –cide, of course, but their meanings are linked too. They all concern death, destruction, extermination and deliberate killing.