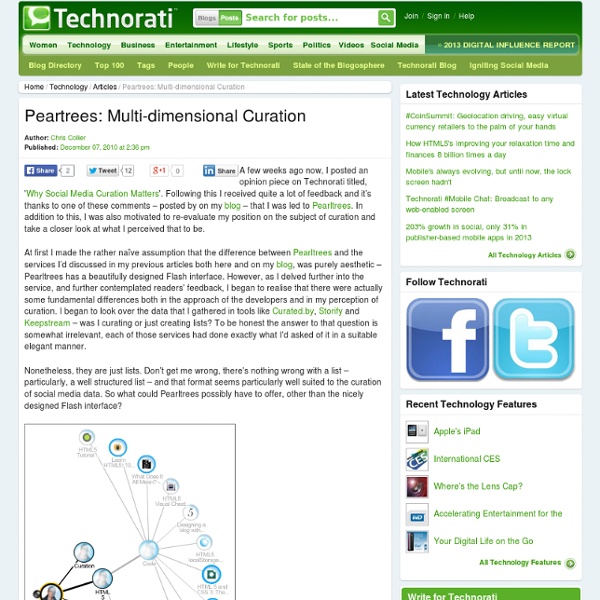 A few weeks ago now, I posted an opinion piece on Technorati titled, 'Why Social Media Curation Matters'. Following this I received quite a lot of feedback and it’s thanks to one of these comments – posted by on my blog – that I was led to Pearltrees. In addition to this, I was also motivated to re-evaluate my position on the subject of curation and take a closer look at what I perceived that to be. At first I made the rather naïve assumption that the difference between Pearltrees and the services I’d discussed in my previous articles both here and on my blog, was purely aesthetic – Pearltrees has a beautifully designed Flash interface. However, as I delved further into the service, and further contemplated readers' feedback, I began to realise that there were actually some fundamental differences both in the approach of the developers and in my perception of curation. Nonetheless, they are just lists. The answer can be summed up in one word, depth.

Pearltrees: What problem does Pearltrees solve Pearltrees Brings Your Interest Graph' to the iPad One of the more buzzword-y buzzwords in Silicon Valley right now is the "interest graph," which is supposed to connect people and the topics that they're interested in. Lots of startups promise to tap into the interest graph, but Pearltrees CEO Patrice Lamothe says a new app from his startup is "maybe the first time you actually see an interest graph." The new feature, which Lamothe variously describes as "visual discovery" (his pitch to the tech press) and "related interests" (what it's actually called in the app), is included in the just-launched iPad application from the previously Web-only company. Related interests have also been added to the Pearltrees website, but Lamothe is clearly more excited by the iPad version—he warned that the Web experience probably isn't quite as good. That kind of self-deprecation from a startup CEO is a little strange, except that the Pearltrees iPad app is pretty impressive.

pearltrees > blog Augmented Collective Intelligence 6 reasons to use Pearltrees Pearltrees is the first and largest social curation community on the Internet. It’s a place to organize, discover and share all the cool content you find online. However, beyond this basic definition, a question remains: why would I want to use Pearltrees? Well, what I want to share with you are six major use cases (or reasons) we’ve identified as being most popular across our entire community of web curators. In addition, I’ll also share with you a couple of interesting ways in which I have put Pearltrees to use for myself. Hopefully, you’ll not only get value in learning how the community uses Pearltrees, but also be inspired to find even more clever and creative ways to use our software yourself. 3. The problem is that aside from searching your personal twitter stream to get back to the cool stuff you tweeted there’s no great way to keep those links at hand. Note: For advanced users you can even hashtag the links you tweet with #PT and the name of a pearltree in your account (e.g.

Curation - The Third Web Frontier -SVW Posted by Guest Writer - January 8, 2011 Here is a guest article by Partice Lamothe - CEO of Pearltrees (Pearltrees is a consulting client of SVW.) This is a lightly edited version of "La troisième frontière du Web" that appeared in the magazine OWNI - Digital Journalism - March 2010. The article argues that the founding pricinciples of the Internet are only now being implemented and that the next frontier is in organizing, or curating, the Internet. By Patrice Lamothe Everyone realizes that the web is entering a new phase in its development. One indication of this transition is the proliferation of attempts to explain the changes that are occurring. Although these explanations are both pertinent and intriguing, none of them offers an analytical matrix for assessing the developments that are now underway. The "real time web," for example, is one of the clearest and most influential trends right now. In contrast, other explanations are far too broad to serve any useful purpose.