Sensory Evaluation for Cosmeceuticals. Men, emotional communication, and the challenge of empathy. Please see note below. 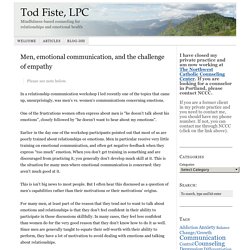 In a relationship communication workshop I led recently one of the topics that came up, unsurprisingly, was men’s vs. women’s communications concerning emotions. One of the frustrations women often express about men is “he doesn’t talk about his emotions”, closely followed by “he doesn’t want to hear about my emotions”. Earlier in the day one of the workshop participants pointed out that most of us are poorly trained about relationships or emotions. Men in particular receive very little training on emotional communication, and often get negative feedback when they express “too much” emotion.

When you don’t get training in something and are discouraged from practicing it, you generally don’t develop much skill at it. This is isn’t big news to most people. For many men, at least part of the reason that they tend not to want to talk about emotions and relationships is that they don’t feel confident in their ability to participate in those discussions skillfully. Now you're talking: making relationships work through positive communication. • Put-down. 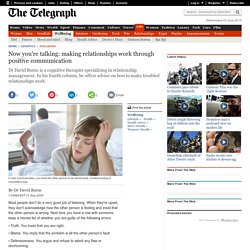 You speak harshly to make the other person feel inferior or ashamed. • Labelling. You call the person names. • Sarcasm. Your attitude, words, and tone of voice are belittling or patronising. • Counter-attack. . • Scapegoating. . • Diversion. . • Self-blame. . • Hopelessness. . • Denial. . • Help. . • Passive aggression. . • Mind reading. Now lend me your EAR… Good communication involves: skilful listening (empathy), effective self-expression (assertiveness), and caring (respect). Empathy is the first characteristic of good communication. Being assertive means that you are able to express your feelings openly, using "I feel" statements, such as "I'm feeling a bit uncomfortable right now". Respect Treat the other person with kindness, caring, and respect, even though you may feel frustrated and annoyed. . • Extract taken from 'Feeling Good Together: The Secret to Making Troubled Relationships Work' by Dr David Burns (Vermilion), which is available from Telegraph Books for £10.99 + £1.25 p&p.

Male Brain vs. Female Brain I. How Men Deal With Women’s Emotions (Men and Guilt) Part 2. Believe it or not, men tend to feel responsible for a lot, and until you probe the depths of their minds (good luck), you’re probably unaware of it. 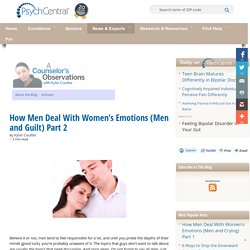 The topics that guys don’t want to talk about are usually the topics that need discussion. And once again, I’m not trying to say all men, just a vast majority. When a woman brings up ‘the talk’, which usually means going into an in-depth discussion about feelings and relationship processes, guys seem to cower. I mean literally; you can see them squirming in their seats sometimes. Or, if you’ve got something to complain about, depending on the type of man you’re with, they may become defensive, yell at you and try to turn the conversation back on you. A guy might say, “Yeah, he gets it, look at him nodding.” Whether defensive or overly apologetic (feeling guilty), both of these reactions are unhelpful.

It’s interesting, because this is the time when women need those problem-solving skills from their men. “You’ve made me upset. Men, Women, Emotions and Communication. How Men And Women Process Emotions Differently. Are women "wired" to be more emotional? 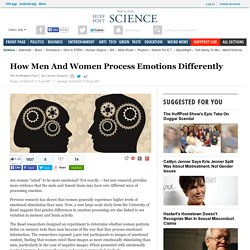 Not exactly -- but new research provides more evidence that the male and female brain may have very different ways of processing emotion. Previous research has shown that women generally experience higher levels of emotional stimulation than men. Now, a new large-scale study from the University of Basel suggests that gender differences in emotion processing are also linked to sex variation in memory and brain activity. The Basel researchers designed an experiment to determine whether women perform better on memory tests than men because of the way that they process emotional information. The researchers exposed 3,400 test participants to images of emotional content, finding that women rated these images as more emotionally stimulating than men, particularly in the case of negative images. After being exposed to the images, the participants completed a memory test.