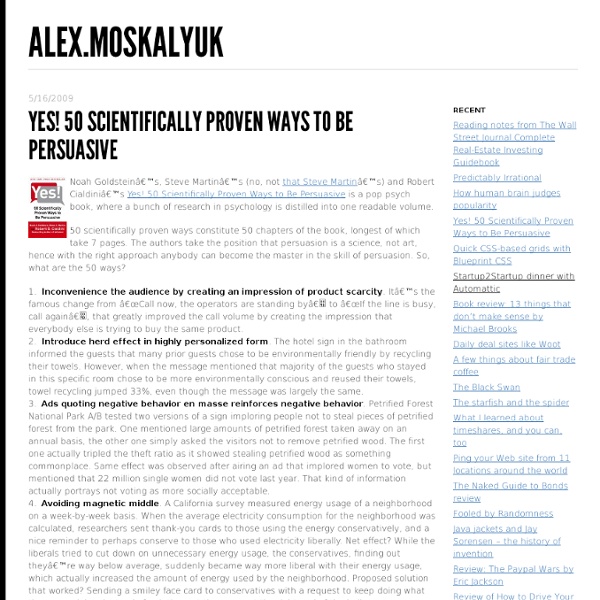 Noah Goldstein’s, Steve Martin’s (no, not that Steve Martin‘s) and Robert Cialdini’s Yes! 50 Scientifically Proven Ways to Be Persuasive is a pop psych book, where a bunch of research in psychology is distilled into one readable volume. 50 scientifically proven ways constitute 50 chapters of the book, longest of which take 7 pages. The authors take the position that persuasion is a science, not art, hence with the right approach anybody can become the master in the skill of persuasion. So, what are the 50 ways?

Color Psychology by David Johnson Like death and taxes, there is no escaping color. It is ubiquitous. Yet what does it all mean? Surprises in steel: The mystery behind Detroit entrepreneur's revolutionary Flash Bainite A Detroit entrepreneur surprised academics when he invented a heat-treatment that makes steel 7 percent stronger than any steel on record – in less than 10 seconds. That steel, now trademarked as Flash Bainite, has tested stronger and more shock-absorbing than the most common titanium alloys used by industry. Now Gary Cola is helping researchers at Ohio State University to better understand the science behind the new treatment, called flash processing. What they've discovered may hold the key to making cars and military vehicles lighter, stronger, and more fuel-efficient.

Welcome to Adobe GoLive 6 From Los Angeles Times: It's not all about you Chances are, others aren't judging you as harshly as you think, if at all. By Benedict Carey Times Staff Writer January 13, 2003 21 Things Lucky People Do Differently Get Healthy Living Newsletters: Did you ever look at someone and think, "He is so lucky. He has money, he's in a great relationship and wow -- what a great career, being able to travel like that?" Unstructured Thoughts by Taylor Davidson (@tdavidson) Below are the 25 most important lessons I’ve learned through close observation and first-hand experiences in how entrepreneurs and startups fail. The first sixteen primarily address strategic and operational issues, and the last nine deal more with management and organizational issues. I believe the three most important factors for any company are people, product and market, so I’m not sure that the ratio of ways to fail really fits my overall beliefs, but perhaps you’ll have ideas and lessons you’ve learned that will bring the ratio more in line. Read, and then comment: what would you add as reason #26? (Read on Slideshare) 1.

WHAT DO PHILOSOPHERS BELIEVE? The Visual CV: in a career spanning half a century, Sir Tom Courtenay has gone from a new-wave warrior to a grand old man, via a fool or two (usually called Norman). Irving Wardle picks his best roles on stage and screen From INTELLIGENT LIFE magazine, January/February 2013 1960 The SeagullArriving on the London stage as a RADA graduate from the fish docks of Hull, Tom Courtenay achieved overnight fame as Chekhov’s Konstantin.

Top 10 Things That Determine Happiness photo: meddygarnet Happiness is, by nature, a subjective quality with a definition like a moving target. There is scant evidence — qualitative or quantitative — to lend convincing support to those life variables most critical in determining individual happiness, which is likely why past researchers committed to the scientific method rarely tried to tackle the subject. This is changing. The Ultimate Cheat Sheet For Reinventing Yourself Editor’s note: James Altucher is an investor, programmer, author, and several-times entrepreneur. His latest book, is “Choose Yourself!” (foreword by Dick Costolo, CEO of Twitter) . Follow him on Twitter @jaltucher. Here are the rules: I’ve been at zero a few times, come back a few times, and done it over and over. I’ve started entire new careers.

Does Six Figure Renegade Scam People? Six Figure Renegade On The Web: Website URL: www.sixfigurerenegade.com Facebook URL: www.facebook.com/aleandershelton Twitter URL: www.twitter.com/alexshelton The Breakdown - Company Highlights The Six Figure Renegade website was created by Alex Shelton and has a variety of different sections. There is a blog, articles, and other free resources, however the primary focus seems to be on the Six Figure Renegade Membership. This is a monthly membership program that is primarily software-based, however there are training modules as well. Peter Principle An illustration visualizing the Peter principle The Peter Principle is a concept in management theory in which the selection of a candidate for a position is based on the candidate's performance in his or her current role rather than on abilities relevant to the intended role. Thus, employees only stop being promoted once they can no longer perform effectively, and "managers rise to the level of their incompetence." The principle is named after Laurence J.

Lesson Plan for Making a Speaker Laboratory ©1995 The Regents of the University of California by Regan Lum Introduction: A speaker is a device that converts an electronic signal into sound. The speaker you will build (see figure 1) consists of a Styrofoam or paper cup, a coil of wire, a permanent magnet, and a signal source. 10 More Common Faults in Human Thought Humans This list is a follow up to Top 10 Common Faults in Human Thought. Thanks for everyone’s comments and feedback; you have inspired this second list! It is amazing that with all these biases, people are able to actually have a rational thought every now and then. 21 Ways Rich People Think Differently World’s richest woman Gina Rinehart is enduring a media firestorm over an article in which she takes the “jealous” middle class to task for ‘drinking or smoking and socializing’ rather than working to earn their own fortune. What if she has a point? Steve Siebold, author of ‘How Rich People Think’ spent nearly three decades interviewing millionaires around the world to find out what separates them from everyone else. It had little to do with money itself, he told Business Insider.