For those who want to know: Reliable information on health, energy, media, war, elections, 9/11, more 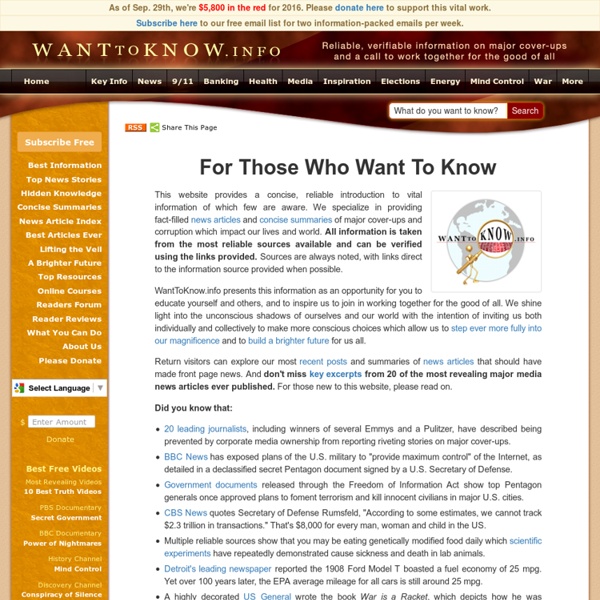 For Those Who Want To Know This website provides a concise, reliable introduction to vital information of which few are aware. We specialize in providing fact-filled news articles and concise summaries of major cover-ups and corruption which impact our lives and world. All information is taken from the most reliable sources available and can be verified using the links provided. Sources are always noted, with links direct to the information source provided when possible. WantToKnow.info presents this information as an opportunity for you to educate yourself and others, and to inspire us to join in working together for the good of all.

Why Warp Drives Aren't Just Science Fiction Astrophysicist Eric Davis is one of the leaders in the field of faster-than-light (FTL) space travel. But for Davis, humanity's potential to explore the vastness of space at warp speed is not science fiction. Davis' latest study, "Faster-Than-Light Space Warps, Status and Next Steps" won the American Institute of Aeronautics and Astronautics' (AIAA) 2013 Best Paper Award for Nuclear and Future Flight Propulsion. MOCKINGBIRD: The Subversion Of The Free Press By The CIA Notes to Letter of April 25, 1992: 1. Mark Hosenball, "The Ultimate Conspiracy", Washington Post, September 11, 1988, p.C1 2a. Julian Holmes, Letter to Washington Post Ombudsman Richard Harwood, June 4,1991. Notes that the Post censored, from the Anderson/Van Atta column, references to the Christic Institute and to Robert Gates.

Pre-Trail 2017 / Homeless and the Trail For those of you that don’t know my circumstances I am in a long term faith based recovery program here at the Panama City Rescue Mission in Panama City, Florida. I have been here since October 19th 2015, Its getting close to a year. Living at a mission is not easy, but it also will humble you real fast. In my case, I found out my problems that I thought would tilt the world off it’s axis and stop it from turning were nothing in comparison to others.

Intellectually-honest and intellectually-dishonest debate tactics – John T. Reed Copyright by John T. Reed This Web site is, in part, a debate between me and others with whom I take various issues. I welcome intellectually-honest debate. eclectic excerpts delivered to your email every day from editor Richard Vague Today's encore selection -- from Quantum: Einstein, Bohr, and the Great Debate about the Nature of Reality by Manjit Kumar. Albert Einstein (1879-1955), the physicist who developed the theory of relativity, was born and spent his earliest years in Germany: " 'The people of Ulm are mathematicians' was the unusual medieval motto of the city on the banks of the Danube in the south-western corner of Germany where Albert Einstein was born.

"D" Weapons Use Appliances to Spy on Homes, Internet as Cyber Battleground: “World War III is a Guerrilla Information War" Though it has remained officially unsaid, the powers that be have all-but-officially designated the American people as their enemy in a foggy battleground that has become global, nebulous, highly technological and extremely paranoid. Homeland Security and FBI protocol have set the stage for profiling Americans as potential threats, while the rising police state have often cracked down with a heavy hand and perhaps a SWAT raid. The War on Terror, global jihad, cyber attacks and a new Cold War have all contributed the necessary pretexts for an atmosphere of control and preemptive suspicion that seemingly justifies total surveillance of the population. USCYBERCOM, activated by the federal government in 2009 and operated by the director of the NSA, adds a whole new dimension to that, by bringing home – to computer screens and devices everywhere – the cyberwar. This digital surveillance age does not make spying on persons of interest merely possible or probable in any theoretical sense.

Four Homemade Cleaners This was easier than I thought it would be. One of Betsy’s goals for the year was to ditch some of our standard cleaners that we use around the house and make them! Honestly, I was a bit skeptical about this project mainly because I wasn’t sure that homemade cleaners would really get the job done. And my lovely wife is a bit of a neat freak so there’s no way she would use something that didn’t perform well. 3.6 Million-Year-Old Rare Skeleton Of Human Ancestor Revealed By Researchers In South Africa AncientPages.com – Researchers in South Africa have just presented “the most complete skeleton of a human ancestor older than 1.5 million years ever found.” The University of the Witwatersrand displayed the Virtually complete Australopithecus fossil dates back 3.6 million years and is the oldest fossil hominid in southern Africa. The fossil was given the nickname of “Little Foot” .