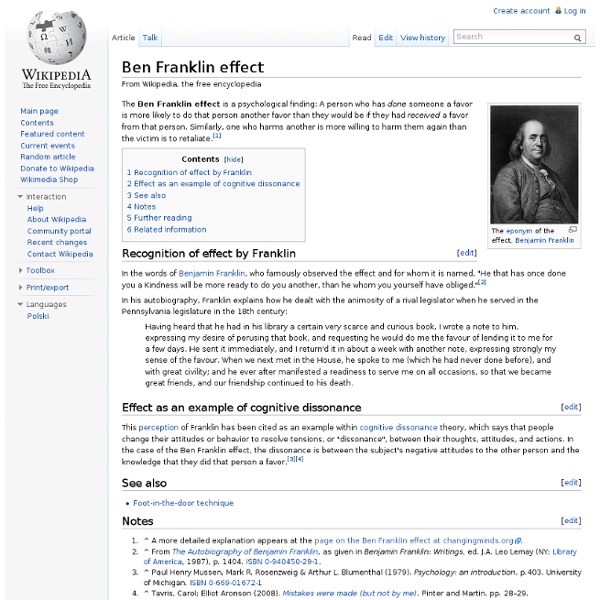 The Ben Franklin effect is a psychological finding: A person who has done someone a favor is more likely to do that person another favor than they would be if they had received a favor from that person. Similarly, one who harms another is more willing to harm them again than the victim is to retaliate.[1] Recognition of effect by Franklin[edit] In the words of Benjamin Franklin, who famously observed the effect and for whom it is named, "He that has once done you a kindness will be more ready to do you another, than he whom you yourself have obliged In his autobiography, Franklin explains how he dealt with the animosity of a rival legislator when he served in the Pennsylvania legislature in the 18th century: Having heard that he had in his library a certain very scarce and curious book, I wrote a note to him, expressing my desire of perusing that book, and requesting he would do me the favour of lending it to me for a few days. Effect as an example of cognitive dissonance[edit] Notes[edit] Related:  Manipulation and Persuasion

Welcome- The Incunabula Papers: Ong’s Hat MBTI Basics - The 16 MBTI Types Quiet, serious, earn success by thoroughness and dependability. Practical, matter-of-fact, realistic, and responsible. Decide logically what should be done and work toward it steadily, regardless of distractions. Take pleasure in making everything orderly and organized - their work, their home, their life. Value traditions and loyalty. Quiet, friendly, responsible, and conscientious. Seek meaning and connection in ideas, relationships, and material possessions. Have original minds and great drive for implementing their ideas and achieving their goals. Tolerant and flexible, quiet observers until a problem appears, then act quickly to find workable solutions. Quiet, friendly, sensitive, and kind. Idealistic, loyal to their values and to people who are important to them. Seek to develop logical explanations for everything that interests them. Flexible and tolerant, they take a pragmatic approach focused on immediate results. Outgoing, friendly, and accepting.

Foot-in-the-door technique The principle involved is that a small agreement creates a bond between the requester and the requestee. Even though the requestee may only have agreed to a trivial request out of politeness, this forms a bond which - when the requestee attempts to justify the decision to themselves - may be mistaken for a genuine affinity with the requester, or an interest in the subject of the request. When a future request is made, the requestee will feel obliged to act consistently with the earlier one.[5] The reversed approach - making a deliberately outlandish opening demand so that a subsequent, milder request will be accepted - is known as the door-in-the-face technique. Classic experiments[edit] In an early study, a team of psychologists telephoned housewives in California and asked if the women would answer a few questions about the household products they used. [edit] Environmental applications[edit] Examples[edit] "Can I go over to Suzy's house for an hour?" Charitable donation[edit] Notes

23 Tools To Brainwash and Influence People Through Media | Alterati ‘’till at last the child’s mind is these suggestions, and the sum of the suggestions is the child’s mind. And not the child’s mind only. The adult’s mind too all his life long. - Aldous Huxley, Brave New World The opinions and behaviors of people and societies are easily swayed. Now the power to rule the world and wag the cultural dog is at your fingertips. The 23 Tools: 1. 2. 3. 4. 5. 6. 7. 8. 9. 10. 11. 12. 13. 14. 15. 16. 17. 18. 19. 20. 21. 22. 23. By sticking to these simple premises you should be able to produce entire societies capable of ending world hunger, but too selfish to care. Devon White specializes in PR for the brain, promoting integrity, responsibility and conscious evolution through online video and lecture-performances on sex. As a trained hypnotist, video podcaster, writer and teacher, he supports broadcasting which goes beyond simple stimulus-response conditioning to engage the intentional, participatory and evolutionary functions of the brain. Like this:

Decision Points Explanations > Decisions > Decision Points Description | Discussion | So what Description Across any single activity or a set of related activities, there may be points at which decisions have to be made. These are decision points. Unless there are clear decision points, people often will continue with the momentum of the current activity. In the design or management of an activity, more or less decision points may be deliberately inserted or omitted. Example A person is given five small bags of popcorn. In retail situations there are clear decision points along the way, such as to stop and look in a window, to enter the shop, to try on clothes and to buy particular things. Business decision-making is more difficult as it often requires a number of people to agree before something is purchased, particularly if it is expensive. Discussion Decisions take time, effort, energy and expense, which together is sometimes called the transaction cost. Decision is affected by desires. See also

Female Victims of Sexual Violence, 1994-2010 Marcus Berzofsky, Dr.P.H., RTI, Christopher Krebs, Ph.D., RTI, Lynn Langton, Ph.D., BJS, Michael Planty, Ph.D., BJS, Hope Smiley-McDonald, Ph.D., RTI March 7, 2013 NCJ 240655 Presents trends in the rate of completed or attempted rape or sexual assault against females from 1995 to 2010. The report examines demographic characteristics of female victims of sexual violence and characteristics of the offender and incident, including victim-offender relationship, whether the offender had a weapon, and the location of the victimization. The report also examines changes over time in the percentages of female victims of sexual violence who suffered an injury and received formal medical treatment, reported the victimization to the police, and received assistance from a victim service provider. Highlights: From 1995 to 2010, the estimated annual rate of female rape or sexual assault victimizations declined 58%, from 5.0 victimizations per 1,000 females age 12 or older to 2.1 per 1,000.

Cialdini's Six Principles of Influence - Communication Skills Training from MindTools Convincing Others to Say "Yes" (Also known as the Six Weapons of Influence) How do you influence others? © iStockphoto/blackred You've come up with a fantastic idea for a new product. However, you haven't had much success with this in the past. Influencing others is challenging, which is why it's worth understanding the psychological principles behind the influencing process. This is where it's useful to know about Cialdini's Six Principles of Influence. In this article, we'll examine these principles, and we'll look at how you can apply them to influence others. About the Six Principles The Six Principles of Influence (also known as the Six Weapons of Influence) were created by Robert Cialdini, Regents' Professor Emeritus of Psychology and Marketing at Arizona State University. The six principles are as follows: 1. As humans, we generally aim to return favors, pay back debts, and treat others as they treat us. 2. Cialdini says that we have a deep desire to be consistent. 3. 4. 5. 6. Warning:

How to tell in 15 minutes whether someone likes you - by Bridget Webber Bridget Webber's image for: "Body Language that Shows when someone of the Opposite Sex Fancies you" Caption: Location: Image by: Wouldn't it be great to be able to tell within fifteen minutes whether someone likes you or not? The Eyebrow Raise The eyebrow raise is generally reserved for members of the opposite sex who like what they see, and it happens straight away. The Smile Although smiling can be faked, a genuine smile can easily be separated from a false one. A smile that is more of a grimace, or is delivered with lips firmly shut tight and downward turning corners of the lips, is a concerted effort rather than an indication that someone likes you. The Lean. If you are sat with a person who likes you, he or she is likely to lean in toward you as you converse. If you are standing, a person will stand close to you if he or she likes you, and give you full attention. Feet. Eye Contact Touching. When you like someone, you are drawn to touch him or her, even when you try not to! Mirroring.

The uses and abuses of 'happiness' The happiness 'movement' has the potential to transform society, but do its proponents know what they're doing? William Davies sets out four strands of the debate - philosophical, statistical, economical and psychological - and shows how confusion between them is hindering progress The launch of Action for Happiness last week generated yet more debate about the meaning and value of happiness. On top of the Office of National Statistics’ (ONS) ‘national debate’ on how to define and measure ‘national wellbeing’, one can scarcely open a newspaper nowadays without discovering more political, scientific or pseudo-scientific pronouncements about what does or doesn’t make us happy. In a nation as stubbornly curmudgeonly as Britain, it is no surprise to find that the cynics seem equally delighted to have discovered so much Californian chirpiness to grumble about, right here in their own backyard. There is no reason to dismiss any of this as a flash in the pan.

Control Explanations > Needs > Sense of Control Control is a deep, deep need | The control trap | So what? No, this is not so much about how to control people as about their needs around control. The real secret is the deep, deep need that people have for a sense of control. In persuasion, by managing how they feel about control, you can achieve far greater actual control. Control is a deep, deep need Perhaps the deepest need people have is for a sense of control. Note that the need is for 'a sense of control', not just for 'control'. One of the most disturbing things about having a terminal illness, as those who unfortunately suffer from such afflictions will tell you, is the feeling of powerlessness, of being unable to do anything about it. From an evolutionary standpoint, if we are in control of our environment, then we have a far better chance of survival. Other needs that lead to a sense of control include: A sense of certainty. Maslow revisited Take a look at the needs: Power and trust