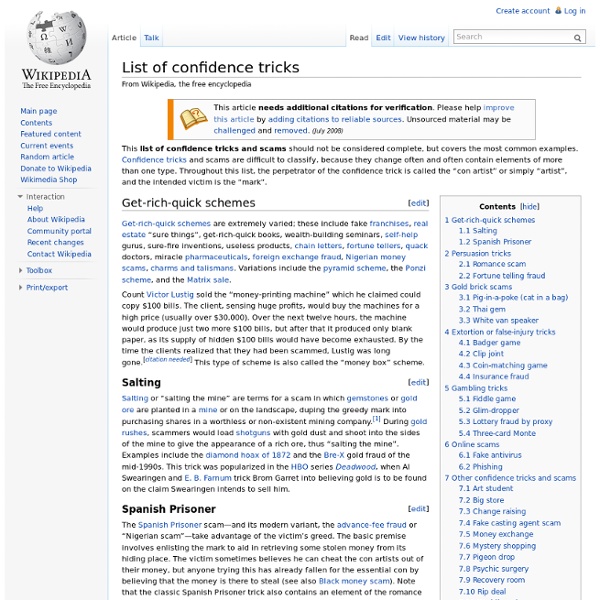 This list of confidence tricks and scams should not be considered complete, but covers the most common examples. Confidence tricks and scams are difficult to classify, because they change often and often contain elements of more than one type. Throughout this list, the perpetrator of the confidence trick is called the “con artist” or simply “artist”, and the intended victim is the “mark”. Get-rich-quick schemes[edit] Get-rich-quick schemes are extremely varied; these include fake franchises, real estate “sure things”, get-rich-quick books, wealth-building seminars, self-help gurus, sure-fire inventions, useless products, chain letters, fortune tellers, quack doctors, miracle pharmaceuticals, foreign exchange fraud, Nigerian money scams, charms and talismans. Count Victor Lustig sold the “money-printing machine” which he claimed could copy $100 bills. Salting [edit] Spanish Prisoner [edit] Many con men employ extra tricks to keep the victim from going to the police. Persuasion tricks[edit] Related:  Manipulation and Persuasion

Cold reading Basic procedure[edit] Before starting the actual reading, the reader will typically try to elicit cooperation from the subject, saying something such as, "I often see images that are a bit unclear and which may sometimes mean more to you than to me; if you help, we can together uncover new things about you." One of the most crucial elements of a convincing cold reading is a subject eager to make connections or reinterpret vague statements in any way that will help the reader appear to make specific predictions or intuitions. While the reader will do most of the talking, it is the subject who provides the meaning. After determining that the subject is cooperative, the reader will make a number of probing statements or questions, typically using variations of the methods noted below. Subtle cues such as changes in facial expression or body language can indicate whether a particular line of questioning is effective or not. Other techniques[edit] Shotgunning[edit] Warm reading[edit]

LARPwriting.org - Three Rules... In a discussion on another blog: I made a post I was so enamored with I am reproducing it here. Context aside, these are three good rules to use when GMing in any situation. Three rules: 1) Do not cater to crippled roleplayers.That's cruel, but it's right. Look some people can't roleplay their way out of a wet paper bag, or are simply too shy to get along in a group. But I can't fix broken roleplayers. My advice - be brutal and clear about this. 2) Do not overreactThe fact that Bob Roleplayer has a problem does not mean a problem exists. Stop...look...listen... Don't let someone else tell you that there is a problem. I will say offhand that the two areas where this gets ugliest are sex, cheating and safety. Take a deep breath. That's the basic rule. 3) Do not take bullshitThe final line is that rules and standards don't matter if there is bullshit going on. "Look Joe, I hear all you're saying about Cathy cheating in the game.

Decision Points Explanations > Decisions > Decision Points Description | Discussion | So what Description Across any single activity or a set of related activities, there may be points at which decisions have to be made. Unless there are clear decision points, people often will continue with the momentum of the current activity. In the design or management of an activity, more or less decision points may be deliberately inserted or omitted. Example A person is given five small bags of popcorn. In retail situations there are clear decision points along the way, such as to stop and look in a window, to enter the shop, to try on clothes and to buy particular things. Business decision-making is more difficult as it often requires a number of people to agree before something is purchased, particularly if it is expensive. Discussion Decisions take time, effort, energy and expense, which together is sometimes called the transaction cost. Psychologically, decisions play to the need for a sense of control. See also

Nightclub Security, Managing Obnoxious Patrons, security consultant, Chris McGoey, nightclub security expert Managing Obnoxious Patrons Nightclubs and bars can be an exciting business, but with it comes special problems. Trendy nightclubs attract a younger crowd looking for a place to party. The notoriety of a hot club brings crowds of young men and women who will stand in line for hours just to be part of the nightclub scene. This sounds like nightclub owner’s dream, but with that success comes control problems associated with young adults, too much testosterone, alcohol, and drugs all crowded together in a small space. Because of this, nightclubs need to have a security plan in place when obnoxious or intoxicated patrons cause trouble. Customer Contacts Contact with an obnoxious customer should begin at the first sign of trouble. When it’s Time to Go Unfortunately, in any nightclub a time will come when a patron must be asked to leave. If you used the progressive warning system described above then the job is easier. Use of Force When to Call the Police? Nightclub & Bar Security Articles

A Fake is a Fake. Anyway Northern Ireland | &#039;Elf&#039; lingerie thief found guilty A man who dressed up as Buho, a female elf, has been convicted by a jury at Belfast Crown Court of taking underwear from a shop in a knifepoint raid. Robert Boyd, 45, from Broadlands in Carrickfergus, held up staff at the Orchid shop in Belfast disguised in a wig, hat and glasses. He told the court he had been in a role-playing game at the time and may have blurred reality and fantasy. Boyd was released on bail. Sentencing was adjourned for probation reports. In court on Thursday, ten jurors dismissed Boyd's defence and two believed it. During the three-day trial, the jury heard that Boyd wore a disguise of a blonde curly wig, reading glasses and a beany hat. He armed himself with a knife before stealing two sets of bras, pants, suspender belts and stockings from the lingerie shop on the Lisburn Road. The Queen's University senior lab technician was arrested within moments of the robbery on 14 December 2005. Fantasy "I didn't mean it to happen," he later told detectives.

How to Start a Conversation With Someone on the Train, Bus or Subway - WikiHow Edit Article Edited by VideoJug.com, Will, Dave Crosby, Jack Herrick and 44 others Have you ever wanted to talk to an attractive person on the bus or train but ended up waiting too long and letting him or her get away? Follow these steps to quickly spark a conversation the next time you're smitten, and never lose the love of your life (or at least the love of the week) again. Ad Steps 1Understand the environment. 10Keep conversing. Tips If the person is sitting and you're standing, position yourself so that your crotch isn't in the person's face.When making eye contact, keep your facial expression light and friendly, rather than straight and serious.It can take some courage to actually talk to a stranger on the bus or train, but remember that this is really an ideal situation. Warnings While the eye-contact test is a good way to gauge a person's interest in you, it's easy to misconstrue an innocent glance or, sometimes, a look of disgust for interest.

HOW TO CHEAT AT EVERYTHING Over lunch with Simon Lovell, a fascinating former card shark, Allison Schrager learns all sorts of things about how swindlers operate ... Special to MORE INTELLIGENT LIFE "I can spot someone's weakness a mile away. In any room I can pick out the best target," says Simon Lovell, reformed con artist and famed magician, when asked over lunch about the root of his talents. "Take that woman over there." He motions across the room towards a lady speaking to a man engrossed in his menu--"vulnerable, needy, looking for attention from the man she is with, but he won't give it to her. "Or that man over there, over-dressed, too neat, over-confident, thinks he is too smart to be taken." "But ultimately, anyone can be conned, if you have the balls to do it." Simon Lovell should know. Presently, instead of subjecting people to cons, Mr Lovell stars in a one-man off-Broadway show, "Strange and Unusual Hobbies". It requires avid study of psychology and body language. But I would make a poor con artist.

Jeepform, Freeform and Terminology Please observe that the lists below are NOT manifestos. They may be thought of as de-facto jeep tradition, or they may be thought of as guidelines. They are good for making decisions, either agreeing or disagreeing with points. In some sense, they loosely describe Jeepform, the kind of freeform role-play at the heart of Vi åker Jeep's games. Jeep Truths for Gamewrights and Game Masters Restrictions foster creativity.You basically cannot go wrong by letting people succeed (which doesn't necessitate doing so).You should always have a message or premise. The Jeepform Piece of the Cake The following is an attempt at jotting down some techniques that we've invented/stolen/loved/hated/... over the years. Allegoric play (Syn: Metaphoric play) Allegoric play is just as the name suggests, expressing parts of the story through allegories, playing a metaphor of something instead of the actual thing. Bird-in-ear Example: Four persons are sitting in a car. Four persons are walking through a dark forest.

Collision Imminent! Come join the unexpected end of the maiden voyage on the newest and most luxurious starliner of the Imagineerium™ fleet. Play one of the crew or several of the passengers in this fast-paced horde style LARP that was a smash hit at Intercon 15.5, Intercon A, Arisia 2003, OurCon XII, WPI, Dexcon VII, Intercon G, Intercon J, Conception 2012, SLAW 2012, and Fabulous Consequences! The next run: March 2nd, at Intercon M, in Chelmsford, Massachusetts. This game is thirteen years young, and it's still a blast to play and run. More about the game... Collision Imminent! If you have any questions or comments for the original Imagineerium™ team, we'd love to hear from you!